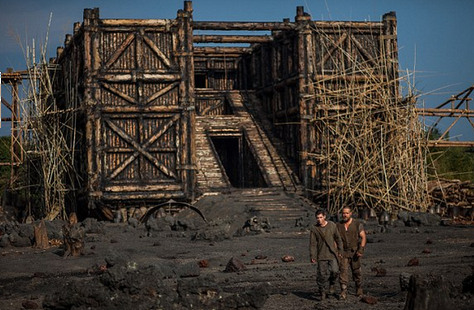 – Scientists: Noah’s Ark Would Have Floated With 70,000 Animals If Built By Dimensions In The Bible (Business Insider, April 3, 2014):

Scientists at the University of Leicester have discovered that Noah’s Ark could have carried 70,000 animals without sinking if built from the dimensions listed in The Bible.

Noah’s Ark would have floated even with two of every animal in the world packed inside, scientists have calculated.

Although researchers are unsure if all the creatures could have squeezed into the huge boat, they are confident it would have handled the weight of 70,000 creatures without sinking.

A group of master’s students from the Department of Physics and Astronomy at Leicester University studied the exact dimensions of the Ark, set out in Genesis 6:13-22.

According to The Bible, God instructed Noah to build a boat which was 300 cubits long 50 cubits wide and 30 cubits high – recommending gopher wood for the enormous lifeboat.

The students averaged out the Egyptian and Hebrew cubit measurement to come up with 48.2cm, making the Ark around 144 metres long – about 100 metres shorter than Ark Royal.

Using the dimensions, the Archimedes principal of buoyancy and approximate animal wrights they were astonished to find out that the Ark would have floated.

Student Benjamin Jordan, 21, from Bury St Edmonds, said: “Using the dimensions of the Ark and the density of the water, we were able to calculate its buoyancy force, which, according to Archimedes’ principle, is equal to the weight of the volume of fluid the object displaces.

“This meant we were then able to estimate the total mass the Ark could support before the gravitational weight would overcome the buoyancy force, causing the Ark to sink.”

Previous research has suggested that there were approximately 35,000 species of animals which would have needed to be saved by Noah, enabling the students to conclude that the dimensions given in the Bible would have allowed Noah to build an ark that would float with all of the animals on board.

The students had to swap gopher wood for cypress wood, as Biblical experts continue to speculate as to what gopher wood might be. Some think it may just mean plained timber.

Student Thomas Morris, 22, from Chelmsford, said: “You don’t think of the Bible necessarily as a scientifically accurate source of information, so I guess we were quite surprised when we discovered it would work. We’re not proving that it’s true, but the concept would definitely work.”

It is a separate matter whether all of the animals would fit inside an ark of these dimensions – the physics students were simply calculating the buoyancy of the ark.

The students presented their findings in a paper for the Journal of Physics Special Topics, a peer-reviewed student journal run by the University’s Department of Physics and Astronomy.

Course tutor, Dr Mervyn Roy, a lecturer in the University of Leicester’s Department of Physics and Astronomy, said: “The students are encouraged to be imaginative with their topics, and find ways to apply basic physics to the weird, the wonderful and the everyday.”

Student, Katie Raymer, 22, from Whitstable added: “Every other module that we do is a lot more serious and so the Physics Special Topics module was nice to do something different – allowing us to apply basic physics to something a bit more fun.”

1 thought on “Scientists: Noah’s Ark Would Have Floated With 70,000 Animals If Built By Dimensions In The Bible”