Remember that (laughable) agreement that was signed less than 24 hours ago and was grandly endorsed by all European nations, and which delineated the next legal presidential election sometime between September and December? Good times.

With 328 (of the 450 seats) voting in favor, the Ukraine parliament has agreed to removed President Viktor Yanukovych:

“Yanukovych, in an illegal manner, removed himself from his constitutional duties,” Turchynov says in chamber before vote. The Russians are not at all happy with Siluanov exclaiming these actions “pose a direct threat to Ukraine’s sovereignty and constitutional order.”

I believe the nation will survive divided for there is far too much resentment to simply put this all behind and walk forward. Divide Ukraine along the historical language faultline and there is a chance to calm things down. Otherwise, this will flare up and take others with it.

My position is consistent – ALL governments are only a necessary evil. They should never be allowed to have such power over the people for it will also be abused to sustain that same power. It does not matter what form of government – they are all the same. 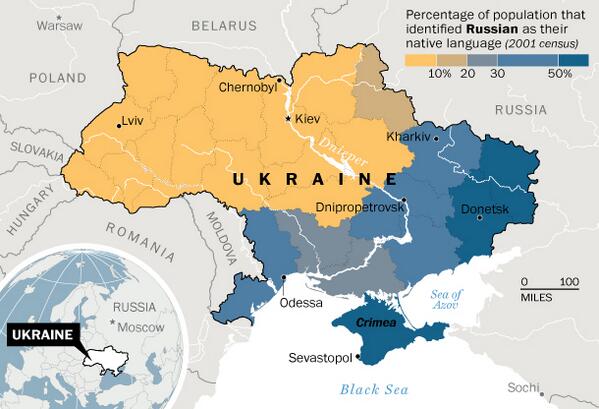 In the minds of so many western journalists, yesterday’s “deal” to reform the constitution, hold new elections in 10 months or so, and generally all ‘just get along’ was a victory but this morning it is clear that very little has changed.

Late last night Ukraine time, President Yanukovych (and some of his key advisers) fled Kiev (amid so-called threats) and headed to the eastern part of the country. Then following rumors he would resign, he stated in a TV address that he would not and that pro-EU forces had staged a “coup d’etat”. This has left a troubled nation with just as divided a future as protesters have taken back control of Kiev.

Russia is not happy; blaming extremists for threatening order.

The government has moved in his absence:

Putin will not be happy:

Russia’s foreign minister on Saturday accused Ukraine’s opposition of failing to fulfill its side of a peace deal intended to end the nation’s political crisis and urged Western mediators to intervene.

Foreign Minister Sergey Lavrov called his German, French and Polish counterparts, who helped broker Friday’s agreement between Ukrainian President Viktor Yanukovych and the opposition. Yanukovych agreed to hold early elections this fall and surrender much of his powers, but opposition supporters have kept pushing for his immediate dismissal.

The Russian Foreign Ministry said Lavrov urged his counterparts to use their influence with the Ukrainian opposition, which he said “not only has failed to fulfill any of its obligations, but keeps making new demands under the influence of armed extremists and rioters.”

Their actions “pose a direct threat to Ukraine’s sovereignty and constitutional order,” he said. 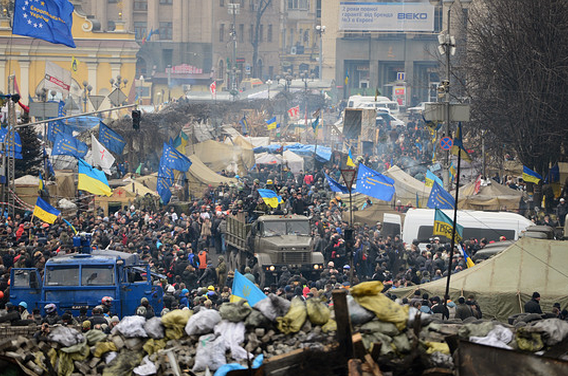