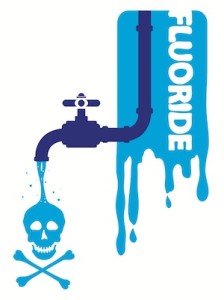 Exposure to fluoride is a contentious topic, mostly because exposure is everywhere. Not only is fluoride a common ingredient in toothpaste, many municipalities have a fluoridated water supply. Why? Well, the reason we’re given is that it encourages oral health… even though it’s not known to prevent harmful oral bacteria. [1] What is known is that fluoride is toxic. In fact, the number one reason for poison control calls concerning fluoride are for children who’ve eaten toothpaste. [2] [3] Long-term ingestion is harmful to the brain, digestive system, heart, bones… even the tooth enamel it’s supposed to help. [4] [5] [6] These next 9 shocking facts will make you take a second look at your exposure to fluoride.

Skeletal fluorosis is a condition resulting from fluoride consumption. The liver is unable to process fluoride, thus it passes into the bloodstream where it combines with calcium that’s been leeched from the skeletal system. You’re left with weak bones, otherwise known as skeletal fluorosis. The risk has been known about for decades yet it’s not been established how much exposure will trigger skeletal fluorosis… and the impact it has on quality of life is horrendous. [7] [8] [9] The best way to protect yourself is to avoid fluoride. Recently, Chinese authorities established a link between reductions in fluoride exposure and the incidence of fluorosis. [10]

Fluoride has been shown to cause calcification of cartilage, the essential tissue for joint health. [11] Degenerative osteoarthritis has been linked to skeletal fluorosis. [12] And in a study of individuals suffering from fluorosis, osteoarthritis knee conditions occurred frequently. [13]

3. Toxic to the Thyroid

Iodine and fluoride belong to a family of compounds known as halogens. Although iodine is beneficial to the thyroid, fluoride is not. However, because of the similarities, the thyroid can absorb fluoride instead of iodine. This is bad. Fluoride is toxic to thyroid cells; it inhibits function and causes cell death. [14] For decades, fluoride was used to reduce thyroid function in individuals suffering from an overactive thyroid. [15] Now — and pay attention to this — the range used in water fluoridation matches the levels typically used to reduce thyroid function. [16]

Although the full capabilities of the pineal gland have been the subject of debate for centuries, it’s known for certain that, at a minimum, the pineal gland regulates body rhythms and wake-sleep cycles; two extremely important functions. Fluoride is especially toxic to the pineal gland, where it accumulates and calcifies the gland. In fact, by the time the average person reaches old age, their pineal gland will have higher calcium density than their bones. [17]

It also deserves mention that the pineal gland plays an integral role in the onset of puberty. Research has shown that girls living in areas prone to more fluoride exposure experience puberty earlier than girls exposed to less. [18] Fluoride’s damaging effect on sexual function only begins here…

6. Harmful to Male and Female Fertility

A direct link exists between fertility rates and fluoridated drinking water. Higher levels of fluoride correspond to lower fertility rates, particularly with drinking water levels of 3 ppm. [19] Animal models show that fluoride reduces reproductive hormones in females. [20] Men have it just as bad; those suffering from fluorosis have lower testosterone and fertility than men with limited fluoride exposure. [21]

Fluoride is toxic to the kidneys and a higher rate of chronic kidney disease has been reported in areas where the water contains high levels of fluoride. [22] [23] According to Chinese researchers, a fluoride level of 2 mg/L is all it takes to cause renal damage in children. [24] While water fluoridation levels are often much lower than this, the fluoride bombardment continues with toothpaste and other sources.

8. Harmful to the Cardiovascular System

The Fluoride Action Network reports that, as of May 2013, 43 studies have examined the effect of fluoride on human intelligence. The results should motivate anyone to minimize their fluoride exposure. One observation is that fluoride negatively impacts children’s neural development. [27] Another is that children living in highly fluoridated areas have up to five times greater chance of developing a low IQ compared to those who do not. [28]

Reducing Your Exposure to Fluoride

Using non-fluoride toothpaste can immediately reduce your fluoride exposure. Maintaining healthy iodine levels can help protect the thyroid from fluoride. Fluoridated water is the largest concern and most water filters are not adequate for removing fluoride; instead look to a reverse osmosis water purification systems.

Have you made efforts to reduce your exposure and minimize the dangers of fluoride? What tips do you have? Please leave a comment below and share with us.