– These Were The Best And Worst Performing Assets In January (ZeroHedge, Feb 3, 2014):

The first in 2013 – namely the Nikkei, because oddly enough everyone ignores that hyperinflation “success story” that is the Caracas stock market, was last in January. And vice versa: the best performing asset last month was the barbarous relic which every Keynesian “expert” once again left for dead in the last year, roundly ignoring that it has been the best performing asset class since the Lehman collapse. 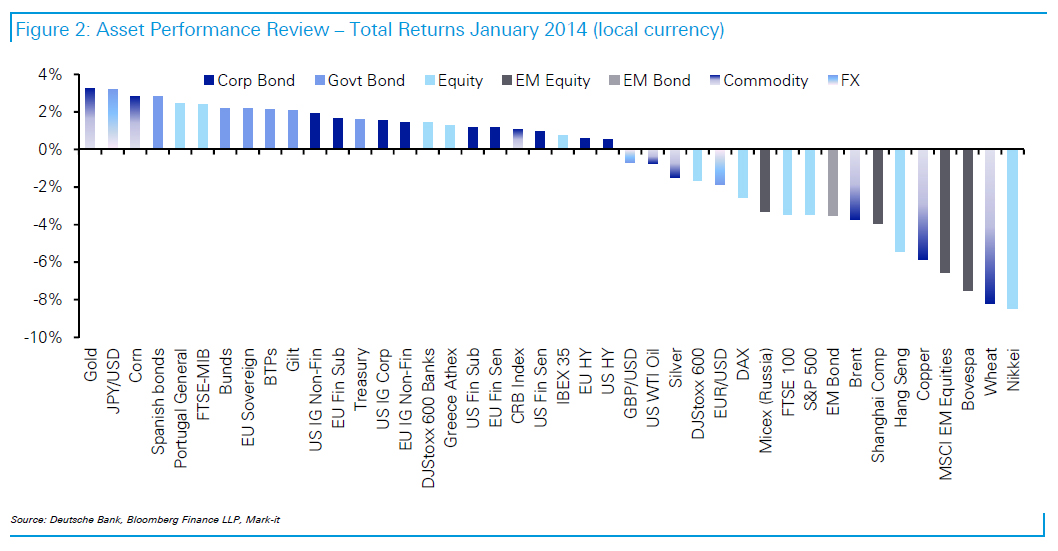 Some additional commentary from Deutsche Bank:

It’s been a turbulent start to the year as EM developments as well as arguably softer global economic data have seen risk sentiment turn negative. The clear outperformers have been DM fixed income and European peripheral equities, whilst it has been a very tough month for other DM equities as well as most EM assets. The performance of commodities has been somewhat mixed.

A difficult 2013 for EM has continued into the start of 2014. Key equity indices have seen notable falls with the MSCI EM index down -6.6%. Bonds have also come under pressure with overall government bond returns of -3.5% led largely by performance of EMEA bonds (-6.3%). The most notable negatives in EM have come in FX. In Figure 1 we show the performance of a number of key EM currencies in January. They have all declined vs. the Dollar with the Argentinean Peso the obvious underperformer falling nearly 19%. There has also been significant weakness in RUB, HUF, TRL and ZAR, which have all fallen by more than 5% against the Dollar.

It has also been a tough month for DM equities. Despite a decent start to the month in Europe, where the DJ Stoxx 600 had returned as much as +2.5% to the 22nd Jan, the negative EM developments saw a notable swing in sentiment and the index eventually ended the month down -1.6%. In the US the S&P 500 has only briefly touched its end of year high and has returned -3.5% on the month. Asian indices have probably seen the worst of the performance with the Nikkei and Hang Seng returning -8.4% and -5.5% respectively. The only real bright spot for DM equities has come from the periphery of Europe where returns have still generally been positive with Ireland (+2.5%), Portugal (+2.5%) and Italy (+2.4%) seeing the best of the performance.

In contrast to the performance of DM equities, DM fixed income has had a solid start to the year as core government bond yields have generally fallen. Despite the fact that the Fed has started to taper QE, the 10 year Treasury yield has fallen 38bps, which has helped the Treasury index return +1.6% in January. Similarly the 10 year Bund and Gilt yields have fallen 27bps and 32bps respectively with the indices returning +2.2% and +2.1% respectively. Spanish government bonds (+2.8%) have seen the best of the performance. The move in government bonds has also helped corporate credit to produce positive returns despite indices generally widening in spread terms. IG has outperformed HY in the sell-off but credit has held in reasonably well considering the issues elsewhere. In USD credit IG non-financials (+1.9%) have seen the best of the performance while in GBP it has been financials (senior +2.3% and sub +1.9%).

Subordinated financials (+1.7%) have seen the best of the performance in EUR credit after a strong start. Interestingly none of the sub credit components in our performance review have seen negative total returns.

Finally commodities, which have had a mixed month. Overall the CRB index rose +1.1% helped by gains in gold (+3.2%) and corn (+2.8%) while other key commodities were generally down on the month including wheat (-8.2%), copper (-5.9%) and sugar (-5.2%). All the returns above are in local currency. We chart the returns in both local currency and Dollar terms in the pdf.