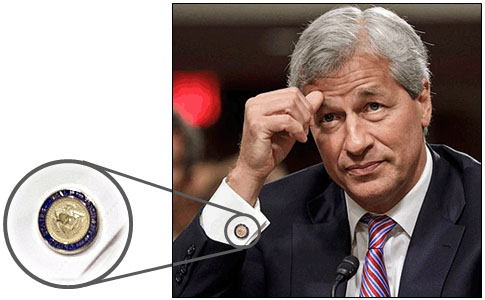 In more than one picture, Dimon was seen with the seal cufflinks visible. The seal reads “Seal of the President of the United States” and includes the arrow-carrying eagle.

Earlier this week we reported that at JPMorgan, the many will pay for the crimes of the few, after the bank revealed that compensation for most workers would be flat with 2012, and no raises were planned for the bank’s employees as a result of the massive, $20+ billion legal bill the bank has raked up in recent months as one after another market manipulation, fraud and malfeasance by current and former JPM workers has been revealed. One person, however, will be exempt from this blanket punishment: the firm’s CEO Jamie Dimon, of course. Because there is always a reason Jamie is richer than you…

A year after an embarrassing trading blowup led to millions of dollars being docked from Jamie Dimon’s paycheck, the chairman and chief executive of JPMorgan Chase is getting a raise.

JPMorgan’s board voted this week to increase Mr. Dimon’s annual compensation for 2013, hashing out the pay package after a series of meetings that turned heated at times, according to several executives briefed on the matter. The raise — the details were not made public on Thursday — follows a move by the board last year to slash Mr. Dimon’s compensation by half, to $11.5 million.

When it made that deep pay cut, the board was giving a stern rebuke over the fallout from the “London Whale” multibillion-dollar trading blunder. This week, directors, gathered in a conference room at the bank’s Park Avenue headquarters overlooking a snow-covered Central Park, discussed what message their next decision on the bank chieftain’s compensation would send.

The debate pitted a vocal minority of directors who wanted to keep his compensation largely flat, citing the approximately $20 billion in penalties JPMorgan has paid in the last year to federal authorities, against directors who argued that Mr. Dimon should be rewarded for his stewardship of the bank during such a difficult period. During the meetings, some board members left the conference room to pace up and down the 50th-floor corridor.

So what was the premise for the Dimon majority faction on the board to give him a raise?

“Mr. Dimon’s defenders point to his active role in negotiating a string of government settlements that helped JPMorgan move beyond some of its biggest legal problems. He has also solidified his support among board members, according to the people briefed on the matter, by acting as a chief negotiator as JPMorgan worked out a string of banner government settlements this year.”

Well, “active role in negotiating settlements” sure is a new way to describe lying before congress about tempests in teapots. But at this point we are all well beyond the laughing stage. As for JPM’s workers: we are confident they are delighted that while they get paid the same, their uberboss can afford one more fifth home. 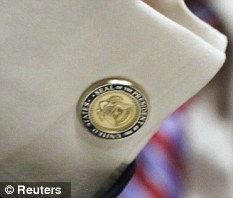