Gold has been in a bear market for some two years now. As a result of this, many investors believe that the precious metal is no longer a viable investment. 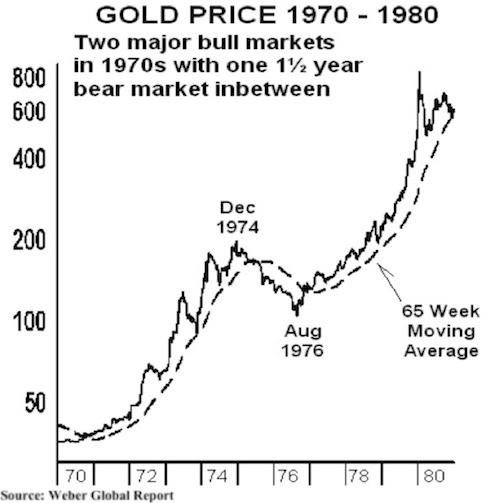 With that in mind, I believe the next leg up in Gold could very well be the BIG one. Indeed, based on the US Federal Reserve’s money printing alone Gold should be at $1800 per ounce today.

Moreover, at $1,800, Gold is Still Nowhere Near Its All-Time High

Now, a lot of commentators have noted that gold is already trading above its 1980 high ($850 an ounce). What they fail to note is that thanks to inflation, $1 in the ‘70s is worth a LOT MORE than a $1 today.

For gold to hit a new all time high adjusted for inflation, it would have to clear at least $2,193 per ounce. If you go by 1970 dollars (when gold started its last bull market) it’d have to hit $4,666 per ounce.

Bottomline: gold is nowhere near a peak adjusted for inflation. And when the next leg up begins, we could see a tremendous move.

For a FREE report outlining how to buy Gold at $273, swing by: