And now, the saddest chart of the day: Greek poverty since the crisis, and in 2013, when the so-called “Grecovery” arrived. 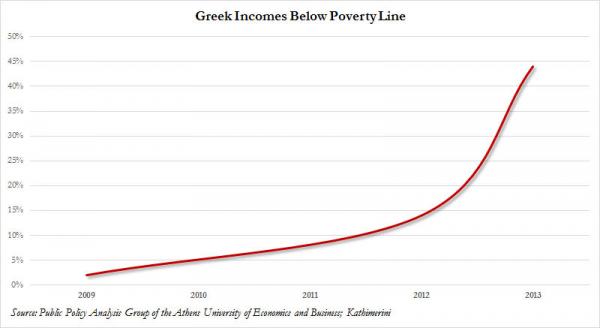 Here is how Greek Kathimerini describes the fact that nearly half of all Greek incomes, some 44%, had an income below the poverty line in 2013 according to estimates by the Public Policy Analysis Group of the Athens University of Economics and Business (AUEB).

The poverty threshold is measured as 60 percent of the price-adjusted average income in 2009, or up to 665 euros per person per month and up to 1,397 for a couple supporting two underage children. The AUEB researchers also found that last year 14 percent of Greeks earned below the adequate living standards, compared with 2 percent of the population four years ago.

The blame, of course, was placed squarely on austerity, or the fact that Greece, whose epic socio-economic problems stem primarily from its massive overleveraging leading up to 2008, did not leverage some more to “fix” itself.

The group’s report, published last week, suggested that during the crisis instead of strengthening support to the unemployed – which is one of the most efficient methods to rekindle demand – the state was forced to reduce it.

Well, not all the blame: some was reserved for where it rightfully resides: an incompetent, corrupt, crony and quite criminal political system:

… besides the austerity policies of the last few year, the inability of the state to contain the collapse of social structures is due to the lack of targeted strategies and to the inefficient use of resources, problems that dogged Greece even before the onset of the crisis.

No mention that Greece was merely a pawn in the “political capital” invested in the failed Eurozone experiment, in which the main thing at stake is the vested interest of the legacy oligarchs and, of course, the bankers.

As for the Greece: don’t cry for it – it still has the euro – that symbol of successful European integration – so all is well. 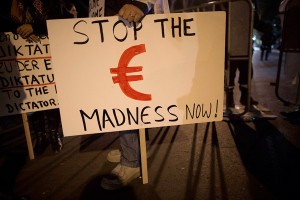 2 thoughts on “Poverty In Greece (Chart Of The Day)”