– The FBI Admits its Primary Focus is NOT Law Enforcement (Liberty Blitzkrieg, Jan 7, 2014):

Recently, the FBI made a significant change to its self-proclaimed primary focus in its fact sheet from “law enforcement” to “national security.” This change merely confirms what I and countless others have claimed to be true for quite some time. That the entire regulatory, security and intelligence apparatus of these United States has been redirected away from protecting the Constitution and the rule of law, toward a narrow focus on protecting the economic and social positions of the oligarch class at all costs under the guise of a “war on terror.” We have seen many signs of cronyism at the FBI for decades now, something most accurately pointed out in the priceless image “All My Heroes Have FBI Files.”

While this change to the FBI fact sheet is just confirmation of something we already knew, it’s still mind-boggling to see it shoved right in our faces: 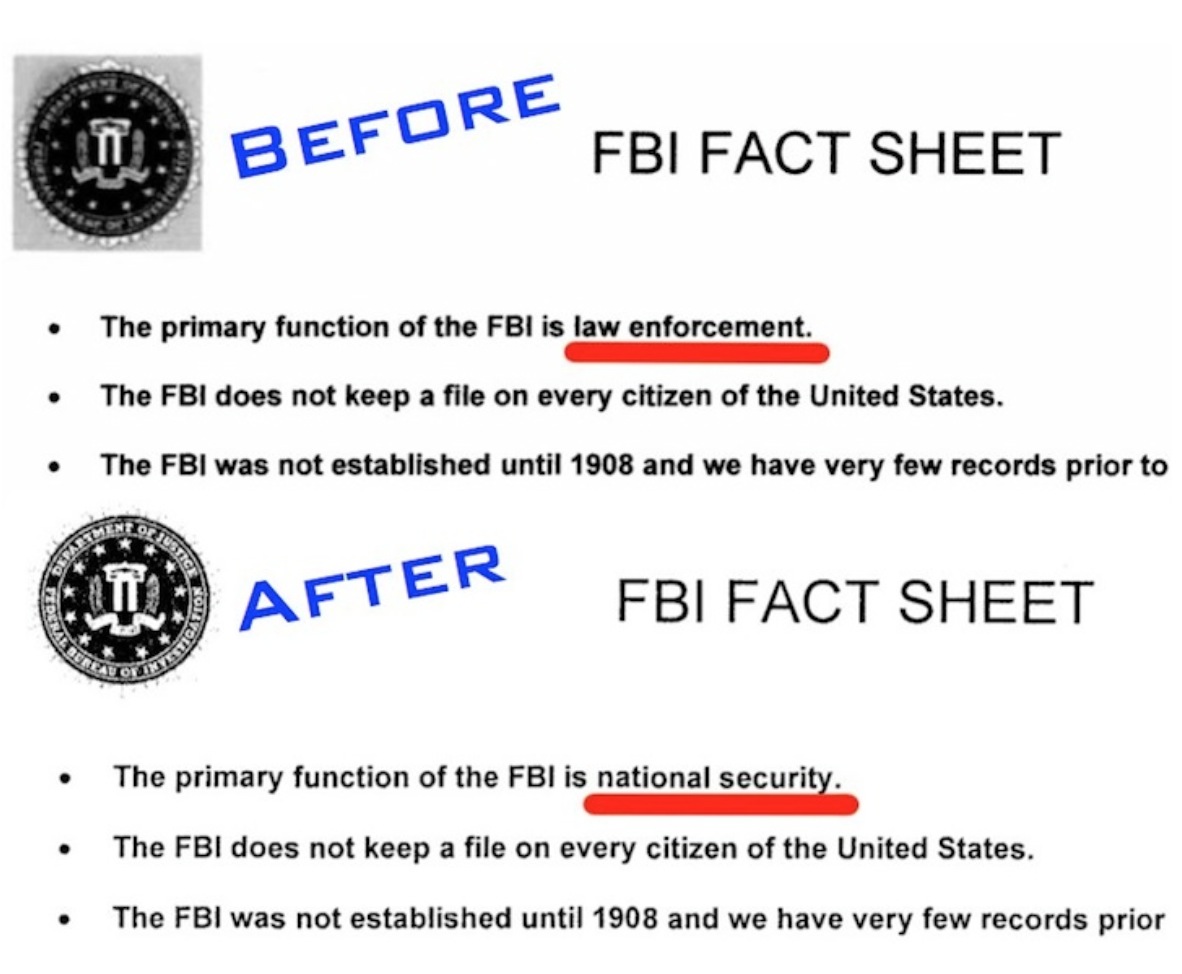 TechDirt covered this story well. Here are some excerpts:

A couple years ago, it was revealed that the FBI noted in one of its “counterterrorism training manuals” that FBI agents could “bend or suspend the law and impinge upon the freedoms of others,” which seemed kind of odd for a government agency who claimed its “primary function” was “law enforcement.” You’d think that playing by the rules would be kind of important. However, as John Hudson at Foreign Policy has noted, at some point last summer, the FBI quietly changed its fact sheet, so that it no longer says that “law enforcement” is its primary function, replacing it with “national security.”

Of course, I thought we already had a “national security” agency — known as the “National Security Agency.” Of course, while this may seem like a minor change, as the article notes, it is the reality behind the scenes. The FBI massively beefed up resources focused on “counterterrorism” and… then let all sorts of other crimes slide. Including crimes much more likely to impact Americans, like financial/white collar fraud.

All of these efforts to stop their own damn “plots” screams of an agency that feels it needs to “do something” when there’s really nothing to be done. Thousands of agents were reassigned from stopping real criminals to “counterterrorism” and when they found there were basically no terrorists around, they just started making their own in order to feel like they were doing something… and to have headlines to appease people upstairs. The government seems to have gone collectively insane when it comes to anything related to “terrorism.”

Once again ladies and and gentlemen: USA! USA!