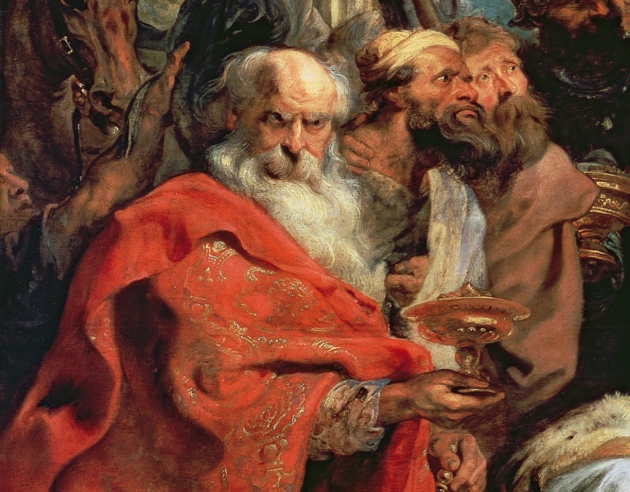 Mercury released from the red pigment in Adoration of the Magi (Peter Paul Rubens, 1624) has formed black stains in some places.

The pigment vermilion has been a favourite of artists for centuries, but it is notorious for turning black as it degrades over time. But the source of the black colouring, found in works ranging from ancient Roman frescoes to the baroque paintings by Peter Paul Rubens, has been unclear. Now researchers have shown that the culprit is elemental mercury, which forms under exposure to light and chlorine ions in the air. The finding is the first step to devising a way for conservators to prevent further degradation of historic masterpieces.

Vermilion, also known as cinnabar, is a mineral made of the elements sulphur and mercury. In 2005 Katrien Keune, a chemist at the University of Amsterdam, and her colleagues showed that the compound can be broken down through a series of chemical reactions initiated by chlorine ions — which are especially abundant in the air near the sea — together with light1.

Keune and her team suggested that the ultimate product of this reaction was pure mercury, the liquid used in old-fashioned thermometers. Its accumulation in microscopic pores and crevices in the paint could be responsible for the blackening effect.

But their theory was hard to prove — metallic mercury is volatile, so determining whether it has formed in a given reaction is difficult, says Koen Janssens, a chemist at the University of Antwerp in Belgium, and a co-author of the latest study2. “It’s gone before you are able to analyse it,” he says.

To prove that the altered cinnabar was elemental, or ‘metallic’, mercury, lead author Karolien De Wael and her team placed the pigment on a platinum surface and dipped it in water that contained chloride ions. When the researchers cast laser light on the mineral, it turned black (see inset in picture below). By applying an electric voltage, the mercury ions were released from the pigment into the water. Moreover, the voltage required was precisely that required for metallic mercury to release ions, De Wael says. The results were published this week in Angewandte Chemie.

Keune says the team’s demonstration that the black material is metallic mercury is convincing, and will be “extremely valuable” for determining how to best store and exhibit works of art.

Janssens agrees that knowing the exact cause of vermilion’s blackening might help conservators to prevent it. Keeping paintings in the dark is not an option, but keeping chlorine from reaching the pigment should be possible, for instance by making sure that the protective layer of varnish does its job properly. 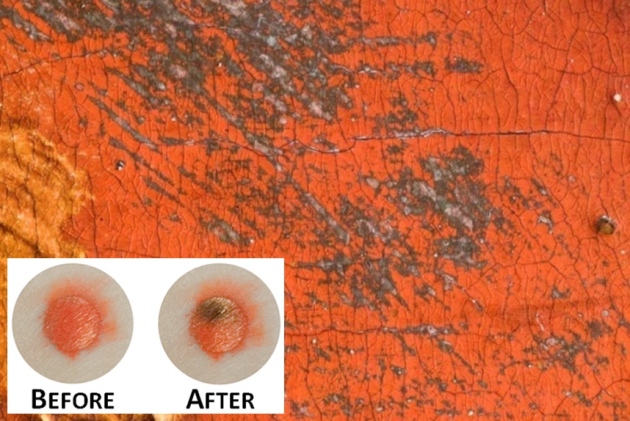 The alteration of vermilion in Adoration of the Magi is similar to the one researchers produced artificially in the lab (inset).