Following yesterday’s unexpected (if not shocking) news that ministers from Berlusconi’s PDL have resigned en masse in order to push for new elections, leading to the latest Italian government crisis (in a long and distinguished series), Italy’s premier Letta and president Napolitano are scrambling to preserve some stability, and not only they but moments ago Ansa reported that the management and supervisory boards of Italian megabank Intesa are set to meet at 6 pm, as not even the most optimistic see an easy way out of the political dead end Italy has found itself in now.

And while everyone’s attention will be drawn to the financial markets’ response, even as everyone knows another Italian – former Goldmanite and head of the Bank of Italy and current head of the ECB, Mario Draghi – has those under control (just think of all the “political capital“), the political situation is indeed very serious. So while the ECB will try to do “whatever it takes” to preserve stability, the math on the ground is far more problematic. According to a Corriere della Sera reports, citing its own calculations, PM Letta needs to find 24 votes to win a possible confidence vote in Senate next week, Letta can count on 137 senators without former premier Berlusconi’s party and its allies. He needs 161 votes to win in the 315-seat Senate as the upper house also has 6 senators for life. Should the confidence vote not pass, he will have no choice but to resign leading to the second Italian elections in seven months.

Which is why as Reuters further reports, Letta will meet the president on Sunday in a few minutes, at 6 pm local time, “to try to chart a way out of a deep political crisis after Silvio Berlusconi pulled his ministers out of the government and called for new elections.”

President Giorgio Napolitano said he would only dissolve parliament as a last resort but just seven months after the last vote it is not clear if an alternative majority can be found.

Berlusconi, the centre-right former prime minister who was forced out of office in November 2011 at the height of the euro zone debt crisis and faces a ban from parliament for tax fraud, has already launched his election campaign.

Infighting among the left-right coalition government has thwarted efforts to push through reforms Italy needs to emerge from a two-year recession, a 2-trillion-euro public debt and youth unemployment of around 40 percent.

The political paralysis resulting from the government’s collapse will delay those reforms even further in the euro zone’s third largest but most sluggish economy.

“It is tradition for the president to dissolve parliament early when it isn’t possible to create a majority and a government for the good of the country,” Napolitano told reporters ahead of his meeting with Letta. The prime minister will address parliament on the crisis early next week.

This being the political circus that is Italy, only very naive europhiles will be surprised that from a coalition member, Berlusconi promptly became the reason for the government collapse in just over half a year.

Berlusconi said he decided on the shock move on Saturday after the government’s failure to avert a long-programmed hike in sales tax at a cabinet meeting the day before. Letta dismissed the motivation as a “huge lie,” saying instead that the media tycoon, who celebrated his 77th birthday on Sunday, was acting out of fury at his impending expulsion from parliament following a conviction for tax fraud. With fears that markets will punish Italy for the political turmoil, all eyes now are on whether Napolitano can muster backing either for a second Letta government or for an administration led by another figure.

If not, Italy would be forced to return to the polls with a major risk that, with a dysfunctional electoral law and three parties of roughly equal size, they would produce a hung parliament and yet more instability. Berlusconi on Sunday called for new elections, but there were signs that some allies may not be willing to follow him.

“The only path to follow is to go with determination towards new elections,” Berlusconi told a party gathering in Naples in a telephone link-up. “I am convinced that a government of taxes is not in the interests of our country.”

Economy Minister Fabrizio Saccomanni played down the risk that Italy’s borrowing costs would shoot up when markets open on Monday, a danger highlighted by other cabinet members. “I think the uncertainty connected to the government’s instability has been largely already factored in during the last few weeks,” he told business daily Il Sole 24 Ore.

Somehow that does not explain why Italian banks are rushing in a panic to prevent a bond collapse at all costs. But at least they have experience: recall that it was Berlusconi’s intransigence once again that caused Italian bond yields to hit record highs in November 2011, when Draghi refused to buy Italian bonds until Berlusconi quits, which he did ultimately to prevent the collapse of Europe (even as he was contemplating Italy leaving the Eurozone). 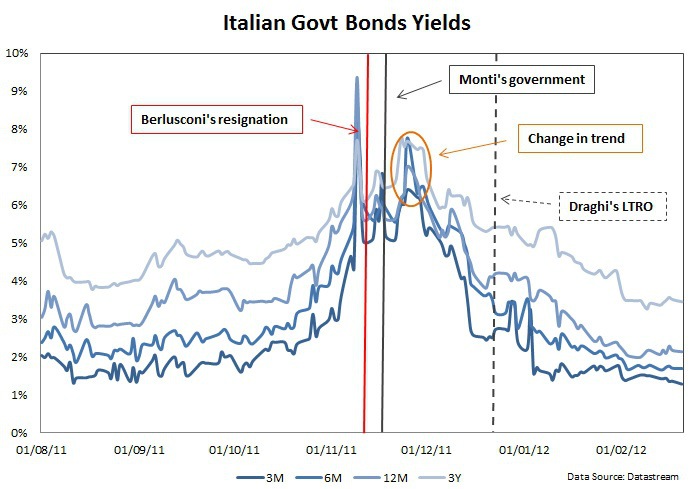 It is only fitting that Bunga Bunga has the final laugh.

As for the punchline:

“Markets have grown accustomed to Italy’s dysfunctional politics but there’s a sense that things are now spinning out of control, with potentially dangerous consequences for both Italy and the eurozone,” said Nicholas Spiro, head of Spiro Sovereign Strategy.

Of course, nobody could have possibly foreseen this happeneding in a world in which all critical structural political decisions are henceforth deferred to the local central bank, in hopes it will do all in its power to avoid domestic political dysfunction from tearing the system down.

So get to work Mr. Draghi, or else all that political capital invested in a “No Plan B” Europe may suddenly evaporate.