The number one reason blamed for childhood deaths in America used to be accidents; now it’s cancer.

ABC News is reporting today that cancer has officially outranked every other cause of childhood death in this country: 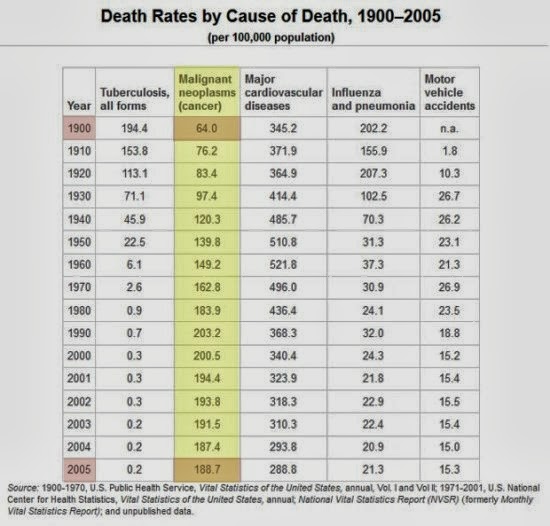 In fact, the chances of an American being diagnosed with some type of cancer in his or her lifetime is now one in two.

This dramatic increase over a relatively short span of time obviously suggests environmental factors are at play here. So why haven’t all these charitable “run for the cure” cancer drives — fundraisers that happen year after year after year as cancer rates only continue to grow — ever cured anything?

Winning the war on cancer means preventing cancer. Yet cancer is a multi-billion dollar business. Isn’t preventing cancer bad for business? It is for the pharmaceutical and mammography businesses. These industries have intricate ties to U. S. policy makers, directing research funds to ensure their continued profits in cancer diagnosis/treatment.

If prevention is key to crushing cancer, then finding out what is actually causing this cancer epidemic from independent studies not funded by the very companies that stand to profit off pointing fingers in the wrong direction is the first step.

What is causing all this cancer, especially the rise in children? Two big factors may be chemicals and electromagnetic radiation.

A whopping 70-90% of any average U.S. grocery store is filled with processed foods full of chemical additives and preservatives, many of which are genetically modified, in addition to the fact that a vast majority of U.S. food is tainted with pesticides.

The CPC discusses multiple studies that have come to the same conclusion: continual exposure to the multitude of carcinogenic pesticides in this country’s food supply is killing our kids:

The Bush [Sr.] Administration has flung open the floodgates to carcinogens in our food. With active support of the Secretary of Health and Human Services, the Environmental Protection Agency (EPA) has in effect revoked the 1958 Delaney law, which banned intentional contamination of food with any level of carcinogen.

Instead, the EPA now allows residues of any carcinogenic pesticide in any food at levels posing allegedly “acceptable” or “negligible risk,” as determined by manipulated numbers.

Should pesticide in our food really ever be considered “acceptable”?

Michael Taylor, former Monsanto Vice President for Public Policy and our current Food Safety Czar in this Twilight Zone we all live in, wrote “The De Minimis Interpretation of the Delaney Clause: Legal and Policy Rationale” advocating a change in the interpretation of the 1958 Delaney Clause back in 1988. On it’s face, Delaney literally stated that no carcinogenic agents could be added to processed foods. Taylor’s interpretation paved the way to altering Delaney to be interpreted so that small amounts of known carcinogens could be added to our food, all without regard to the cumulative negative health effects.

Taylor wrote this, by the way, while working at a law firm contracted by Monsanto.

Another potential factor is the continual bathing of our growing children’s brains and bodies in electromagnetic radiation (EMR). Estimates show that those of us living in modern-day America are experiencing 100,000,000 times more electromagnetic frequency (EMF) than our grandparents did simply by existing. Incidents of brain tumors have also been found to be higher in Western, developed nations. Everything from cell phones to cell towers going up everywhere to household appliances to computers…even cars emit EMF. Many of these technologies were never tested for potential harmful effects. Research has found EMF does have an adverse effect on tissues and cells, and this non-ionizing radiation has been classified as a carcinogen or potential carcinogen.

Armed with this information, recommendations have been suggested for limiting a child’s exposure to pressing cell phones up to their skulls via hands-free devices or even using speakerphone options. WI-FI exposure in the house can be limited by opting to hard wire computers to modems and unplugging computers and modems at night or when not in use.

In a pediatric nursing article “Cell Phones and Children: Follow the Precautionary Road” Suzanne Rosenberg wrote, “While the government has deemed RF radiation to be safe, there is no current significant research to make this claim.” Just like the abundance of chemicals in our food, there is a vested interest in keeping a lid on information regarding just how dangerous this continual radiation exposure could be.

Cancer rates have risen to epidemic levels if estimates now show one in two adults will get cancer sometime in their lifetime. With childhood cancer as the number one child killer, what kind of cancer odds will our children face in their future? Forget racing for the cure; we have to start focusing on the cause.

2 thoughts on “Cancer Officially Number One Cause of Childhood Death in U.S.”