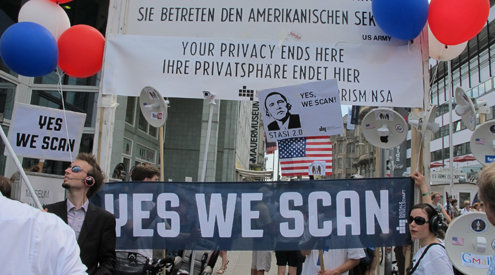 Protestors greeted President Obama when he visited in June. They are upset over the NSA spying.

BERLIN — Wolfgang Schmidt was seated in Berlin’s 1,200-foot-high TV tower, one of the few remaining landmarks left from the former East Germany. Peering out over the city that lived in fear when the communist party ruled it, he pondered the magnitude of domestic spying in the United States under the Obama administration. A smile spread across his face.

“You know, for us, this would have been a dream come true,” he said, recalling the days when he was a lieutenant colonel in the defunct communist country’s secret police, the Stasi.

In those days, his department was limited to tapping 40 phones at a time, he recalled. Decide to spy on a new victim and an old one had to be dropped, because of a lack of equipment. He finds breathtaking the idea that the U.S. government receives daily reports on the cellphone usage of millions of Americans and can monitor the Internet traffic of millions more.

“So much information, on so many people,” he said.

East Germany’s Stasi has long been considered the standard of police state surveillance during the Cold War years, a monitoring regime so vile and so intrusive that agents even noted when their subjects were overheard engaging in sexual intercourse. Against that backdrop, Germans have greeted with disappointment, verging on anger, the news that somewhere in a U.S. government databank are the records of where millions of people were when they made phone calls or what video content they streamed on their computers in the privacy of their homes.

Even Schmidt, 73, who headed one of the more infamous departments in the infamous Stasi, called himself appalled. The dark side to gathering such a broad, seemingly untargeted, amount of information is obvious, he said.

“It is the height of naivete to think that once collected this information won’t be used,” he said. “This is the nature of secret government organizations. The only way to protect the people’s privacy is not to allow the government to collect their information in the first place.”

U.S. officials have defended the government collection of information since word of it broke in newspaper stories based on documents leaked by former National Security Agency contractor Edward Snowden. The records are used only to track down terrorists overseas, officials say. The collection has been carefully vetted by the Foreign Intelligence Surveillance Court, a body of U.S. judges whose actions are largely kept secret. There is no misuse.

German Chancellor Angela Merkel, who grew up in East Germany, tried to provide an out for President Barack Obama, offering as a possible explanation for the sweeping nature of the U.S. collection efforts that “the Internet is new to all of us.” She was roundly mocked for that statement, and her administration appeared far less forgiving more recently, when similar spying charges were leveled against the British government.

Germans are dismayed at Obama’s role in allowing the collection of so much information. Before his presidency, hundreds of thousands of Germans turned out to hear him speak in Berlin. During a visit last week, the setup was engineered to avoid criticism: Obama spoke to a small, handpicked audience, many from the German-American school. Access to the Brandenburg Gate, the backdrop for his speech, was severely limited, as was access to Berlin’s entire downtown.

As many Germans as heard Obama speak turned out at quickly arranged protests, including one by self-proclaimed tech nerds near the historic Checkpoint Charlie, where U.S. soldiers welcomed visitors from the communist sector of Berlin for four decades with a sign, “You are entering the American sector.” One demonstrator added this coda: “Your privacy ends here.”

The center-left newspaper Sueddeutsche Zeitung took Obama to task over the surveillance issue. “Governments do not have the right to conceal broad lines of policy,” the newspaper wrote. “President Obama is operating according to an odd maxim: ‘I am doing a lot of the same things that George W. Bush did, but you can trust me because I am the one doing it.’ Not even Obama is deserving of that much trust.”

“Everyone knows that gathering so much information is bullshit,” said Reinhard Weisshuhn, a political activist and foreign policy adviser. “It’s a total breach of trust by the government. This is how a society destroys itself.”

For 15 years, the Stasi tracked Weisshuhn’s every move and conversation. His Stasi file, which he, like many other Stasi targets, reviewed after the Berlin Wall collapsed, ran to 9,000 pages. He was shocked, and he’s quick to stress that the United States shouldn’t be compared to the totalitarian East German state.

“But that doesn’t mean the president gets a free pass,” he said. “The United States is an open society. This is a problem that must be honestly addressed and fixed.”

Weisshuhn shares a common German perception on the scandal: Snowden, who’s been charged under the Espionage Act for leaking news of the domestic spying, isn’t the bad guy.

“In our case, we thought we were being paranoid until we saw what they’d gathered and realized we’d been naive,” Weisshuhn said. “Here, it’s not the whistle-blower who is wrong, it’s the gathering of information.”

Germans, especially those raised in the east, are unconvinced by arguments that the sweeping collection of information is used only to track terrorists. The assertions by U.S. officials that unspecified attacks have been thwarted don’t persuade them, either. They haven’t forgotten the fear of living under a government that used vague threats to justify blanket spying. In East Germany, the threats came under the banner of disloyalty to socialist ideals. In the United States, the monitoring programs come under the banner of anti-terrorism.

Dagmar Hovestaedt is the spokeswoman for the German Stasi Records Agency, which showed 88,000 people last year what the Stasi had gathered on them. She said the U.S. should consider doing the same.

“This is a study on how to deal with the information the NSA is now gathering,” she said of her archive. “To say that the NSA is the equivalent of the Stasi is too simplistic, but the people who are spied on do have a right to know what was learned about their lives, what they had hoped to keep private that was not. Transparency is essential.”

Still, she noted that Stasi victims have a large advantage in finding out what was studied.

“It’s easy to make information available when it was gathered by a state that no longer exists,” she said.

Stefan Wolle is the curator for Berlin’s East German Museum, which focuses in part on the actions of and reactions to the Stasi. What becomes clear when studying the information the organization gathered is the banality of evil: Simple pieces of everyday life are given much greater importance than they deserve when a secret organization makes the effort to gather the information.

“When the wall fell, I wanted to see what the Stasi had on me, on the world I knew,” he said. “A large part of what I found was nothing more than office gossip, the sort of thing people used to say around the water cooler about affairs and gripes, the sort of things that people today put in emails or texts to each other.

2 thoughts on “Former STASI Lieutenant Colonel On NSA Surveillance: “You Know, For Us, This Would Have Been A Dream Come True””