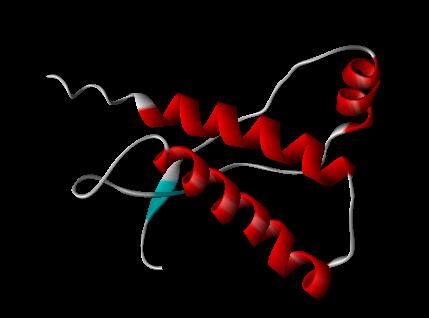 Alzheimer’s Disease Is a Prion Disease. A TSE, Transmissable (Transmittable) Spongiform Encephalopathy: Variants, Sub Variants of TSE Prions – Mad Cow Disease – BSE, Bovine Spongiform Encephalopathy, CJD, Creutzfeldt-Jakobs Disease, Kuru, Sheep and Goat Scrapie, Cat – FSE, Elk and Deer – CWD, Chronic Wasting Disease.  There are also ‘inherited’ genes that may cause a small portion of CJD, GSS and FFI.  But, as will be discussed briefly later in the article, may or may not be correct. http://users.rcn.com/jkimball.ma.ultranet/BiologyPages/P/Prions.html 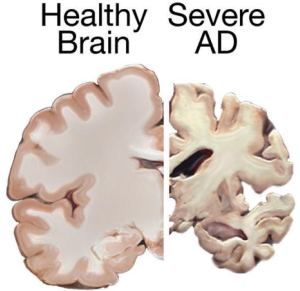 The age-adjusted death rate from Alzheimer’s disease increased by 39 percent from 2000 through 2010 in the United States.” There is a 400% increase expected by 2050. http://www.cdc.gov/nchs/data/databriefs/db116.htm

Non-infectious form of prion protein could cause brain degeneration. (Note: This is the outdated 2009 original quote. We know it Does cause brain degeneration.  Non-infectious since we don’t eat their brains, there is absolutely no reason these prions are any different than any other prions. If eaten they will go to work) … with the amyloid-â peptides that are hallmarks of Alzheimer’s disease. http://www.nature.com/news/2009/090225/full/news.2009.121.html

SCIENTISTS CONFIRM THAT ALZHEIMER’S IS A PRION DISEASE …. 25th Feb 2009 ALZHEIMER’S – PRION CAUSES AMYLOID PLAQUE BUILD UP http://www.sludgevictims.com/pathogens/ALZHEIMERS-CJD-samepriondisease.doc (An excellent, informative article to come back to if one is a ‘novice’ to prions.) To download an English .doc and PP reader from microsoft http://www.microsoft.com/en-us/download/details.aspx?id=4

Prions? WHAT? Prions are about the smallest and simplest a pathogen can get.  A virus is like a major corporation, with genomes, multiple RNAs (prion doesn’t even have RNA, at least officially. But, it performs 2 major RNA functions – replication and survival even better than RNA does), and a lot more.  Prions could only dream of that.  There are a couple of things about this simple, single protein, an instant assembly line of itself, that make it so devastating.

Prion: Here’s what Nobel Prize winner on the subject of Prions had to say on ‘Prions’ A little dated and technical, but worth the trip. He believes prions are big link to many neurodegenrative diseases, and rightly so, IMO based on the referenced facts.   http://cshperspectives.cshlp.org/content/3/1/a006833.full . A prion is to all species as smallpox was to Native Americans. The only difference is onset of death.

It turns out that prions are molecules of a normal body protein that have changed their three-dimensional configuration.

The normal protein is called PrPC (for cellular) is a transmembrane glycoprotein normally found at the surface of certain cells (e.g., neural and hematopoietic stem cells); has its secondary structure dominated by alpha helices (probably 3 of them); is easily soluble; is easily digested by proteases; is encoded by a gene designated (in humans) PRNP located on our chromosome 20.

The abnormal, disease-producing protein is called PrPSc (for scrapie); has the same amino acid sequence as the normal protein; that is, their primary structures are identical but; its secondary structure is dominated by beta conformation; is insoluble in all but the strongest solvents; is highly resistant to digestion by proteases; When PrPSc comes in contact with PrPC, it converts the PrPC into more of itself (even in the test tube). These molecules bind to each other forming aggregates. http://users.rcn.com/jkimball.ma.ultranet/BiologyPages/P/Prions.html

Association analyses confirm the dominance of PRNP as a risk factor relative to all other genes. Prion strains are known to determine key clinical features such as age of onset and …showed weak evidence of a modifying effect on age of onset of sCJD (as a quantitative trait) with the risk allele being associated with an earlier age of onset  Concerning common genetic variation, it is likely that the PRNP locus contains the only strong risk factors that act universally across human prion diseases. http://hmg.oxfordjournals.org/content/21/8/1897.full

Kiss of the Prion: Pucker Up for Parkinson’s, Alzheimer’s and more? Because: The last mode of transmission is of particular interest because it indicates that the consumption of meat and other products derived from animals experiencing prion disorders may pose a real risk to humans. Recent reports suggest that, in addition to meat, bodily fluids such as blood, saliva, feces, and milk may well be risk factors for possible transmission of TSEs to humans. Successful oral transmission among different animal species (interspecies) has been demonstrated. Association analyses confirm the dominance of PRNP as a risk factor relative to all other genes. http://jid.oxfordjournals.org/content/201/11/1615.full

As can be clearly seen, once a prion gets inside the body, its small, simple size allows it access to the entire body including the meat itself. Not noted in the quote are the concentrations (quantity X volume) vary between the different organs.

Killing it by cooking? Not going to happen unless you get above: New studies on the heat resistance of hamster-adapted scrapie agent: Threshold survival after ashing at 600°C suggests an inorganic template of replication.  http://www.ncbi.nlm.nih.gov/pmc/articles/PMC16254

” When it comes to infectious agents, it doesn’t get much worse than prions. These misfolded proteins are highly resistant to a wide variety of extreme disinfectant procedures. They have been identified as the culprits behind mad cow disease and chronic wasting disease in animals and humans, and are also implicated in Creutzfeldt-Jakob disease and other prion-related disorders.

But an interdisciplinary University of Alberta research team has come a step closer to finding a way of inactivating these highly infectious proteins. Ozone. How many corporate butchers are using ozone as a disinfectant?  Zero that I know.  How many are even concerned about cross contamination of meat with major concentrations of prions in the spine?  Once any portion of the spine or its major nerves releases all CNS fluids into and on the meat. http://phys.org/news/2012-02-prions-ozone.html#jCp

A known genetic factor for susceptibility to prion disease is the common single nucleotide polymorphism (SNP) at codon 129 in PRNP, the gene that encodes PrP in human beings. http://www.ncbi.nlm.nih.gov/pmc/articles/PMC2643048/

Hello.  With the introduction of cancer into the spectrum of prions another group of disease is seen. This is a significant variance from the semi-limited view of just CNS disease, to a cellular cancer link for prions. If there are two pathologic processes for prions in that vast a spectrum, there should be more. How many more paths of disease can prions activate?

Prions certainly appear to be a causative agent in at least two widely varied pathologic methodology.  As stated prior, Prions are very similar to RNA in the way they work.  Essentially the ‘workhorse’ of RNA strands? Are Prions one or the basic building blocks of many ‘unknown’ cause diseases?  Prions and Synuclein Proteins certainly seem a promising route of investigation for many diseases.

Prions are the only thing we know that leave these amyloid plaque Lewy body remnants.  Whether the origin be internal genome mutation or outside invasion, if given enough time and the right circumstances, they will leave their ‘evidence’ behind.    In the chart below, where they know of no particular pathogen, they somehow decided to show the path of alpha synucleid, which as far as we know are only caused by prions: 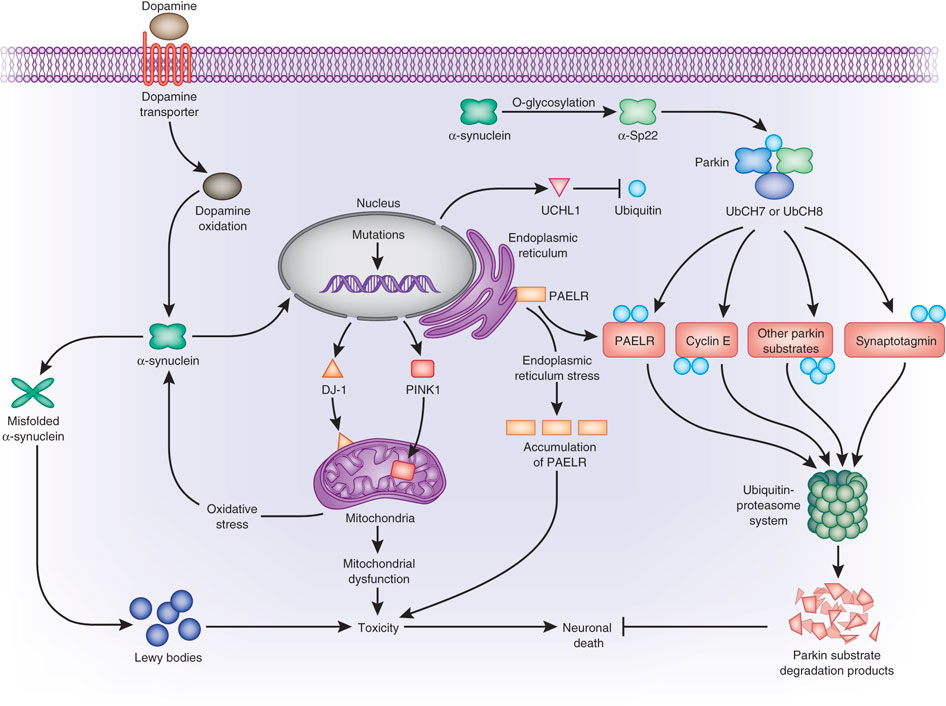 “There is a growing list of mutations linked to Parkinson’s disease. They account for 2–3% of the late-onset cases and ~50% of early-onset forms. Typical, late-onset Parkinson’s disease with Lewy body pathology is linked to mutations in three genes: SNCA (encoding α-synuclein), LRRK2 (encoding leucine-rich repeat kinase 2) and EIF4G1 (elongation initiation factor 4G1; M.F., unpublished data). Missense mutations in SNCA were first linked to familial parkinsonism with late onset, and subsequent SNCA duplications were found in kindreds in which age of onset, progression and associated comorbidities relate to gene dosage.”

“Mutations in and overexpression of α-synuclein seem to be especially toxic to dopaminergic neurons, as dopamine-synuclein adducts may inhibit chaperone-mediated autophagy. Even with the limited mechanistic insight currently available, reduction of α-synuclein expression may represent a potential therapeutic approach.”

“Recently, heterozygous mutations in GBA (encoding glucocerebroside and famously linked to Gaucher disease) have been associated with a typical phenotype of Parkinson’s disease and Lewy body pathology. It is now clear that this heterozygous loss-of-function mutation also leads to a >5-fold–increased risk of Parkinson’s disease in all populations as well as to earlier disease onset (typically in the early 50s).” http://www.nature.com/nm/journal/v16/n6/full/nm.2165.html

And now a little about familial inherited and genomes.  Chromosomal DNA genomes definitely play a place in the ‘expression’ of the prion diseases. Their role ranges from abnormal production of the normal protein to the making of an abnormal protein – ‘prion’, all the way to how long an invasive or auto-produced ‘prion’ incubates before killing its host. So are familial inherited caused by the genome, or merely more quickly ‘expressed’ by less resistance by the genome.

This protein goes everywhere.  Saliva, breast milk, feces, etc, a blood brain barrier, placental barrier, cellular barrier (membrane) are like 4 lane private interstates to prions. Once a prion enters a familial blood line how does one remove it. The diseased prion reproduces even if you don’t, and is surely carried by any prodigy. It’s a chicken and egg thing, IMO.

Radioactive fish is looking better and better… I’m done with any ‘mystery meat’.  And I definitely will not be having any Brains and Eggs, thank you very much.  But, for meat eaters ‘corporate butchery’ needs major health changes regarding the handling of ‘meat’ and handling of CNS ‘left over protein’.

History of Prions: http://learn.genetics.utah.edu/content/begin/dna/prions/ Worth the trip. Prions aren’t new. They’ve been around since the 1700′s.

*Try Startpage (Google results) search for the title of my June 2012 article: “Alzheimer’s Disease is a Prion Disease.”  Note how search engines are hiding information from the public. Deadly corporate government agents that need trials for crimes against humanity, IMO. I’m sure I have written and posted about prions, CWD, CJD, kuru, and Parkinson’s long before this hidden 2012.  I can’t seem to find them on the net, not surprised, but they are not where I usually post significant information.  So, the only thing I can figure is that it was in one or two of my ‘Daily DrEd’ information postings. Similar to this one day example in 2006 during its 3 month history. http://indymedia.us/en/2006/07/17878.shtml Th  Then try a search for – Alzheimer’s disease causes – to see the government’s and ‘Corporate Medicine’s list of useless, scam, deadly BS while avoiding prions.

A small aside from the disease itself.  Note how censorship and disinformation works.  Once you know what you are looking for, it’s easy to find.  But, if you don’t know the answer and are looking for it, it’s almost impossible to find.

US Government ‘Carrots’: The Eternal Path to Servitude http://edwardmd.wordpress.com/2013/06/10/us-government-carrots-the-eternal-path-to-servitude/

The US: “A Distorted, Bastardized, Illegitimate Government.” http://edwardmd.wordpress.com/2013/06/09/the-us-a-distorted-bastardized-illegitimate-government/

Pictures: US Boston Weapon – Both ‘Explosions’ – The Secret of the Pure Fusion Weapon – Li7 – Lithium 7 http://edwardmd.wordpress.com/2013/04/19/photograph-of-boston-fireball-2nd-explosion/

The US Wouldn’t Nuke Its Own People – Wake Up and Glow  http://edwardmd.wordpress.com/2013/04/13/the-us-wouldnt-nuke-its-own-people-wake-up-and-glow/

9 11 Fake Video Stars: The J Star Clones – Why Covert Operation’s Cointel Must Have ‘Fake’ Video and ‘No Planes’ http://edwardmd.wordpress.com/2013/05/05/9-11-fake-video-stars-the-j-star-clones-why-covert-operations-cointel-must-have-fake-video-and-no-planes/

FIXED VOTE = NO VOTE – I WILL NOT ASSIST ‘THIN AIR VOTE COUNTING’. http://edwardmd.wordpress.com/2009/10/23/fixed-vote-no-vote-i-will-not-assist-thin-air-vote-counting/

Dr. Ed Ward MD, AS, BS, MD – Reporting and investigating Constitutional abuses of the US government for almost 2 decades. AS, BS in Medical Technology – Minor in Organic Chemistry and Physics, volunteer during the Viet Nam war 6 years stateside active duty ‘med tech’ ‘US Air Farce’ – a decade experience in Medical Technology. MD degree from LSU, New Orleans – 2 decades in the field of General Practice. (My) Articles are also referenced by valid experts in their field. Dr Ed