Cyprus’ President Nicos Anastasiades has realized (as we warned), too late it seems for the thousands of domestic and foreign depositors who were sacrificed at the alter of monetary union, that the TROIKA’s terms are “too onerous.” Anastasiades has asked EU lenders to unwind the complex restructuring and partial merger of its two largest banks leaving EU officials “puzzled”, according to a letter the FT has uncovered, as “essentially, he is asking for a complete reversal of the program.” The EU officials claim that the failure to prepare for the bailout’s impact was partially the fault of Mr Anastasiades’ government, which voted down a first agreed rescue before succumbing to a similar deal nine days later.

The FT goes on to note that although the letter does not request it explicitly, Mr Anastasiades is in effect asking for further eurozone loans on top of the existing EUR10bn sovereign bailout – something specifically ruled out by a German-led group of countries at the time. The return of beggars-can-be-choosers we presume – or just token gestures to recover some populist support as the enemy of my enemy is my friend.

As we noted here (and on the chart below), it seemed pretty obvious where this was going to end – obvious that is to everyone except Europe’s victory-claiming politicians.

“Unless Cyprus implements some controls that truly work, at this pace its entire banking system will be completely deposit-free in under one year. And it will need to sell much more than all its gold to continue keeping the Troika happy and in compliance with all the future (because there will be many more) bailouts.”

In other words, anyone who has been paying attention to the facts on the ground, in this case represented by the record April collapse in deposits (during a capital-controlled month!), would be well aware of the inevitability of this happening; and that in a continent in which the link between the banking sector and the sovereign is stronger than an umbilical, it was only a matter of weeks or most months before Cyprus pulled an Oilver Twist once again. 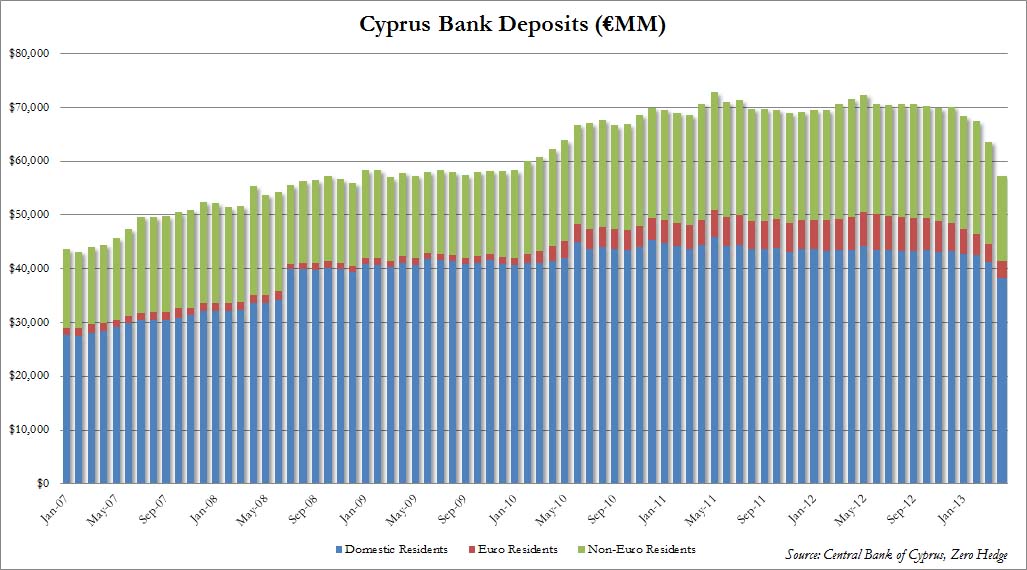 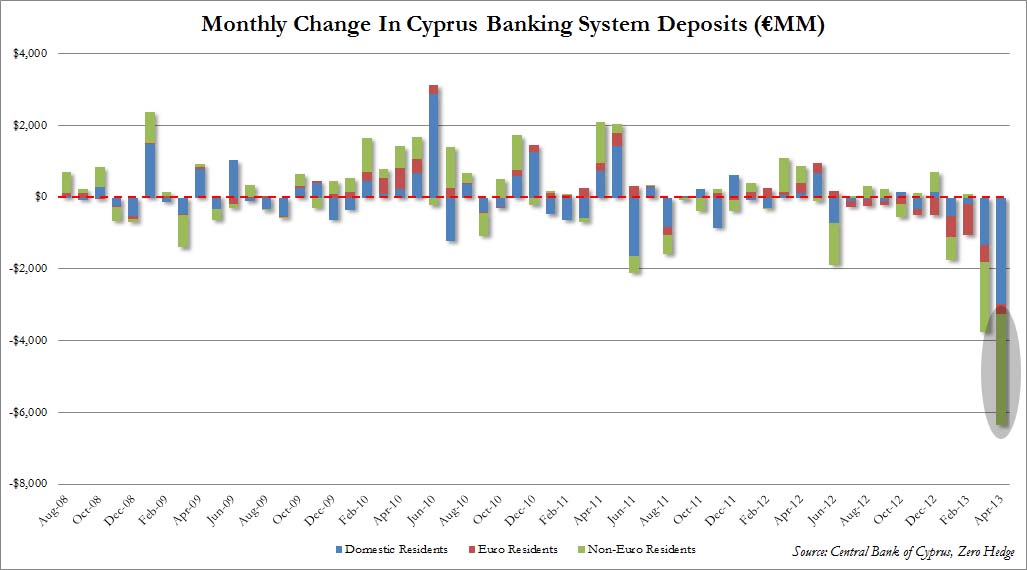 Cyprus’ president has asked eurozone leaders for a complete revamp of his country’s €10bn bailout, warning Nicosia may not be able to meet the rescue’s current terms because it has harmed the country’s economy and banking system even more than expected.

“[T]he economy is driven into a deep recession, leading to a further rise in unemployment and making fiscal consolidation all the more difficult,” Mr Anastasiades wrote to the heads of three EU institutions and the International Monetary Fund.

“I urge you to review the possibilities in order to determine a viable prospect for Cyprus and its people.”

“Essentially, he is asking for a complete reversal of the programme,” the official said, adding that the failure to prepare for the bailout’s impact was partially the fault of Mr Anastasiades’ government

Although the letter does not request it explicitly, Mr Anastasiades is in effect asking for further eurozone loans on top of the existing €10bn sovereign bailout – something specifically ruled out by a German-led group of countries at the time.

No explicit M.A.D. “we’ll leave the Euro” threats aside from the implicit view that this is not a viable path for his people.

Finally, when bailing out ungrateful European insolvent nations (who voted on the terms of the onerous bailout through their own government precisely two months ago), can Europe next time makre sure they get the memo to not make a ruckus before the critical reelection of Europe’s de facto viceroy, Angie Merkel?

Full Letter below (via Open Europe):

I am writing to update you on the economic and banking system developments in Cyprus following the Eurogroup decisions of last March and to request your support regarding a number of very pressing issues which need to be addressed the soonest.

1. The Cypriot economy is adapting to major shocks

The Cypriot economy is adapting to major shocks. Substantial private wealth has been lost and a significant number of Cypriot firms have lost their working capital at the two systemically important financial institutions which were subject to the bail – in. Restrictive measures, including capital controls, are seriously hampering the conduct of business and confidence in the banking system has been shaken. As a result the economy is driven into a deep recession, leading to a further rise in unemployment and making fiscal consolidation all the more difficult.

2. Application of bail-in was implemented without careful preparation

It is my humble submission that the bail-in was implemented without careful preparation. Its form was changed drastically within a week. Originally designed as a general bail-in across the banking system, it eventually became focused on the two distressed banks, the Laiki Bank and the Bank of Cyprus (BOC). There was no clear understanding of how a bail-in was to be implemented, legal issues are being raised and major delays in completing the process are being observed. Moreover, no distinction was made between long-term deposits earning high returns and money flowing through current accounts, such as firms’ working capital. This amounted to a significant loss of working capital for businesses. An alternative, Ionger-term, downsizing of the banking system away from publicity and without bank-runs was a credible alternative that would not have produced such a deep recession and loss of confidence in the banking system.

3. Cyprus was forced to pay the cost to ring-fence Greece but no reciprocity has been granted

Another feature of the current solution was that deposits at the branches of Laiki and Bank of Cyprus in Greece were spared from a haircut to prevent contagion. These deposits amounted to €15 billion. The wish to avoid contagion to Greece was also evident in the Eurogroup’s insistence that Cypriot banks sell their Greek branches. In addition and as a result of the sale, the Cypriot banks have lost their Greek deferred tax assets. As understandable as ring-fencing may be, this was absent at the time of deciding the Greek PSI in relation to the Greek Government Bonds which cost Cyprus 25% of its GDP (€4.5 billion). The heavy burden placed on Cyprus by the restructuring of Greek debt was not taken into consideration when it was Cyprus’ turn to seek help.

4. Imposition of Laiki’s ELA liability to Bank of Cyprus

The implementation of the sale of the Greek branches of the Cypriot banks, as urged by the Eurogroup, resulted in Laiki selling assets that were pledged against its ELA liability to Piraeus Bank, without Piraeus assuming the corresponding ELA liability. As such, Laiki was left with the related ELA liability but without the aforementioned assets. The ELA liability which was left “unsecured” as a result of the sale amounts to around €3.8 billion and was imposed on Bank of Cyprus as a result of the Eurogroup decision. It is worth reminding that a substantial part (in excess of €4 billion) of Laiki’s ELA liability was required in the first place in order to cover deposit outflows experienced by Laiki’s Greek branches.

Bank of Cyprus itself has a total ELA liability of around €2 billion. By taking an additional €9 billion from Laiki, which was accumulated over the course of the last year under very questionable circumstances, BOC has substantially increased the vulnerability of its own funding structure, with its cumulative ELA liability reaching a very high €11 billion. BOC was called to pledge its own assets to cover for the collateral shortfall for the €3.8 billion liability carried over by Laiki. Such a high amount of ELA liability hinders BOC’s funding sources as the room for obtaining additional ELA is limited. The imposition of Laiki’s ELA liability on Bank of Cyprus is the main contributor to the liquidity strain Bank of Cyprus faces.

5. Urgent need for Troika to provide a long-term sustainable and viable solution to the liquidity issues Bank of Cyprus is facing as a result of the Eurogroup decisions

Instead of addressing the issue of severe liquidity strain on Cyprus’ mega-systemic bank through a long-term sustainable and viable solution, the Troika partners seem to have chosen the path of maintaining strict capital restrictions. Artificial measures such as capital restrictions may seem to prevent a bank run in the short term but will only aggravate the depositors the longer they persist. Rather than creating confidence in the banking system they are eroding it by the day. Maintaining capital restrictions for a long period will inevitably have devastating effects on the local economy, will also affect the country’s international business and will have an adverse impact on GDP. Under such scenarios spill over effects will no doubt register on other local banks through higher non-performing loans as a result of dampened economic activity. In addition, increased deposit withdrawals from other local banks, as fear of lack of liquidity of the only systemic bank will have a domino effect on the entire banking system.

I stress the systemic importance of BOC, not only in terms of the banking system but also for the entire economy. The success of the programme approved by the Eurogroup and the Troika depends upon the emergence of a strong and viable BOC. It is for this reason that I urge you to support a long-term solution to Bank of Cyprus’ thin liquidity position. Such a solution will re-instate depositor confidence in the banking system and will allow the full functioning of the economy away from restrictive measures and capital controls. It will also facilitate the attraction of foreign direct investment in Cyprus.

My Finance Minister has alerted the Troika Mission Chiefs in writing on 19 May 2013, in relation to the need to implement a long-term viable solution to Bank of Cyprus’ liquidity position. No response has been received yet.

A possible long-term solution could be the conversion of part of Laiki’s ELA liability into long term bonds and the transfer of these bonds and corresponding assets into a separate vehicle. Another solution could be the reversal of the Eurogroup decision in relation to the merger of Good Laiki (carrying the €9 billion ELA liability) into Bank of Cyprus. In any case the BOC should exit resolution status without any further delays and should be granted eligible counter-party status by the ECB. Of course more options need to be examined. I should mention that an interim Board and an interim CEO is already in place at BOC and the final asset valuation is progressing according to schedule.

I urge you to review the possibilities in order to determine a viable prospect for Cyprus and its people. The new government of Cyprus, despite its expressed disagreements, has abided by the Eurozone decisions and remains determined to implement the programme fully and effectively. I am personally determined to lead Cyprus out of this dire situation and towards a path of sustainable growth and development. We are also fully committed to re-establishing Cyprus’s stance as a credible EU partner. However, at this crucial juncture, we are calling upon you for active and tangible support.