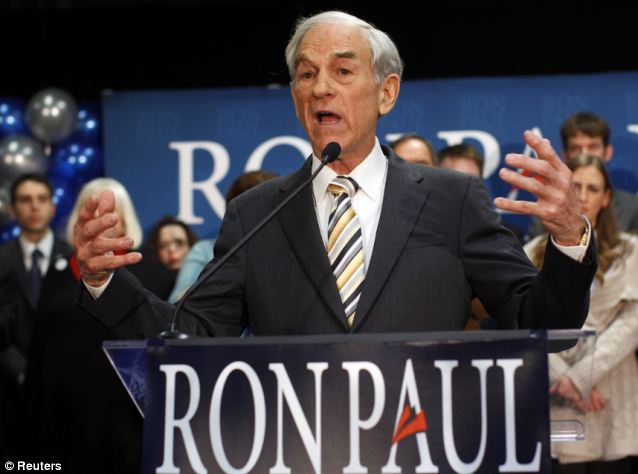 Ron Paul has been warning for a decade about the rise of the perfect security state, and now he sees his worst fears realized

– ﻿Ron Paul says Congress has been ‘derelict in giving so much power to this government’ as it’s revealed NSA whistleblower gave cash to his campaign (Daily Mail, June 10, 2013):

Former presidential candidate and retired long-time Texas Republican Congressman Ron Paul told MailOnline on Monday that if he had won the GOP nomination in 2012 and ultimately claimed the White House, the National Security Agency would no longer be in the dragnet business.

‘I would have said that we have to continue to have some surveillance,’ Paul said during an exclusive interview, ‘but only under the legitimate authority of the Constitution.’

He criticized the Obama administration and his former congressional colleagues for executing what he called an ‘end run’ around the Constitution, leveraging the controversial PATRIOT Act to do it, and then keeping the result secret from the American people.

‘We want them to ask why the terrorists want to hurt us, right?’ he began. ‘And then when they ask, they don’t like the answer they get. So they lie about it.’

‘And then we expect them to be truthful about how we can solve the problem while taking the Constitution seriously? Why are we surprised when the government hides the ball?’

Paul said that if he were president, he would not ‘ask for things in a FISA court,’ and would ‘only conduct searches when you have probable cause that there’s a crime.’

Asked about the NSA’s wholesale scraping of data from mobile phone providers and online companies like Google and Facebook, the former congressman spoke in absolutes, even when presented with an imaginary scenario in which National Security Adviser Tom Donilon briefed him on the PRISM project on the morning after his successful presidential election.

‘If I were president I would have declared that there would have been no probable cause.’ he declared. ‘So, no. It wouldn’t have happened.’

Paul said even the construction of the NSA’s mega-complex in Utah, where the agency is reportedly preparing the world’s largest data storage facility, would have come to a halt.

‘If it’s wrong, why continue to spend more money on something that’s wrong, and doesn’t solve our problem? I would have stopped it right away,’ he said.

The libertarian firebrand claimed he wasn’t surprised to learn how far the federal government has gone to surveil Americans with a public-safety justification.

‘This is the very sort of thing I’ve been talking about for years,’ he said, sounding more sad than angry.

He also found it unsurprising that Edward Snowden, the former NSA contractor who leaked information to The Guardian newspaper in London, contributed a total of $500 to his campaign in 2012. Reason magazine first reported those donations.

‘I would think anyone who’s interested in the government telling the truth would have been paying attention to what I was talking about’ on the campaign trail, he said. ‘But I’m not sure why it matters that he supported my campaign.’

‘Congress is derelict in giving that much power to the government,’ Paul said. ‘This is a natural consequence of growing government. The more power they have, the less they want to tell us about. And, you know, they had the legal authority to do this.’

Asked about Wisconsin Republican Rep. James Sensenbrenner’s insistence that the PATRIOT Act, which he drafted, doesn’t justify the NSA’s widespread general surveillance program, Paul scoffed.‘It’s not coming from a deeply principled viewpoint, but I’m glad he’s saying it. It adds credibility to our argument,’ he said.