If you know someone that actually believes that the U.S. economy is in good shape, just show them the statistics in this article.  When you step back and look at the long-term trends, it is undeniable what is happening to us.  We are in the midst of a horrifying economic decline that is the result of decades of very bad decisions.  30 years ago, the U.S. national debt was about one trillion dollars.  Today, it is almost 17 trillion dollars.  40 years ago, the total amount of debt in the United States was about 2 trillion dollars.  Today, it is more than 56 trillion dollars.  At the same time that we have been running up all of this debt, our economic infrastructure and our ability to produce wealth has been absolutely gutted.  Since 2001, the United States has lost more than 56,000 manufacturing facilities and millions of good jobs have been shipped overseas.  Our share of global GDP declined from 31.8 percent in 2001 to 21.6 percent in 2011.  The percentage of Americans that are self-employed is at a record low, and the percentage of Americans that are dependent on the government is at a record high.  The U.S. economy is a complete and total mess, and it is time that we faced the truth.

The following are 40 statistics about the fall of the U.S. economy that are almost too crazy to believe… 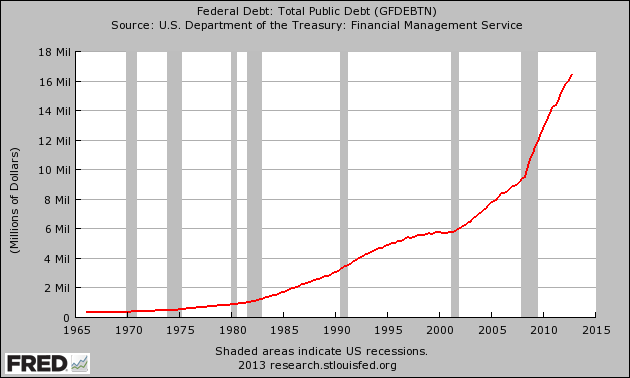 #2 During Obama’s first term, the federal government accumulated more debt than it did under the first 42 U.S presidents combined.

#3 The U.S. national debt is now more than 23 times larger than it was when Jimmy Carter became president.

#4 If you started paying off just the new debt that the U.S. has accumulated during the Obama administration at the rate of one dollar per second, it would take more than 184,000 years to pay it off.

#5 The federal government is stealing more than 100 million dollars from our children and our grandchildren every single hour of every single day.

#6 Back in 1970, the total amount of debt in the United States (government debt + business debt + consumer debt, etc.) was less than 2 trillion dollars.  Today it is over 56 trillion dollars… 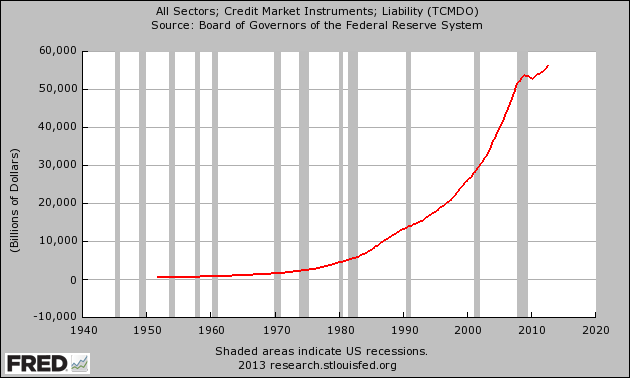 #8 The United States has fallen in the global economic competitiveness rankings compiled by the World Economic Forum for four years in a row.

#10 Incredibly, more than 56,000 manufacturing facilities in the United States have been permanently shut down since 2001.

#11 There are less Americans working in manufacturing today than there was in 1950 even though the population of the country has more than doubled since then.

#12 According to the New York Times, there are now approximately 70,000 abandoned buildings in Detroit.

#15 Overall, the United States has run a trade deficit of more than 8 trillion dollars with the rest of the world since 1975.

#16 According to the Economic Policy Institute, the United States is losing half a million jobs to China every single year.

#19 Small business is rapidly dying in America.  At this point, only about 7 percent of all non-farm workers in the United States are self-employed.  That is an all-time record low.

#21 In the United States today, the wealthiest one percent of all Americans have a greater net worth than the bottom 90 percent combined.

#22 According to Forbes, the 400 wealthiest Americans have more wealth than the bottom 150 million Americans combined.

#23 The six heirs of Wal-Mart founder Sam Walton have as much wealth as the bottom one-third of all Americans combined.

#24 According to the U.S. Census Bureau, more than 146 million Americans are either “poor” or “low income”.

#26 Overall, the federal government runs nearly 80 different “means-tested welfare programs”, and at this point more than 100 million Americans are enrolled in at least one of them.

#29 At this point, Medicare is facing unfunded liabilities of more than 38 trillion dollars over the next 75 years.  That comes to approximately $328,404 for every single household in the United States.

#30 Right now, there are approximately 56 million Americans collecting Social Security benefits.  By 2035, that number is projected to soar to an astounding 91 million.

#31 Overall, the Social Security system is facing a 134 trillion dollar shortfall over the next 75 years.

#33 According to a report recently issued by the Pew Research Center, on average Americans over the age of 65 have 47 times as much wealth as Americans under the age of 35.

#34 U.S. families that have a head of household that is under the age of 30 have a poverty rate of 37 percent.

#35 As I mentioned recently, the homeownership rate in America is now at its lowest level in nearly 18 years.

#36 There are now 20.2 million Americans that spend more than half of their incomes on housing.  That represents a 46 percent increase from 2001.

#38 Today, more than a million public school students in the United States are homeless.  This is the first time that has ever happened in our history.

2 thoughts on “40 Statistics About The Fall Of The U.S. Economy That Are Almost Too Crazy To Believe”