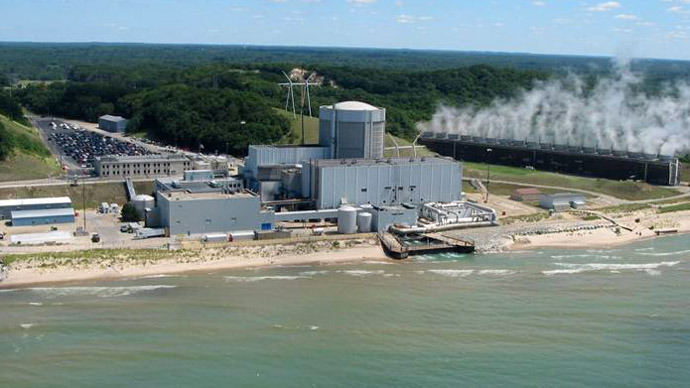 Investigators have discovered a half-inch long crack around a nozzle on one of the tanks of the Palisades Nuclear Power Plant, and have attributed the crack to the water leakage that spilled radioactive water into Lake Michigan on May 5.

The plant, which is located on the shore of the great lake and operated by Entergy, was shut down after the water tank exceeded its site threshold and leaked. Authorities say the crack led to about 79 gallons of “slightly radioactive water” spilling from the Palisades plant into the lake, WOOD-TV reports.

The leak came from a 300,000-gallon injection and refueling tank, which floods and cools the nuclear reactor with borated water during refueling outages. It also removes heat from the reactor when there is a loss of coolant by sourcing the safety injection system.

This month’s incident marks the second time the injection and refueling tank leaked, and caused the ninth shutdown of the plant since September 2011. Since 2012, the plant shut down six times as a result of leaks.

It took operators about a week and a half to find the source of the leak. But even though authorities acknowledged that the leaking water was radioactive, the Nuclear Regulatory Commission claims that this poses no risk to the local community, since it is was diluted.

“The NRC’s radiation dose limits are based on scientific studies and have not been shown to cause harmful health effects,” NRC spokeswoman Viktoria Mitlyng told MLive. “The NRC regularly reviews new information to make sure the agency’s limits are optimal for protecting public health. But this was an unplanned release that should not have happened.”

The NRC says the assessed dose to the public was 0.002 percent of the federal limit. The maximum dose to the public is limited to 0.1 rem per year. But because the Palisades plant has been shut down nine times since September 2011 and has frequently leaked in the past, Americans have expressed deep concern over the lack of safety that repeatedly causes problems in the lakeside Covert Township, Mich.

David Lochbaum, director of the Union of Concerned Scientists’ nuclear safety project, told MLive that it is unacceptable for the plant to suffer repeated leaks, and that Entergy should repair it properly rather than continuously patching up leaks. The NRC mandates plant owners to find and fix all safety hazards.

Congressman Fred Upton, the chair of the House Committee on Energy and Commerce,on Mondaytook a tour of the plant and announced that it will remain shut down until officials are sure it is safe to re-start. He said 10 of the tank’s nozzles are currently being upgraded and he will return to re-examine the plant before it is restarted.