– How Japan’s “Stealth Constitution” Destroys Civil Rights and Sets the Stage for Dictatorship (Liberty Blitzkrieg, May 2, 2013):

If there was ever a clear sign that the leadership of Japan is fully aware that the country is about enter a terminal economic catastrophe this is it. Using the cover of currency devaluation and a rising stock market, Japan’s Prime Minister, Shinzo Abe, is attempting to make it easier to change the country’s constitution so that they can eliminate freedom of speech and set the stage for a military dictatorship.

The draft deletes a guarantee of basic human rights and prescribes duties, such as submission to an undefined “public interest and public order.” The military would be empowered to maintain that “public order.”

This article will blow your mind.  Some key excerpts:

(Reuters) – Shinzo Abe makes no secret of wanting to revise Japan’s constitution, which was drafted by the United States after World War Two, to formalize the country’s right to have a military – but critics say his plans go deeper and could return Japan to its socially conservative, authoritarian past.

Abe, 58, returned to office in December for a second term as prime minister and is enjoying sky-high support on the back of his “Abenomics” recipe for reviving the economy through hyper-easy monetary policy, big spending and structural reform.

However, sweeping changes proposed by Abe’s Liberal Democratic Party (LDP) in a draft constitution would strike at the heart of the charter with an assault on basic civil rights that could muzzle the media, undermine gender equality and generally open the door to an authoritarian state, activists and scholars say.

Abe’s grandfather Nobusuke Kishi was a pre-World War Two cabinet minister who was arrested but never tried as a war criminal. Kishi served as premier from 1957-60, when he resigned due to a furor over a U.S.-Japan Security Treaty.

If you’re like me, you may have to read the above paragraph twice.  Absolutely incredible.

“The real concern is that a couple of years later, we move to a redefinition of a ‘new Japan’ as an authoritarian, nationalist order,” said Yale University law professor Bruce Ackerman.

You can guarantee that will happen as soon as that country enters its final economic death spiral.

“The current constitution … provides protection for a long list of fundamental rights – freedom of expression, freedom of religion,” said Meiji University professor Lawrence Repeta. “It’s clear the leaders of the LDP and certain other politicians in Japan … are passionately against a system that protects individual rights to that degree.”

The draft deletes a guarantee of basic human rights and prescribes duties, such as submission to an undefined “public interest and public order”. The military would be empowered to maintain that “public order.”

Can they be any more clear about what they are trying to achieve?

One proposal would ban anyone from “improperly” acquiring or using information about individuals – a clause experts say could limit freedom of speech.

Under Article 96, changes to the constitution must be approved by at least two-thirds of both houses of parliament and then a majority of voters in a national referendum. Abe wants to require a simple majority of lawmakers before a public vote.

With Abe’s popularity high and the main opposition splintered, the LDP and smaller pro-revision parties appear to have a shot at winning a two-thirds majority in an upper house election in July. They already hold two-thirds of the lower house.

Let’s see, print money, make the stock market go up and keep people servile as you destroy the country and rip up the Constitution.  Sound familiar?

Figure this might be a good time to remember the following real ad encouraging people to buy Japanese Government Bonds. 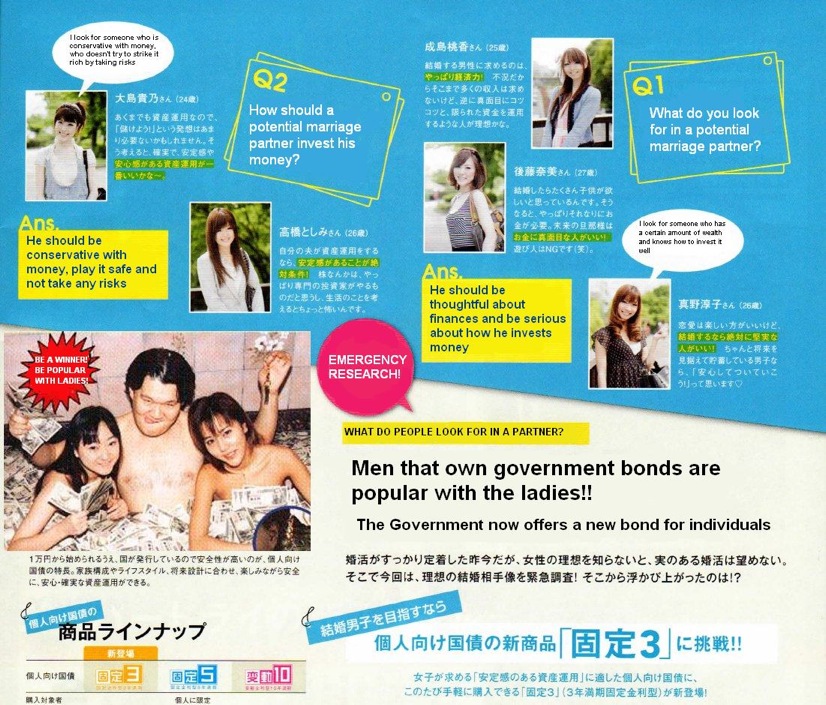