More than six months since the Japanese nationalistic escalation over the disputed island chain (that shall not be named) in the East China Sea sent Sino-Japanese foreign relations to a level not seen since a particular territorial dispute over Manchuria, tensions just hit a fever pitch overnight, when an armada of eight Chinese ships entered what Japan claimed were its territorial waters. 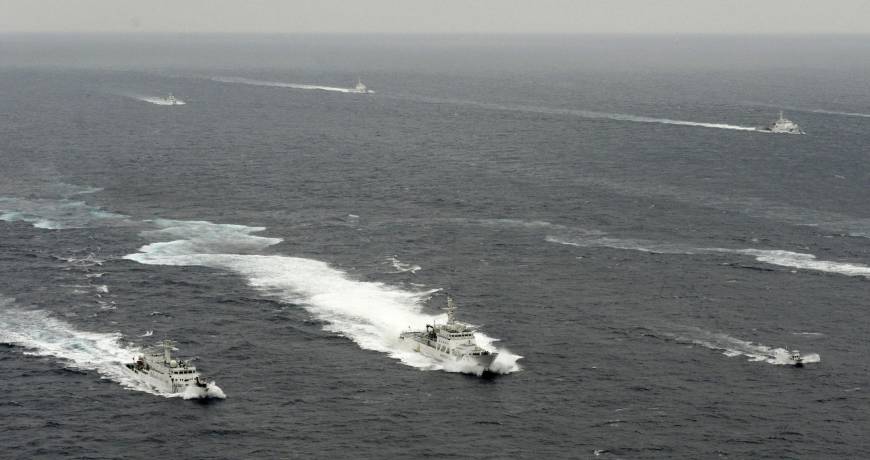 China’s version of the story is that the vessels were there to monitor the activity of a flotilla of boats reportedly carrying members of a Japanese nationalist group (in what it too, naturally, views as its territorial waters). This was the most Chinese ships to enter Japanese waters near the Senkakus since the Japanese government purchased three of them from what it considers their owner last September and effectively nationalized the chain, a move China has quite vocally disputed and which has led to violent anti-Japanese demonstrations in China, as well as a wide-ranging boycott of numerous Japanese exports.

Japan promptly followed protocol and summoned the Chinese ambassador and lodged a protest over the maritime activity.

“It is extremely regrettable and unacceptable that Chinese state ships continue to engage in intrusion,” Chief Cabinet Secretary Yoshihide Suga told a news conference. “We are protesting strictly through our diplomatic channels.”

The intrusion came after around 10 fishing boats carrying members of a conservative political group called Ganbare Nippon left Ishigaki Island in Okinawa and headed toward the Senkakus on Monday night. Things just escalated from there when running in four formations, the eight Chinese ships monitored the Japanese ships from different angles, China said in a statement.

Prime Minister Shinzo Abe vowed to “expel by force” any Chinese landing on the islets.

“We would take decisive action against any attempt to enter territorial waters and to land,” Abe told the Diet in response to questions from lawmakers. “We would never allow” a landing.

“It would be natural for us to expel by force (the Chinese) if they were to make a landing,” he said.

Obviously, when we first read this latest incarnation of tiny David provoking a massive Goliath, we couldn’t help but smile. Yet it turns out that Japan is indeed hell bent on pushing China to the limit, and then some, in this parading around with its best friend: the United States.

Moments ago Kyodo reported that Japan’s Defense Ministry said on Tuesday that “about 1,000 officers of the nation’s Self-Defense Forces will participate in a U.S. drill to be held in California in June involving recapturing control of an isolated island.”

Did we mention the drill would be held in California?

It is quite clear what said “recaptured island” is supposed to represent. It is even clearer what the US backing and sponsorship of such a drill on US soil is supposed to telegraph to China, so we won’t go into any details.

It will be the first time for SDF personnel to participate in such a drill on the U.S. mainland.

Japan’s participation could trigger a backlash from China as the Defense Ministry has been strengthening its capability to protect isolated islands amid soured ties with China over territorial issues surrounding the Senkaku Islands in the East China Sea, experts on defense issues said.

Actually China does not need to to twitch even the smallest military muscle: all it has to do is engage in a perfectly peaceful trade blockade of Japan: halt all exports to the tiny (by comparison) and irradiated nation, while boycotting all imports from Tokyo, which in better days amounted to 20% of all external trade. By doing so, China assures two things: the imminent collapse of Abenomics as even a 1,000,000 Nikkei225 will do nothing at all to prevent the country from entering an energy shortage shock, even as the local manufacturing sector implodes under its own weight, losing a core export market, and be forced to dump products on local soil in the process unleashing hyperdeflation.

In other words, if China wants, it can terminate Abe’s career in months. And since the entire fate of the “developed world’s” banking system is now in the hands of the BOJ and the successful conclusion of its reflation experiment, China just may just have been given the perfect opportunity to take down the (G-)7 birds with one stone.

The only question is whether Beijing feels it is ready and is willing to now finally truly challenge the Western reserve currency hegemony. Or wait some more.

Either way, it is only a matter of time now.

* * *
And now, we leave you with Abenomics and… girls in miniskirts.

1 thought on “1,000 Japanese Officers To Participate In ‘Island Recapture’ Drill In California”