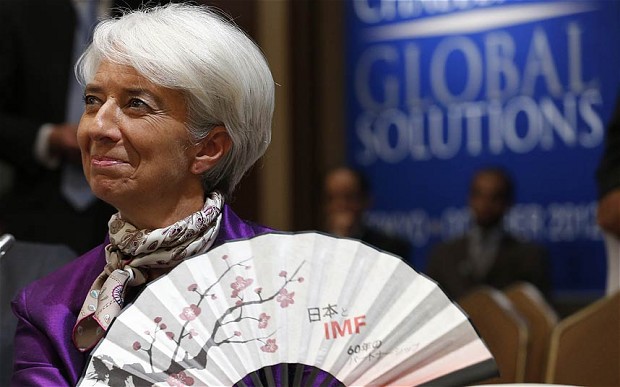 In a follow-up to investigations over alleged wrongdoing surrounding a EUR285mm payout by the then French finance minister and now IMF head, The Telegraph reports, Christine Lagarde’s Paris flat has been raided. The fresh (if you’re an orange) faced IMF Chief, of course, denies any wrongdoing in the case of a huge 2008 compensation payment to businessman supporter of ex-President Sarkozy. On the bright side, at least there were no indiscretions in hotel rooms involved (yet it seems she is following in the strong footsteps of her predecessor DSK – how can we not trust these people?)
Via RT,

The Court of Justice of the Republic ordered a probe into the case under the suspicion that Lagarde had committed an abuse of power by releasing the funds to Tapie. The then socialist opposition alleged that Nicolas Sarkozy’s government was rewarding the businessman Tapie for his support during the 2007 elections.

French authorities have searched the Paris flat of IMF chief Christine Lagarde as part of an investigation into her handling of a 2008 compensation payment to a businessman supporter of ex-president Nicolas Sarkozy, her lawyer said.

“This search will help uncover the truth, which will contribute to exonerating my client from any criminal wrongdoing,” Lagarde’s lawyer, Yves Repiquet, told Reuters.

It was conducted a day after France’s budget minister resigned after being targeted in a tax fraud inquiry.

Socialist President Francois Hollande came to power last May vowing to crack down on the cozy relationships between politicians and businessmen he said were rife under Sarkozy.

Lagarde was in Frankfurt and not in her Paris flat at the time of the search, a spokesman for the IMF chief said.