These days one has to laugh with the Japanese, as the temptation to laugh at them is just so high.

Because, sadly, the endless barrage of negative developments surrounding the “Land of the Rising Sun” may soon require a constitutional amendment replacing that key adjective to “Setting.” And while everyone knows that Japan’s economy is the Keynesian voodoo religion’s event horizon laughing stock, caught between a 30 year deflationary implosion which is the only permissive factor allowing it to sustain interest payments on a 235% debt/GDP mountain, and a banking, debt and funding crisis should the government “succeed” in generating inflation, it is the intangibles that will be the proverbial straw that breaks this particular camel’s back. Intangibles, such as 2011’s tsunami and Fukushima explosion, which have made sure that every piece of domestic sushi will be pre self-cooked for generations.

Yet glowing in the dark may have just been the beginning: now Japan also has a toxic, photochemical smog problem to boot. 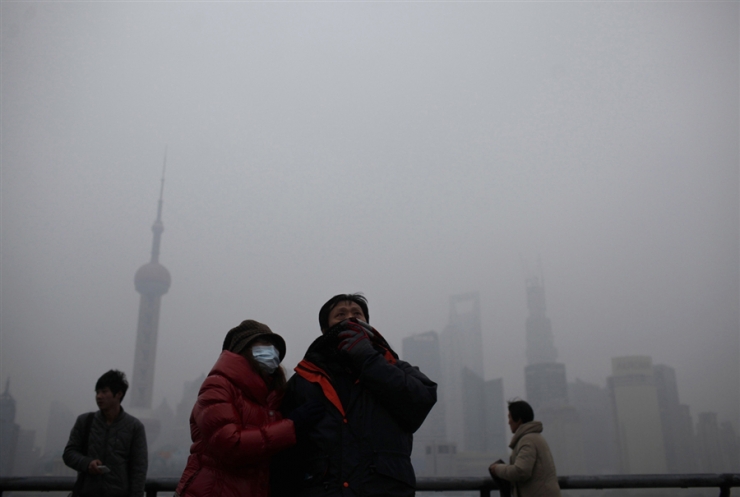 It is true that we were confused why China had not retaliated too aggressively in the ongoing spat over some meaningless islands in the China Sea. At least not yet. It turns out that China was merely biding its time in deciding on how to most Geneva Unconventionally punish its militant island neighbor to the east. Turns out that the punishment will come in the form of an export that Japan will hardly be happy with: the unprecedented smog that until recently was blanketing China. The same toxic smog is now over Japan.

The suffocating smog that blanketed swathes of China is now hitting parts of Japan, sparking warnings Monday of health risks for the young and the sick.

The environment ministry’s website has been overloaded as worried users log on to try to find out what is coming their way.

“Access to our air-pollution monitoring system has been almost impossible since last week, and the telephone here has been constantly ringing because worried people keep asking us about the impact on health,” said an environment ministry official.

Pictures of Beijing and other Chinese cities shrouded in thick, choking smog played out across television screens in Japan last week.

News programs have broadcast maps showing a swirl of pollution gathering strength across China and then spreading out over the ocean towards Japan.

Pinks, reds and oranges that denote the highest concentrations form a finger of smog that inches upward to the southern main island of Kyushu.

So on one hand Tokyo has radioactive sea breezes to watch out for from the East, and on the other: carcinogenic particulate matter as a result of China building empty cities to keep its 8% GDP on target. As we said before: laugh with them, not at.

Air pollution over the west of Japan has exceeded government limits over the last few days, with tiny particulate matter a problem, said Atsushi Shimizu of the National Institute for Environmental Studies (NIES).

Prevailing winds from the west bring airborne particles from the Asian mainland, he said.

Of specific concern is the concentration of a particle 2.5 micrometers or less in diameter, which has been as high as 50 micrograms per cubic meter of air over recent days in northern Kyushu.

The government safe limit is 35 micrograms.

Yellow sand from the deserts of Mongolia and China is a known source for these particles, as are exhausts from cars and smoke from factories.

“At this time of year they are definitely not yellow sands, so they’re toxic particles,” Shimizu said, warning that “people with respiratory diseases should be careful.”

Fear not: the Japanese government will simply raise the safe limit to 100 micrograms, as it did in the aftermath of the Fukushima explosion when it was lying non-stop just how safe Fukushima is, confirming that when it comes to treating its citizens it is no better than the USSR circa 1986.

But the bigger problem for Japan is that when Abe set off on his campaign to crush the currency, this is not the kind of bilateral, well really unilateral as China is still not importing anything from Japan, he had in mind. In fact, in the absence of domestic nuclear power plants, the cost of imported Japanese energy will soar, even as the local purchasing power implodes, leading to civil unrest and a prompt sweep of the government.

Unless, of course, this is merely a very elaborate scheme to finally “fix” the old age overpopulation problem Japan is facing, in which the toxic pollution will merely finish what Fukushima couldn’t. After all it was none other than Japan’s deputy PM who urged Japan’s elderly to “hurry up and die.”

Since they sternly refuse to do so, has the time finally come to give them a hand?