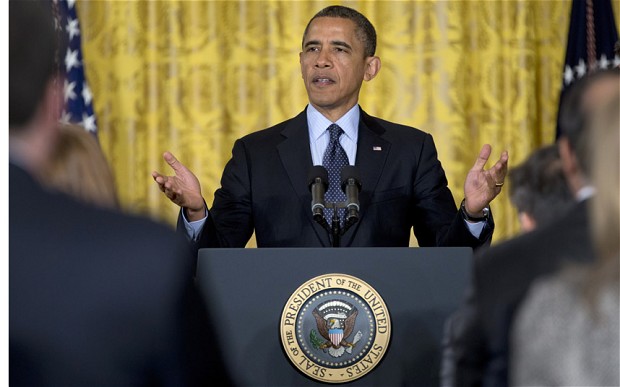 Amid conservative anger over Mr Obama’s proposals to ban assault weapons as part of a drastic overhaul of US gun control laws, the president said that he was a keen clay-pigeon shooter.

Asked in a magazine interview whether he had ever fired a gun, Mr Obama said he did so with guests at the president’s rural retreat.

“Up at Camp David, we do skeet shooting all the time,” he said. “And I have a profound respect for the traditions of hunting that trace back in this country for generations.

“And I think those who dismiss that out of hand make a big mistake”.

Mr Obama’s plans for tighter firearms regulations were drawn up by Joe Biden, his vice-president, following the massacre of 26 people, including 20 young pupils at a primary school in Connecticut last month.

Mr Biden – whose proposals also include a background check system on all Americans trying to buy guns and a 10-shot limit for ammunition clips – has been quick to note that he owns a shotgun.

The president, however, rarely speaks personally about firearms, and is dismissed by many enthusiasts as an elite urban law professor who does not appreciate America’s heritage of gun ownership.

He accepted in his interview that gun culture in rural areas was “very different” to that in urban areas, such as his home town of Chicago, where it is more frequently linked to serious crime.

“If you grew up and your dad gave you a hunting rifle when you were 10, and you went out and spent the day with him and your uncles, and that became part of your family’s traditions, you can see why you’d be pretty protective of that,” Mr Obama told The New Republic.

He made clear, however, that his daughters Sasha, 11, and Malia, 14, did not join the clay-pigeon shooting parties at Camp David, in rural Maryland.

A week before the Super Bowl, the most keenly-awaited event in the US sporting calendar, the president risked further angering the heartland by expressing concern about the safety of American football.

Several high-profile professional players have in recent years developed brain damage, which has been linked to the frequent heavy impacts on their skulls caused by the sport.

“I’m a big football fan, but I have to tell you if I had a son, I’d have to think long and hard before I let him play football,” said Mr Obama.