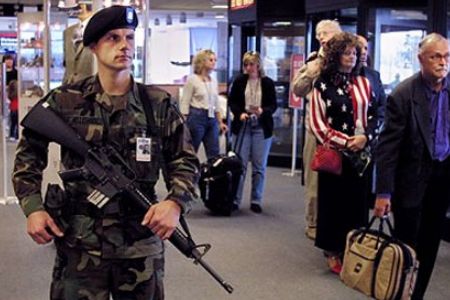 – Homeland Security training TSA workers to save themselves in shooting (PressTV, Jan 27, 2013):

Transportation Security Administration (TSA) checkpoint screeners are receiving training to prepare them for the possibility of a mass shooting at one of the agency’s airport checkpoints, and those TSA personnel are being instructed to “save themselves” should a shooting occur.

It is unclear whether the TSA is conducting the reported mass shooting scenario training at airports around the nation or only at the airport where our source, a veteran of the TSA, is assigned. The TSA source claims with obvious concern that his own life, along with the lives of other unarmed TSA personnel, would be in grave danger were an airport checkpoint shooting to unfold.

The TSA screener, who claims to have recently undergone agency training during which TSA personnel were confronted with a chilling checkpoint shooting scenario, now tries to remain aware of how to get out alive were such a shooting to unfold.

“Every day when I arrive for work, I look for an escape route in case someone opens fire”, said the TSA worker. “We have been told to save ourselves”.

Does the TSA already have intelligence about a possible future checkpoint shooting?

It is unclear whether the alleged training is simply a prudent attempt by the agency to protect its own employees from every imaginable contingency. Fears are that the Department of Homeland Security has detected a threat and is already moving to prepare staff to either handle it or get out of the way. The Washington Times

A recent Government Accountability Office (GAO) report shows the severity of TSA’s faults on the American public. More travelers are choosing to drive or take a train to their destination, in part to avoid the security mess that the TSA is in charge of. RT

The agency has suffered continuous criticism, with passengers accusing employees of stealing their belongings, groping them inappropriately during security screenings, and detaining them without valid reason. RT

Some of the abuses of the TSA chronicled include manhandling children, the elderly, severely ill and disabled passengers; testing drinks that travelers purchased inside airports and ordering travelers to freeze on command. examiner.com

Angry passengers undergoing screenings at Ronald Reagan National Airport in Washington DC are never given forms they can turn in documenting their complaints. They are simply provided with small pieces of paper containing the TSA website and mailing address. The Washington Times