– Trader Who Made Billions For Deutsche Manipulating Libor, Has $53 Million In Bonus Clawed Back (ZeroHedge, Jan 25, 2013):

The name Christian Bittar is well-known to regular Zero Hedge readers. Recall from “Deep Into The Lieborgate Rabbit Hole: The Swiss Hedge Fund Link?”: ” just like in the case of Barclays (with Diamond), JPM (with Bruno Iksil), UBS (with Kweku) and Goldman (with Fabrice Tourre), there always is a scapegoat. Today we find just who that scapegoat is. From Bloomberg: “Regulators are investigating the possible roles of Michael Zrihen at Credit Agricole, Didier Sander at HSBC and Christian Bittar at Deutsche Bank, the person said on condition of anonymity because the investigation is ongoing.” We proceeded to do a circuitous analysis to find that despite assumptions to the contrary, not only has Mr. Bittar not been expelled from the industry for manipulating Libor, but he is still collecting fat paychecks at Swiss hedge fund BlueCrest, Europe’s third largest, with some $30 billion under management. Today, courtesy of Bloomberg we get the details of how Mr. Bittar departed Deutsche, and just what his responsibilities there were.

First, there were those who said manipulating Libor was at best a mere trifle, generating scrap in terms of profits. Wrong.

Bittar, who joined Deutsche Bank in 2001, was a proprietary trader specializing in short-term derivatives contracts and entitled to a percentage of the profit from his trades, the people said. He took billion-euro positions on the direction of short-term interest rates with the firm’s own money and reaped hundreds of millions of euros in profit for the bank, the people said. The bonuses Deutsche Bank pays its staff typically vest over a three-year period.

Why was Bittar let go?

The lender dismissed Bittar in December 2011, claiming he colluded with a Barclays Plc (BARC) trader to manipulate rates and boost the value of his trades in 2006 and 2007, said the people, who requested anonymity because they weren’t authorized to speak publicly. His attempts to rig the euro interbank offered rate and similar efforts by derivatives trader Guillaume Adolph over yen Libor are the focus of the bank’s probe, the people said. Both traders declined to comment for this story.

Adolph, who is Adolph?

Adolph was dismissed in December 2011 for inappropriate communications with UBS AG’s Thomas Hayes, the people said. Adolph settled out of court with Deutsche Bank after the firm tried to withhold some of his stock awards that had already vested, according to two people with knowledge of the case.

Adolph was responsible for inputting the firm’s submissions to the yen benchmark and trading derivatives whose values depended on it, the people said. U.S. prosecutors charged Hayes with wire fraud and price-fixing in December. His lawyers at Fulcrum Chambers declined to comment.

How were Adolph and Hayes manipulating Libor?

The Justice Department, in its December settlement with Zurich-based UBS, cited a conversation on or about May 21, 2009, between Hayes and an individual only identified as ‘Trader B.’ That trader is Adolph, two people with knowledge of the exchange said.

“cld you do me a favour would you mind moving you 6m libor up a bit today, i have a gigantic fix,” Hayes said, according to the filing.

“I can do taht,” Adolph replied. He later increased Deutsche Bank’s six-month yen Libor submission 6 basis points that day, the transcript shows. That was the first increase in the firm’s submission since March 3. It had remained unchanged since April 15.

“u happy with me,” Adolph asked Hayes the following day.

The DB discovery was made months before the world was made aware that the primary market for determining the “fair price” of trillions in rate-linked derivatives and outrights was flatly manipulated by a cabal of bankers (although years after our first allegations in 2009).

So what did Deutsche do when it “discovered” Bittar’s Libor manipulation?

Deutsche Bank’s Christian Bittar, one of the firm’s best-paid traders, lost about 40 million euros ($53 million) in bonuses after he was fired for trying to rig interest rates, three people with knowledge of the move said.

“Upon discovering that a limited number of employees acted inappropriately, we sanctioned or dismissed those involved and clawed back all of their unvested compensation,” Deutsche Bank spokesman Michael Golden said in a statement. “To date we have found no link between the inappropriate conduct of a limited number of employees and the profits generated by these trades.”

After the lender started to scale back its proprietary- trading operations in 2008, Bittar was named head of money market derivatives trading in 2010 and moved to Singapore. He now works for Bluecrest Capital Management LLP, Europe’s third- biggest hedge fund with $30 billion under management.

At least poor Bittar got all of his vested compensation which was what: $100 million? $200 million?

Was anybody else involved in rigging Libor at Deutsche?

Deutsche Bank’s Golden said the Frankfurt-based lender is cooperating with regulators and that its continuing internal investigation has cleared current and former management board members of wrongdoing. Co-Chief Executive Officer Anshu Jain, who said this week he was sickened by the scandal, has faced calls from German lawmakers to publish the findings of a probe by BaFin, the country’s financial regulator, into the lender’s rate-submission process. That inquiry is still to be completed.

And then what happened to Bittar?

But how is that possible? We don’t know. Ask him yourself. 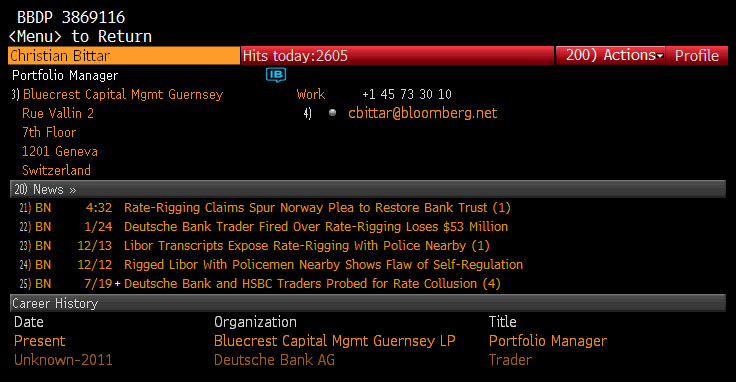