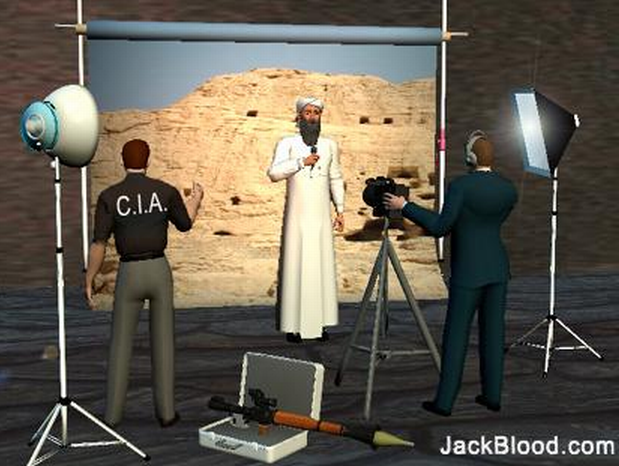 – The CIA and Other Government Agencies Dominate Movies and Television (ZeroHedge, Jan 16, 2013):

Rob Kall points out that the military-industrial complex is the winner of the Golden Globe award:

Homeland won best TV series, best TV actor and actress. It IS a highly entertaining show which actually portrays some of the flaws of the MIIC system.

Argo won best movie and best director. It glorifies the CIA and Ben Affleck spoke with the highest praise for the CIA.

And best actress went to Jessica Chastain of Zero Dark Thirty, a movie that has been vilified for propagandizing the use of torture.

The Military Industrial Intelligence Complex is playing a more and more pervasive role in our lives.  In the next few years we’ll be seeing movies that focus on the use of drone technology in police and spy work in the USA. We’ve already been seeing movies that show how spies can violate every aspect of our privacy– of the most intimate parts of our lives. By making movies and TV series that celebrate these cancerous extensions of the police state Hollywood and the big studios are normalizing the ideas they present us with– lying to the public, routinely creating fraudulent stories as covers for what’s really going on.

I was hoping that Zero Dark Thirty would come up without any awards. I was hoping that at least such blatant propaganda promoting  the lie that torture works would be repudiated by the Golden Globes. That didn’t happen.

The truth is we do live in a time when the police have been massively militarized. We don’t need movies or TV shows that celebrate that militarization. We don’t need entertainment that normalizes the obscene violations of our privacy that the intelligence state is inflicting upon us. We need stories that celebrate people who stand up to this seemingly irrepressible tide that is washing away our freedoms, sucking up all our resources and erasing the last bastions of privacy.

David Walsh notes that the real winner of the 2013 Academy Awards is the CIA:

Zero Dark Thirty, Kathryn Bigelow’s quasi-fascistic glorification of the role played by the CIA in the so-called “war on terror” … was tapped for five awards.

Of course,there is plenty of other war-o-tainment. being peddled by Hollywood.

The military has long had a direct influence on Hollywood. For example, a book published by the University of Texas points out:

The Central Intelligence Agency has been actively engaged in shaping the content of film and television, especially since it established an entertainment industry liaison program in the mid-1990s.

The significant influence that the CIA now wields in Hollywood

The CIA has a pile of script ideas lying around.

The Department of Defense and just about every branch of the military has an entertainment industry liaison similar to the CIA’s.

If you want to make a war film and need a fleet of F-22s, a crowd of Marines, or a Navy aircraft carrier, just call up the Department of Defense’s entertainment media office and they’ll tell you if the Army can spare that M1A1 Abrams tank you’ve always wanted for a day or two of filming.

“The scripts we get are only the writer’s idea of how the Department of Defense operates,” Vince Ogilvie, deputy director of the Defense Department’s entertainment liaison office, told Danger Room. “We make sure the Department and facilities and people are portrayed in the most accurate and positive light possible.”

Hollywood has been working with government organizations to make more credible films for years (for instance, Jerry Bruckheimer and Paramount Pictures worked closely with the Pentagon when filming the 1986 blockbuster “Top Gun”). But the phenomenon is under newfound scrutiny. There was a bit of a kerfuffle recently when some in the press and in Congress speculated about whether the government will give Sony Pictures any pointers while they make a film about the killing of Osama bin Laden.

In a letter to the Defense Department and CIA last month, Rep. Peter King expressed outrage at the Pentagon’s relationship with the film’s director, Kathyrn Bigelow. King claimed that she had already been made privy to sensitive information that could put American lives at risk.

Standard procedure is to review the script, make notes on what the Defense Department would like changed, and kick it back to the producer. If the changes are made, the military will provide whatever help they can – declassified information, equipment, personnel, etc. – for a price.

Why has the Defense Department recently partnered with 20th Century Fox to make an X-Men/U.S. Army ad or with explosion-enthusiast Michael Bay to make all three Transformers movies? In The Washington Post, David Sirota suggests entertainment like this is “government-subsidized propaganda.”

The Guardian noted in 2001 that this has been happening for a long time:

For the first time in its history, the [CIA] has appointed an official PR liaison with Hollywood: veteran CIA operative Chase Brandon, whose 25-year career was spent defending democracy, it says here, in benighted South American theatres of the cold war.

These days, his brief is to preach a revised CIA gospel to Tinseltown, to overcome the lamentable image the agency acquired during the 1977 Church Congressional Commission on Assassinations, which it has struggled to shake off.

Other government agencies like the FBI, the Secret Service and the armed services discovered long ago the benefits of lending their cooperation to movies like Silence of the Lambs, In the Line of Fire and Top Gun.

Coming late to the game, the beleaguered CIA now has to overcome 25 years of suspicion – not to mention a grim history of covert assassinations, secret wars, illegal coups d’état, and the damaging revelations of former agents such as Philip Agee or John Stockwell – if it wants to clean up its image. This may be an uphill struggle, as the agency faces criticism for its failure to predict the events of September 11 – but suddenly, perhaps fortuitously, a slew of movies and TV shows about the CIA will be launched this autumn.

Brandon and the agency have approved eye-opening stuff. The Agency is a new CBS drama, full of best-and- brightest types rolling up their sleeves and attacking problems of national security, West Wing-style. Its first episode depicted a CIA attempt to foil an assassination attempt on Fidel Castro. This might surprise anyone remembering the agency’s attempts in the early 1960s to knock off Fidel with exploding cigars, sub-contracted mobsters and chemicals designed to make his beard fall out – to say nothing of the abortive Bay of Pigs invasion.

The company also lent their support to Alias, an action series featuring Jennifer Garner as a grad student-superspy a few degrees

away from La Femme Nikita. The Chris Rock-Anthony Hopkins comedy Bad Company traffics in similar comic-strip depictions of the CIA that Brandon was happy to help.

Receipt of the CIA’s corporate imprimatur is conditional upon only one thing: a totally sympathetic portrayal of company business.

It used to be the case that if a movie explicitly condemned CIA actions – such as Under Fire – the studios could be counted on to bury it.

In fact, the CIA first started working with Hollywood in the 1950s:

The CIA has been working with Hollywood since the 1950s.

The CIA first started working with Hollywood to influence foreign audiences. “Their purpose was essentially to shape foreign policy or to win hearts and minds overseas during the cold war,” she says.

The CIA developed a think tank to fight communist ideology, which negotiated the rights to George Orwell’s “Animal Farm” — getting a talking pig on the screen 20 years before “Charlotte’s Web.” Jenkins says the CIA also wanted to promote a certain view of American life, for instance pressing for line changes in 1950s scripts to make black characters more dignified, and white characters more tolerant. This “politically correct” image was intended to promote an attractive image of America to a world picking sides in the Cold War.

Of course, pro-torture productions such as Zero Dark Thirty and the CIA-sponsored tv show 24 are 100% false:  the top conservative and liberal interrogation experts say that torture hurts rather than helps national security.

And the CIA’s drone problem creates many more terrorists than it kills.

And the CIA’s other efforts have made us more vulnerable … not safer.

But this is Tinseltown we’re talking about … so no one expects the truth.

Of course, the CIA and other government agencies have long directed the mainstream media as well.

No wonder the mainstream media is always pro-war, and happily trumpets disinformation about supposed enemies to drum up support for new wars.  Even after the Iraq WMD propaganda was thoroughly debunked, the old media is at it again