With the market still hopeful of some deus ex resolution to the Fiscal Cliff will take place in the last few trading sessions of the year (one where the market itself will not have to be the catalyst for such a resolution, because once the selling starts in earnest, who knows if and when it stops, hence the loading up on prodigious amounts of puts), here is Iran out of left field, adding yet another known unknown to the inequality, announcing that it will begin six days of naval drills in the Straits of Hormuz on Friday. In other words a one year flashback deja vu, as Iran held a similar 10-day drill last December, when everyone was expecting an imminent escalation out of the endless Israel-Iran foreplay and was analyzing which were the new moon days allowing Israel unobstructed access to the greatest distraction of all – Iran’s nuclear facility being moved under a mountain: a catalyst which Israel repeatedly said is the only reason to attack a weaponizing, nuclear Iran, and which took place some time in 2012. Now that the official window of opportunity is closed, will Israel tone back on the aggressive rhetoric? Hardly: after all that is precisely why the Syrian “outlet valve” has been put in play over the past 6 months.

Iran will begin six days of naval drills in the Strait of Hormuz at the end of this week, an Iranian naval commander said on Tuesday, an exercise meant to showcase its military capabilities in what is a vital oil and gas shipping route.

The “Velayat 91” drills will be held from Friday to Wednesday across an area of about 1 million square kilometres in the Strait of Hormuz, the Gulf of Oman and northern parts of the Indian Ocean, said Habibollah Sayyari, according to Iranian media.

Iranian officials have often said that Iran could block the strait – through which 40 percent of the world’s sea-borne oil exports pass – if it came under military attack over its disputed nuclear programme.

Sayyari was quoted as saying the new drill would test the navy’s missile systems, combat ships, submarines and patrol and reconnaissance methods.

“In this exercise we will use the navy’s newest weapons and tactics,” Sayyari said. “Certainly we will observe the marine borders of neighbouring states and will carry out our exercises according to international laws and regulations.”

A heavy Western naval presence in the Gulf is meant to deter any attempt to block the waterway.

And making sure there is no chance of escalation, the aircraft carrier Stennis, CVN-74, as shown in the US naval update map courtesy of Stratfor will be right there, quietly watching every move of the Iranian navy, often times smack in the middle of the drills. 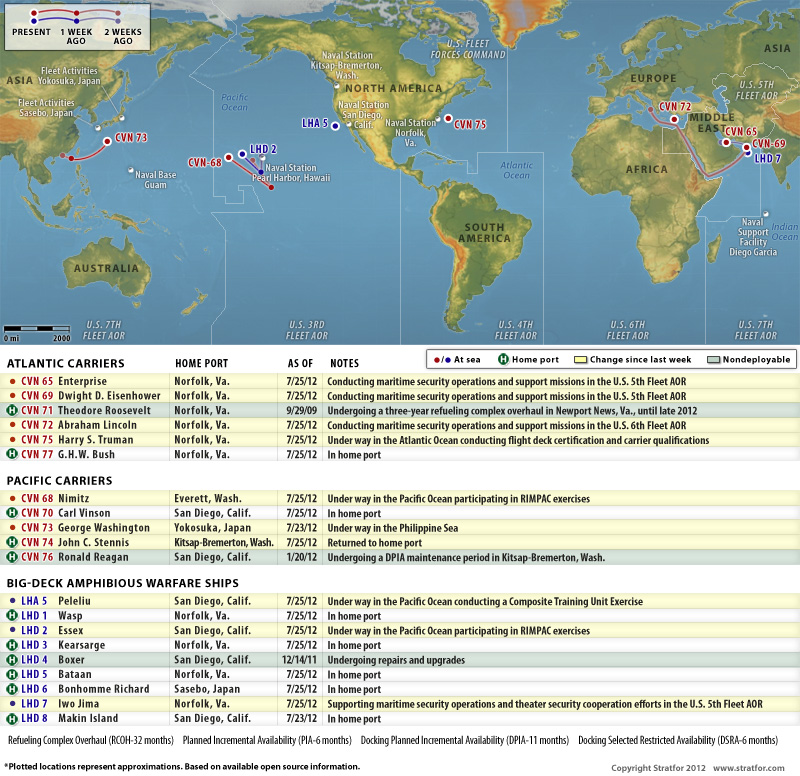 And just to get the blood really going, Iran media has reported that there has been another Stuxnet-based attempt to cripple Iranian infrastructure. As a reminder, Stuxnet is the computer “virus” which crippled the Iranian nuclear power plant and set back the project by months. Via AP:

An Iranian semi-official news agency says there has been another cyberattack by the sophisticated computer worm Stuxnet, this time on the industries in the country’s south.

Iran has repeatedly claimed defusing cyber worms and malware, including Stuxnet and Flame viruses that targeted the vital oil sector, which provides 80 percent of the country’s foreign revenue.

Tehran has said both worms are part of a secret U.S.-Israeli program that seeks to destabilize Iran’s nuclear program. The West suspects Iran is pursuing a nuclear weapons program, a charge Tehran denies.

Has the time come for perfectly inexplicable bid-hitting attacks (thanks BIS) to start targeting the Brent complex just as geopolitical tensions threaten to push it far higher once more?  The good news is that at least silver may be allowed to crawl out above $30 now that central banks are certain to not pump about $2 trillion in 2013. Oh wait…

1 thought on “Iran Launches Week-Long Straits Of Hormuz Naval Drill On Friday, Next To US Aircraft Carrier”