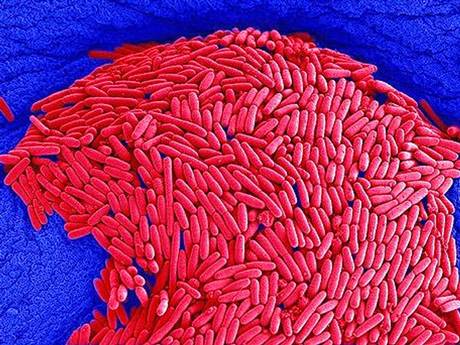 International travellers carried the Canadian strain to Britain and the rest of Europe, where it caused a notorious series of outbreaks in UK hospitals between 2003 and 2006, leading to hundreds of patients dying from bowel complications.

“We used advanced DNA sequencing to determine the evolutionary history of this epidemic and the subsequent pattern of global spread,” said Miao He, of the Wellcome Trust Sanger Institute in Cambridge, which carried out the genetic analysis.

“We found that this outbreak came from two separate epidemic strains or lineages of C. difficile, both emerging from North America over a very short period and rapidly spread between hospitals around the world.”

The study found that both strains of bacteria had undergone the same tiny mutation in a key gene that conferred resistance to the antibiotic fluoroquinolone.

Once resistance had evolved, the two strains quickly spread among hospital patients in North America and then Europe.

Trevor Lawley, the leader of the study at the Sanger Institute, said: “Until this research we didn’t realise that the same mutation had actually happened twice independently of one another. It shows that this is not a rare event and can happen again.

“There is a link between acquiring resistance and appearance of these mutations around the world, and the use of the antibiotics.”

The study, published in the journal Nature Genetics, said the evolution and persistence of fluoroquinolone-resistant strains of C. diff was likely to be the result of widespread use of this class of antibiotics in North America in the late 1990s and early 2000s.

Professor Brendan Wren, of the London School of Hygiene and Tropical Medicine, one of co-authors of the study, said: “Up until the early 2000s, fluoroquinolone was an effective treatment of C. diff infection. We’ve seen that since these strains acquired resistance to this frontline antibiotic, not only is it now virtually useless against this organism, but resistance seems to have been a major factor in the continued evolution and persistence of these strains in hospitals and clinical settings.”

The scientists believe the outbreaks of FQR2 in British hospitals can be traced to three separate transmissions – from North America to hospitals in Exeter, Ayreshire and Birmingham. Another transmission, in Maidstone, came from Europe.