– Hogwash, Syria Won’t Use Chemical WMDs Against Its People

– ‘West Moves In For Syrian Endgame And War On Iran’

– US, French Troops Prepare For Syria Invasion In Response To ‘Chemical Weapons’ Threat 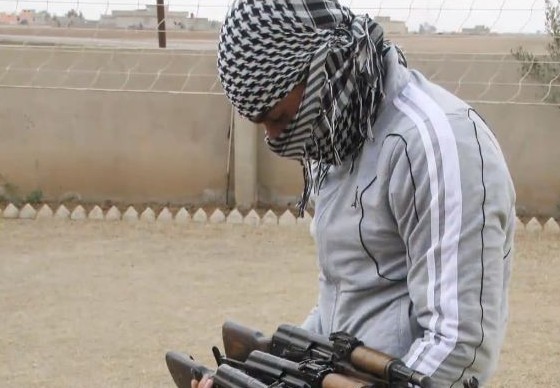 A shocking report by McClatchy Newspapers’ David Enders reveals that the militants now on the front lines of the rebel uprising in Syria – supported by the Obama administration and other western powers – are Al-Qaeda terrorists who killed U.S. troops in Iraq and openly espouse their desire to “fight the U.S.” after they topple Bashar Al-Assad.

The official narrative at first attempted to deny the existence of Al-Qaeda terrorists in Syria altogether, before being forced to admit they were present but downplaying their role as limited and not characteristic of the rebel uprising.

However, Enders documents how Jabhat al Nusra, a group directly affiliated with Al-Qaeda, “has become essential to the frontline operations of the rebels fighting to topple Assad,” that the group is “critical to the rebels’ military advance” and how it conducts the “heaviest frontline fighting” in “battle after battle across the country.”

A journalist cited in the article also discovered “Nusra’s fighters on every frontline he visited.”

Jabhat al Nusra has claimed responsibility for numerous suicide bombings and other attacks that have killed hundreds of innocent people. Last weekend, disturbing footage emerged of one of their members slaughtering prisoners in cold blood. Extremist militants have also ransacked Christian churches and carried out sectarian beheadings.

The article quotes one of the members of the group, who stated unequivocally, “When we finish with Assad, we will fight the U.S.!”

The journalist who heard the comment considered that it could have been a “joke,” but it didn’t appear to be much of a laughing matter when Syrian rebels were shown on camera proudly burning U.S. flags on two separate occasions recently.

As we previously documented, rebel supporters chanted anti-American slogans as they torched the American flag in Homs and Aleppo.

Another opposition fighter recently spoke of his desire to see the Al-Qaeda flag fly over the White House once the rebels are victorious across the region. Suffice to say, he didn’t appear to be joking.

Syrian rebel fighters are routinely photographed wearing the Al-Qaeda motif. There are also innumerable You Tube videos that show opposition forces flying the Al-Qaeda flag – the same distinctive black flag with white Arabic lettering that was flown by rioters during anti-U.S. demonstrations in numerous countries earlier this year.

French Surgeon Jacques Bérès, who worked at a hospital in Aleppo commented that at least half of the militants he treated for injuries were Al-Qaeda terrorists whose goal is to impose sharia law across Syria and the whole region. A German report estimated the figure of foreign fighters in Syria to be even higher – a staggering 95 per cent.

As we have also documented at length, the McClatchy piece emphasizes the fact that Jabhat al Nusra was responsible for killing U.S. troops in Iraq, noting how the group relies on, “the same people and tactics that fueled al Qaida in Iraq – an assertion that is borne out by interviews with Nusra members in Syria.”

“Among Nusra fighters are many Syrians who say they fought with al Qaida in Iraq, which waged a bloody and violent campaign against the U.S. presence in that country and is still blamed for suicide and car bombings that have killed hundreds of Iraqis since the U.S. troops left a year ago,” writes Enders.

The article asserts that the presence of these terrorists in Syria, “worries U.S. and other Western officials,” although it obviously wasn’t too much of a concern when the Obama administration signed off on over $200 million dollars in aid to the FSA rebels.

Nor was it much of a worry for the CIA when it helped the likes of Saudi Arabia, Turkey and Qatar funnel heavy arms to rebel groups in the region.

Although the establishment media has billed the rebels’ cause as a democratic uprising, one of the leaders of Jabhat al Nusra quoted in the McClatchy piece, Iyad al Sheikh Mahmoud, made it clear that there would be no free elections in Syria once Assad is toppled.

“Eighty percent of Syrians want Islamic law,” he said, referring to sharia law, an arcane and inherently brutal system of justice, with harsh punishments for those deemed to have broken its moral code, including torture and execution for sins such as adultery, homosexuality and robbery. The law also stifles free speech as it criminalizes criticism of Islam, the Quran, and the prophet Muhammad.

Why is the Obama administration supporting armed thugs who have not only killed U.S. troops in Iraq on behalf of Al-Qaeda, but also advocate the imposition of sharia law across the entire middle east and the overthrow of the United States and its replacement with an extremist Muslim dictatorship?