The invisible hand at work once again as fat-fingered demand dominates union-stifled supply… $8,000 for a single Twinkie… and other offers… It seems, once again, that there are more than a few greater fools who still have no idea just how the bankruptcy process works… will Twinkies be rebranded Bimbettes? 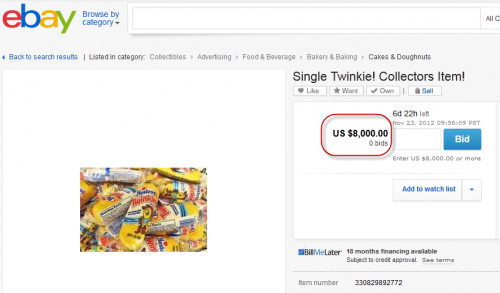 Here’s what’s currently up for sale and bid on eBay:

There is, however, a small problem for all those hoping for a collectible value on Hostess products after today, and lifting these ridiculous ebay bids: Grupo Bimbo, who wanted to buy Hostess outright in 2006, will almost certainly buy the various now defunct trademarks in a Stalking Horse liquidation auction, and will absolutely continue making them (as we discussed here) collapsing any residual value as Twinkies will be found, in the same identical box, in a grocery store near you.

Sadly, having zero understanding of the bankruptcy process never stopped Americans from making decisions: such as taking one’s words for what would happen to America’s auto industry had contract law not been inverted several years ago and it the car companies had “failed.”