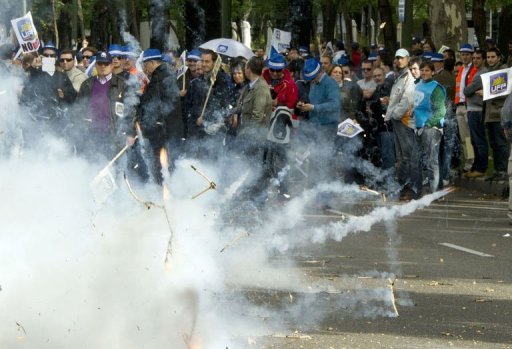 Hundreds of Spanish police officers protested outside the interior ministry in Madrid on Saturday to denounce budget cuts and the elimination of benefits, as firecrackers burst into the air.

Like all Spanish civil service employees, police officers are taking the full blow of the austerity measures brought in by Prime Minister Mariano Rajoy’s right-wing government in a bid to tackle the debt crisis.

“Police officers can no longer take it,” one large banner said amid a sea of officers wearing blue caps and blocking the Paseo de la Castellana, the main avenue running through the centre of the Spanish capital.

“We came to express our anger at the way the government treats us, not only because they have removed Christmas bonuses, but also because they are eliminating our rights,” said Fran Estacio, a 33-year-old officer from Valencia, in eastern Spain.

Starting January 1, he said, they will lose three of the six days of supplementary holidays that police officers are allowed every year, in addition to their regular vacation.

They will also see cuts to their salary during sick leave.

Spain’s economy is in recession, with one in four workers unemployed. A heavy debt refinancing burden and high borrowing costs are pushing the country towards seeking a sovereign bailout.

Earlier this month, Rajoy’s government unveiled an austerity budget for 2013 despite mass street protests, under pressure from European authorities to cut Spain’s deficit and restructure its economy.