Over the past 4 years the Fed’s strategy in response to the Second Great Depression has been a simple one: purchase record (and now open-ended) amounts of fixed income product (offset by releasing record amounts of reserves in the banking universe which in turn has converted every bank into a TBTF and Fed-backstopped hedge fund, as the concurrently shrinking Net Interest Margin no longer leads to the required ROA from legacy bank lending) to stabilize the bond market, and to crush yields in hopes of forcing every uninvested dollar to scramble for equities, primarily of the dividend paying kind now that dividend income is the only “fixed income” available.

So far the strategy has failed for the simple reason that the smart money instead of being “herded”, has far more simply decided to just front-run the Fed thus generating risk-free returns, while the “dumb money”, tired of the HFT and Fed-manipulated, and utterly broken casino market, has simply allocated residual capital either into deposits (M2 just hit a new all time record of $10.2 trillion) or into “return of capital” products such as taxable and non-taxable bonds. Alas none of the above means that the Fed will ever stop from the “strategy” it undertook nearly 4 years ago to the day with QE1 (as any change to a “strategy” of releasing up to $85 billion in flow per month will be immediately perceived as implicit tightening and crash the stock market). Instead, it will continue doing more of the same until the bitter end. But how much more is there? To answer this question, below we present the entire universe of marketable US debt, in one simple chart showing the average yield by product type on the Y-axis, and the total debt notional on the X. 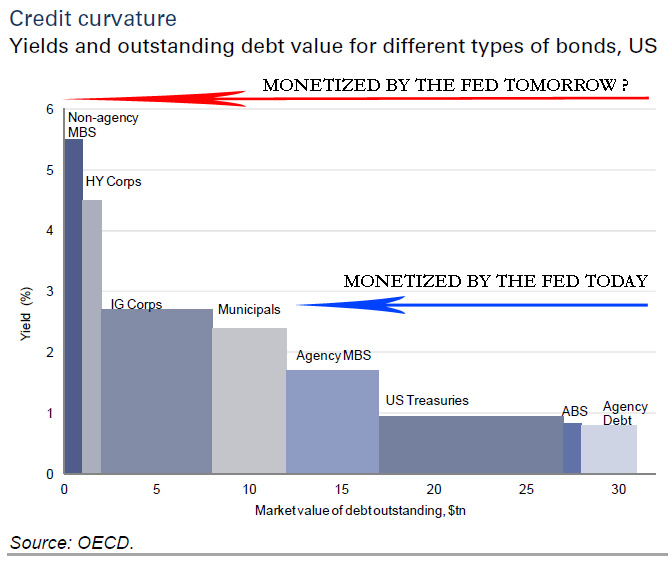 The Fed, with the recent advent of QEternity, aka the incorrectly named ‘QE 3’,  is already engaged in the monetization of virtually everything to the right of Municipal debt (under the blue arrow in chart below). The reason why the Fed needs to continue buying up Treasurys in the 10Y+ interval is simple – in doing so it is funding the long-end of US deficit spending, aka everything that has a greater than zero duration in the age of ZIRP. However, that amount is merely enough to keep the status quo as is, in other words to keep the deficit government funded. Remember that the Fed’s ultimate goal is to inflate the debt stock of both the US and the world. Which means that not even QEternity will be enough. It also means that very soon the Fed will be forced to shift its monetization appetite further to the left of the X-axis, and increasing buy up more and more higher yielding fixed income product, in a rerun of Japan, which the US has now become. Recall that the BOJ is also openly monetizing Corporate debt, as well as various equity-linked products.

Said otherwise, the “smart money” is now loading up on those debt products, IG and HY debt, munis and non-agency MBS, which the Fed will sooner or later become the buyer of first, last and only resort. And just like Bill Gross was buying up MBS on record margin in February (as we showed) in advance of QE3, so now everyone else is once again merely preparing for the inevitable next step, as the Fed proceeds to monopolize the entire marketable debt universe.

Sadly for the Fed this also means that any incremental free money will simply continue to chase more fixed income product before the Fed starts buying it (thus providing an easy bid to sell into), instead of buying up already ridiculously overpriced equities (where record profit margins are about to slam into the immovable walls of soaring input and commodity costs crushing the “cheap” P/E illusion), which in turn will force Bernanke to one day in the near future, go full Japanese retard, and announce the Fed will as a matter of policy, as opposed to simply via the PPT and Citadel in times of desperation, commence buying equities. But that’s a story for another day.