– Iran Launches Submarine And Destroyer Into Gulf During US Naval Exercises (ZeroHedge, Oct 18, 2012):

This week the US, UK, France, and a few Middle Eastern countries are conducting naval exercises in the Gulf of Persia to practice clearing mines that Iran, or other groups may place around the Straits of Hormuz in an attempt to disrupt the movement of oil tankers in the region.

Mohammed Ali Jafari, the commander of the Islamic Revolutionary Guard Corps, said that the “exercise is a defensive exercise and we don’t perceive any threats from it. We are not conducting exercises in response.”

Yet this is not the impression that is given.

Just yesterday, according to the official IRNA news agency, upon the direct orders of Supreme Leader Ayatollah Ali Khamenei Iran launched a refitted Tareq-901 submarine and a Sahand destroyer into the Gulf from the port of Bandar Abbas. 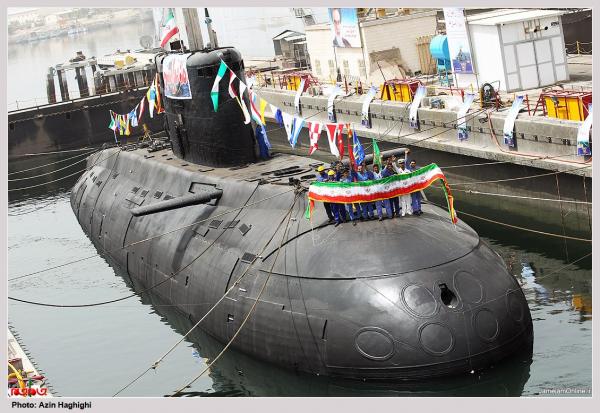 Khamenei addressed his troops, saying that “the armed forces must reach capabilities such that no one can attack the strong fence of the country and the dear people of Iran.”

Israeli Prime Minister Benjamin Netanyahu announced on Sunday that Tehran is now very close to building a nuclear bomb, leading some to fear that Israel may take things into their own hands and strike against Iranian nuclear facilitie