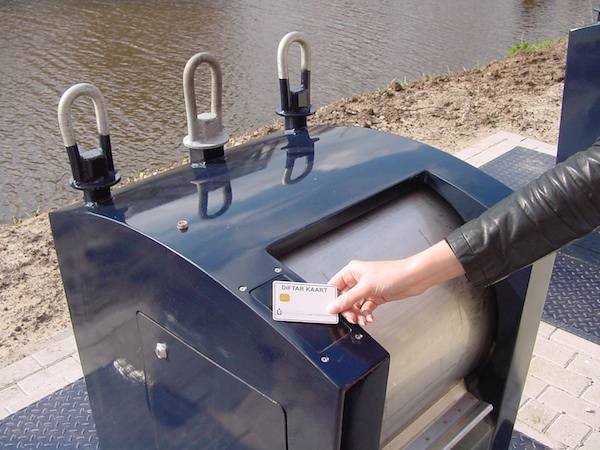 The Netherlands is rolling out intelligent bins that demand ID before accepting rubbish, and let the truck know when they need to be emptied, pointing towards the day when we’ll all have to pay for the stuff we throw away.

Altogether 6,000 intelligent bins are being deployed across The Netherlands, and green think tank Environmental Resource Management has calculated that just one of the cities involved (Groningen) saved itself £72,000 in the first year of deployment, and reduced its carbon footprint by 18 per cent, though the council seems more interested in the reduction in thefts of bins and ability of the system to prevent locals knocking up their own.

The robo-bins have an RFID reader in the lid, and will only open when presented with some ID. The quantity of rubbish is then used to calculate the customer’s bill, but things going into the recycling pile are free – so the scheme drives recycling. The bins also know how much rubbish has been dumped, so they use their embedded phone to call up a truck over Vodafone’s GPRS network when they’re full, reducing the distance trucks have to drive.

Vodafone and waste-management specialist Mic-O-Data, who implemented the system, are highlighting the carbon savings and green credentials, but the council is more interested in the reduced theft, and the ability to avoid having to empty unofficial bins which were proliferating across the city.

Theft is down by more than 70 per cent, apparently, locals having previously been nicking each other’s bins with gay abandon, and the reduction has saved the council some serious money. Last year the council announced the chipped bins had helped it remove 3,500 containers from circulation, and billed 640 houses for the additional waste receptacles they were illegally using.

That’s not quite so green, but it’s an equally-good reason to tag ‘n’ lock bins. Charging people by the weight of rubbish they produce is an obvious step, and the only one which will make customers demand reductions in packaging. Connecting those bins to a cellular network might be too much for the UK Wheeliebin – but more intelligent rubbish containers are almost inevitable, no matter how the cost savings are achieved.