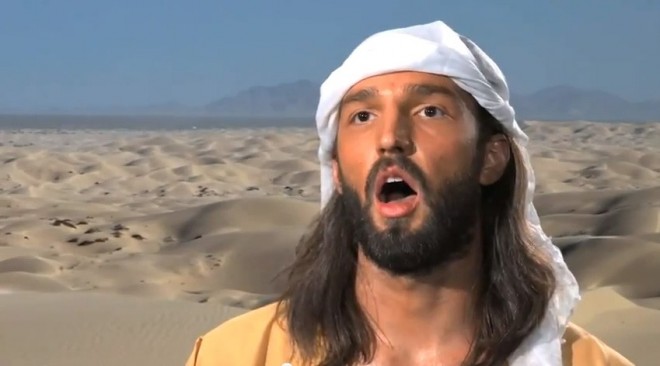 A screenshot from “The Innocence of Muslims.” Photo: YouTube

Before he was involved in the making of a noxious video that provided an excuse for anti-American riots in the Middle East, and before he was convicted of federal bank fraud, Nakoula Basseley Nakoula was arrested on charges relating to the making of angel dust.

Court records reviewed by Danger Room show that Nakoula and a co-defendant were brought before the Los Angeles County Superior Courthouse in Downey, California on April 15, 1997. They were charged with possessing the narcotic’s chemical precursors with “the intent to manufacture phencyclidine,” otherwise known as angel dust or PCP.

In the latest in a series of odd revelations about the man thought to be at center of a viral video, “The Innocence of Muslims,” which has been publicly seized upon by people in Libya, Egypt, and Tunisia as a reason to attack U.S. embassies. At least four American government employees have been killed during the confrontations. And that’s brought enormous scrutiny to Nakoula, an Egyptian immigrant and gas station owner, who has alternatively confirmed and denied a role in the making of “Innocence.”

In recent days, we’ve learned that Nakoula used 14 different aliases — including “P.J. Tobacco” and “Kritbag Difrat” — in a complex check kiting scheme. We’ve learned that Nakoula was sentenced to 21 months in federal custody for the affair. According to The Smoking Gun, Nakoula was released from the the United States Penitentiary in Lompoc, California in September, 2010. He spent the following nine months in and out of a halfway house in Long Beach. Unnamed officials tell ABC News he wrote the script for the film, which depicts the prophet Muhammad as a thug and a child molester, while in prison.

The punishment was relatively gentle, even though it wasn’t Nakoula’s first encounter with the law. That’s because Nakoula had decided to become a federal informant.

“I am sorry for what happened. Now I know it was wrong. I decide to cooperate with the government to retrieve some of those mistakes,” Nakoula told Judge Christina Snyder in June of 2010, according to a sentencing transcript obtained by The Smoking Gun.

The man Nakoula agreed to help the feds catch was Eiad Salameh, the ringleader of the check kiting scheme and “a notorious fraudster who has been tracked for more than a decade by state and federal investigators,” the Smoking Gun says. “In his debriefings, Nakoula said he was recruited as a ‘runner’ by Salameh, who pocketed the majority of money generated by the bank swindles.”

Because of the promised help, because of his many ailments (including Hepatitis C and diabetes) and maybe because of a friendly letter from a friend calling Nakoula “a God-fearing man whose first priority is his family,” Bakoula was sentenced to just 21 months in prison.

That’s in spie of his previous arrests. In August of 1991, he was convicted on two counts of selling watered-down gasoline. And then came the arrest for PCP manufacturing in 1997. A local judge found there was probable cause for the case to continue against Nakoula and a co-defendant, Khaled Yameen Abraham, on August 6th of that year. Nakoula and Abraham were also briefly charged with conspiracy.

Three months later, Abraham was convicted on the PCP charge. Nakoula, on the other hand, was not. Nearly five years later, the case against him was dismissed, for reasons unknown.

According to The Daily Beast, Nakoula and Abraham weren’t just attempting to make PCP. The news site claims that the pair were arrested for trying to mass-produce methamphetamine. Nakoula was arrested on March 27, 1997, according to the Beast, with $45,000 in hundreds and twenties in a paper lunch bag on the seat beside him. Abraham’s house in Lake Elsinore contained 30 boxes of pseudoephedrine, meth’s central ingredient. Another 99 cases were allegedly found at the storage facility. Danger Room hasn’t been able to confirm this account. But it’s entirely possible that Abraham and Nakoula were simultaneously busted for being both PCP and meth makers.

1 thought on “‘Muslims’ Movie Producer Was Arrested for PCP, Snitched for Feds”