I call that truly cost-effective genocide:

More links on chemtrails down below.

Man-made global warming is a SCAM …

… and CO2 is not to blame for anything:

Watch Al Gore’s (proven to be) fake hockey stick graph presentation in ‘An Inconvenient Truth’ (or on YouTube) and see for yourself that rises in C02 lag 800 years behind temperature rises.

How does it feel to pay taxes for exactly NOTHING? 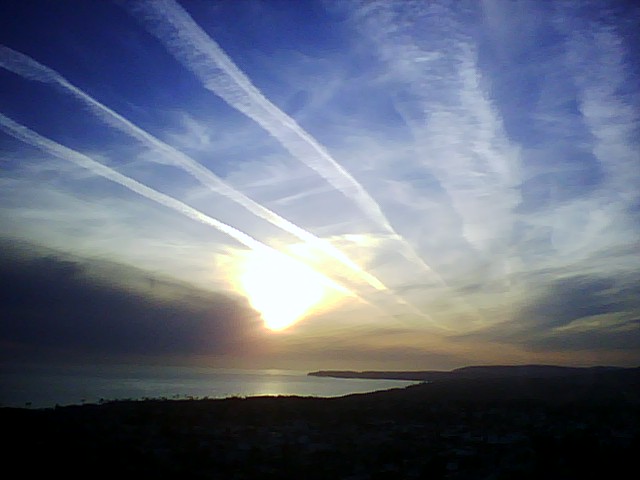 Planes or airships could carry sun-dimming materials high into the atmosphere for an affordable price tag of below $5 billion a year as a way to slow climate change, a study indicated on Friday.

Guns, rockets or a pipeline into the stratosphere would be more expensive but generally far cheaper than policies to cut world greenhouse gas emissions, estimated to cost between $200 billion and $2 trillion a year by 2030.

Transporting a million tonnes of particles to at least 18 km (11 miles) above the Earth every year to form a sunshade is “both feasible and affordable”, U.S. scientists concluded in the journal Environmental Research Letters.

The strategy, called “solar radiation management”, broadly imitates a volcanic eruption. The 1991 eruption of Mount Pinatubo in the Philippines, for instance, blasted out a haze of sun-reflecting particles that slightly cooled the planet.

The authors did not examine whether such “geo-engineering” of the planet was a good idea. Other studies show it might have unwanted side effects, such as changing rainfall patterns.

“One attribute of solar radiation management is that it is quite inexpensive,” co-author Professor Jay Apt of Carnegie Mellon University in Pittsburgh told Reuters.

New aircraft, specially adapted to high altitudes, would probably be the cheapest delivery system with a price tag of $1 to $2 billion a year, they said. A new hybrid airship could be affordable but might be unstable at high altitudes.

A 20 km (12 mile)-long “space elevator” pipe hanging from a helium-filled platform was possible in theory but highly uncertain. Giant guns or rockets would be much more costly.

Some experts favour geo-engineering as a quick fix when governments are far from a deal to slow climate change that is expected to cause more heatwaves, floods and rising sea levels.

Senior officials are meeting in Bangkok this week for a new round of U.N. talks, aiming to agree a deal in 2015. Global greenhouse gas emissions have continued to rise, with China, the United States and the European Union the top emitters.

Dimming sunlight would not, for instance, slow the build-up of carbon dioxide in the atmosphere, which is making the oceans more acidic and undermining the ability of creatures such as mussels or lobsters to build their protective shells.

Co-author David Keith at Harvard University said there were serious risks in trying to dim the sun’s rays. But he said it might also “increase agricultural production by limiting impacts of climate change such as heat stress.”

“Research into climate engineering, including cost, is vitally important,” said Matt Watson, a lecturer in Natural Hazards at Bristol University. “However, we must not get drawn into discussion where economics becomes the key driver.”

Apt said temperatures could jump sharply under suddenly clear skies if society spewed sulphur into the stratosphere for years but then halted, judging that disadvantages outweighed the benefits.

“Abrupt stopping of the delivery of particles to the stratosphere would cause very rapid climate changes,” he said. (Reporting by Alister Doyle; editing by Andrew Roche)