– Signs of Extreme Distress -Why You’re a Lot Poorer Than You Thought You Were (CounterPunch):

You’re a lot poorer than you thought you were.

According to a report by Sentier Research “real median annual household income… has fallen by 4.8 percent since the ‘economic recovery’ began in June 2009.”

That’s worse than the 2.6 percent decline that took place during the recession itself. (between July 2007 to June 2009) All told–from the beginning of the slump in 2007 until today–median household income has dropped an eyewatering 7.2 percent. (“Changes in Household Income During the Economic Recovery: June 2009 to June 2012″, Sentier Research)

Like I said, you’re a lot poorer than you thought you were.

The Sentier Research report comes on the heels of a similar report from the Fed which was released in June showing that middle class families saw a nearly 40 percent decline in their net worth between the years 2007 to 2010. The Fed’s 80-page tri-annual Survey of Consumer Finances, points to the Great Recession as the putative cause of the overall decline in wealth, but the Fed’s lopsided policies could be as easily blamed. Low interest rates, lax lending standards and outright fraud generated asset-price bubbles that wiped out 2 decades of economic gains for working people in the US.

The Fed’s survey found that the median net worth of families in the US fell by 38.9 percent between 2007 and 2010, from $126,400 to $77,300. Also, the median value of a US home dropped by 42 percent, from $95,300 to $55,000 in the same period. Plunging housing prices have increased the burden of mortgage debt leaving more than 20 percent of all homeowners with negative equity which greatly increases the probability of default.

Is it any wonder why consumer confidence is at its lowest point since November 2011? Or why mom and pop investors are still fleeing the stock market in record numbers 4 years after Lehman Brothers failed? Or why the yields on 10-year Treasuries are still hovering below 2 percent? Or why bank deposits now vastly exceed loans?

All of these are signs of extreme distress, which is why working people have grown so gloomy about the future. Did you know that (According to the Pew Research Center) 61 percent of all Americans were “middle income” back in 1971, while, today, the number has been shaved to 51 percent? That explains why 85 percent of the people surveyed said “that it is harder to maintain a middle class standard of living today compared with 10 years ago.” The majority of the people also admitted that they’ve had to reduce their spending in the past year.

What all of these reports indicate is that the US middle class is being drawn-and-quartered by economic policies which serve to enrich the few at the cost of the many.

Of course, Fed chairman Ben Bernanke is going to “put things right” by launching another round of quantitative easing (QE) which is supposed to boost growth and lower unemployment. Unfortunately, QE doesn’t really work like that, in fact, the Bank of England just released a report that proves that central bank asset purchases disproportionately benefit the rich. Here’s a clip from an article in the Washington Post:

“The richest 10% of households in Britain have seen the value of their assets increase by up to £322,000 [$510,000] as a result of the Bank of England‘s attempts to use electronic money creation to lift the economy out of its deepest post-war slump. …

The Bank of England calculated that the value of shares and bonds had risen by 26% – or £600bn – as a result of the policy, equivalent to £10,000 for each household in the UK. It added, however, that 40% of the gains went to the richest 5% of households.”

It’s not hard to see why this happens. One way the bank’s quantitative easing program works, in theory, by pushing up asset prices in order to support the broader economy. And, according to the Bank of England, the median British household only holds about $2,370 in financial assets. So the direct benefits largely accrue to wealthier households.

What about the United States? Much like in Britain, the distribution of financial assets are also heavily skewed. …. So any move by the Fed to push up asset prices is likely to increase wealth inequality in the short term.” (“Will the Fed’s efforts to boost the economy only benefit the wealthiest?”, Washington Post)

So QE is just a scam to line the pockets of the investor class. Imagine that! It took 4 years and a research team of financial geniuses from the BOE to figure that out.

And here’s something else that’s worth mulling over; working people are getting totally screwed in the deal. Not only are savers and fixed-income retirees being robbed of the puny gains they would have seen if rates were in their normal range instead of zero, but also the prospect of more QE has sent gas futures spiking, while food prices are sure to follow. This is from Bloomberg in an article titled “Bernanke Boosts Oil Bulls to Highest Since May: Energy Markets”:

Money managers increased net-long positions, or wagers on rising prices, by 18 percent in the seven days ended Aug. 21, according to the Commodity Futures Trading Commission’s Commitments of Traders report on Aug. 24. They were at the highest level since the week ended May 1.” (Bloomberg)

Higher prices at the pump. That ought to rev-up consumer spending, don’t you think?

Still, Bernanke and his fellow doves at the Fed aren’t going to be deterred by something as inconsequential as the travails of working people. Oh no. After all, he has his real constituents to consider, the parasitic Wall Street robber barons. Their needs come first, and what they want is another round of funny-money so they refill the larder at the Hamptons with Beluga and bubbly. That’s why members of the Fed have already started chirping for more “more accommodation”. Here’s what Chicago Fed President Charles Evans had to say last week in his ominous-sounding bulletin titled “Some Thoughts on Global Risks and Monetary Policy”:

“Finding a way to deliver more accommodation… is particularly important now because delays in reducing unemployment are costly. An unusually large percentage of the unemployed have been without work for quite an extended period of time; their skills can become less current or even deteriorate, leaving affected workers with permanent scars on their lifetime earnings. And any resulting lower aggregate productivity also weighs on potential output, wages and profits for the economy as a whole. The damage intensifies the longer that unemployment remains high. Failure to act aggressively now could lower the capacity of the economy for many years to come….

Given the risks we face, I think it is vital that we make such moves today. I don’t think we should be in a mode where we are waiting to see what the next few data releases bring. We are well past the threshold for additional action; we should take that action now.”

What gall! Does anyone really believe that a Fed president gives a rat’s ass about lower unemployment? It’s a joke.

And where’s the proof that QE lowers unemployment, increases wages or benefits the economy as a whole? Nowhere. Evans idea of “accommodation” is just another way of shoveling money to his rich friends.

Now get a load of this in the Wall Street Journal:

“During the recession, people who lost long-held jobs struggled to find new employment and often took substantial pay cuts if they did find new work. Little appears to have changed after the recession ended, a new Labor Department report shows.

From 2009 to 2011, 6.1 million workers lost jobs they had held for at least three years. Just over half — 56% — of them were reemployed by this January, the department found in its latest survey of displaced workers. Two years ago, the survey found that 49% of people who lost such jobs from 2007 to 2009 were reemployed.

People lucky enough to find new work are often taking steep wage cuts. Of the displaced workers who lost full-time wage and salary jobs from 2009-2011 and were reemployed by January, just 46% were earning as much or more than they did in their lost job. A third of them reported earnings losses of 20% or more.” (“New Jobs Come With Lower Wages”, Wall Street Journal)

No worries. Obama and his deficit-slashing buddies in the congress have that all figured out. As soon as the election’s over, President Socialist is going to start kicking people off extended unemployment benefits as fast as humanly possible leaving millions of working people without enough money to house or feed their families. Here’s how it’s all going to go down:

With the start of the new year, there will be no part of the country that offers more than 26 weeks of unemployment benefits. This is far less than the average duration of unemployment, which has hovered near 40 weeks for over a year…..

Despite the disastrous impact of the cuts, it has been largely ignored both by the major media and in the US elections. Moreover, the Obama administration has already let it be known that it will not seek a renewal of extended jobless benefits.” (“Extended jobless benefits end for 500,000 US workers”, World Socialist web Site)

Can you see how nicely this segues with Michelle’s anti-obesity campaign? The administration plans to increase worker “flexibility”, by putting millions of jobless people on a crash diet.

And, don’t kid yourself, unemployment is just one of the many programs that Obama plans to eviscerate following the vote-count. He’s also going to zero-in on Social Security, Medicare and Medicaid. They’re all on the chopping block, every last one of them. That’s what the so called Fiscal Cliff is all about; it’s a public relations hoax to conceal Obama’s plan to dismantle the vital programs that provide medicine, shelter and a meager retirement for the sick, the needy and the elderly, you know, the folks the Republicans refer to as “useless eaters”.

All of these reports (Sentier, Pew, the Fed’s Survey of Consumer Finances) underline the same point, that the middle class is embroiled in a war-to-the-death with carpetbagging vermin who plan to deprive them of work, strip their assets, foreclose their homes, and leave them penniless to face old age. It’s just good old class warfare–and as Warren Buffett opined–his class is winning.

MIKE WHITNEY lives in Washington state. He is a contributor to Hopeless: Barack Obama and the Politics of Illusion (AK Press). Hopeless is also available in a Kindle edition. 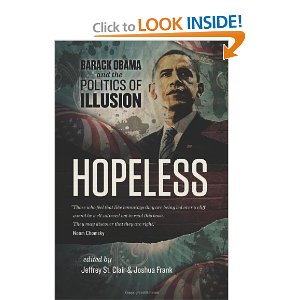