Mark Worsfold, 54, says he was handcuffed by Surrey police officers ‘for not smiling’ while watching men’s cycling road race 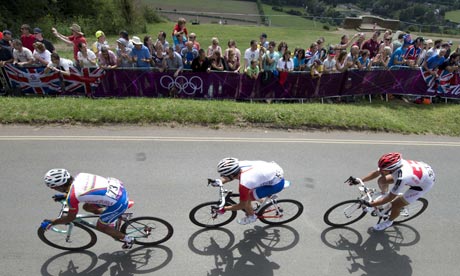 The London 2012 men’s cycling road race was watched by thousands of spectators who lined the route from central London to Box Hill in Surrey. Photograph: Miguel Medina/AFP/Getty Images

A man with Parkinson’s disease who was arrested during the Olympic men’s cycling road race while sitting beside the route has said he wants a “letter of exoneration” from Surrey police, claiming their treatment of him was disproportionate.

Mark Worsfold, 54, a former soldier and martial arts instructor, was arrested on 28 July for a breach of the peace shortly before the cyclists arrived in Redhouse Park, Leatherhead, where he had sat down on a wall to watch the race. Officers from Surrey police restrained and handcuffed him and took him to Reigate police station, saying his behaviour had “caused concern”.

“The man was positioned close to a small group of protesters and based on his manner, his state of dress and his proximity to the course, officers made an arrest to prevent a possible breach of the peace,” Surrey police said in a statement.

Worsfold, whose experience was first reported by Private Eye, claims police questioned him about his demeanour and why he had not been seen to be visibly enjoying the event. Worsfold, who was diagnosed with Parkinson’s in 2010, suffers from muscle rigidity that affects his face. He was released after two hours without charge or caution.

“It could have been done better. I was arrested for not smiling. I have Parkinson’s,” he said, adding that he realised the officers were working long hours and trying to control the event properly, but they had not, in his case, acted correctly. He said he did not want to make further comment until he received a response from Surrey police.

Worsfold, who teaches martial arts in Leatherhead, climbed Mount Kilimanjaro last February for the Save the Rhino charity.

Surrey police said: “There were a number of factors which led officers to make this arrest, including the fact that the race was rapidly approaching, the heightened level of security due to the high-profile nature of the event and the sheer number of spectators in attendance. These were fully explained to the individual concerned. He was given words of advice and released with no further action.”

They added that Worsfold had had “a number of knives” in his possession, but that these turned out to be made of rubber and for use only as display items.

The statement said: “Surrey police has received a letter from the man in which he has said that he ‘fully understands and appreciates the action taken by officers’. He has also said that he ‘appreciated and thanked both the arresting officers for their apologies and explanations’ following his release.”

Chief Superintendent Gavin Stephens said: “Officers were policing huge numbers of people during the Olympic events and in the interests of public safety they acted quickly and decisively based on the information available to them.”

“Parkinson’s is a complex condition, and those living with it can experience a range of different symptoms that can vary almost on an hourly basis. We hope that Mark’s experience will help to raise awareness of this distressing problem and will be a reminder to be careful about making the wrong assumptions about people who have Parkinson’s.”