While all eyes are on the absurdist tragicomedy playing out in Europe, Japan is quietly circling a financial black hole as its export economy is destroyed by its strong currency and the global recession.

As long as Germany stays within the Eurozone, Japan is the primary example of this dynamic. Should Germany leave the euro and return to its own currency, it too will begin orbiting the financial black hole of declining exports driven by a strengthening currency in a global recession.

Economies that are less reliant on exports are much less exposed to the consequences of a strengthening currency.

We can lay out the dynamic of Japan’s currency and export-dependent economy thusly:

1. Export-dependent economies such as Japan, China and Germany rely on strong exports to sustain their employment and growth.

2. This means they must maintain positive current accounts (trade surpluses).

3. As their currencies strengthen, their exports become less competitive globally.

4. Export-dependent economies must pursue strategies to keep their currencies aligned with their buyers, the importing nations.

5. Germany has done so via the eurozone, which aligned its largest import market, Europe, with its own currency.

7. Japan has neither of these advantages, and must intervene in the FX markets by buying and selling yen and dollars.

8. Despite its well-known debt problems (see chart below), Japan retains a massive and diverse industrial base, a current-account surplus (or modest deficit with its nuclear power plants largely offline) and large overseas assets. 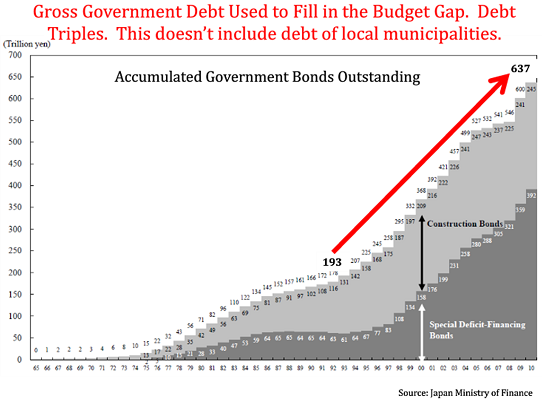 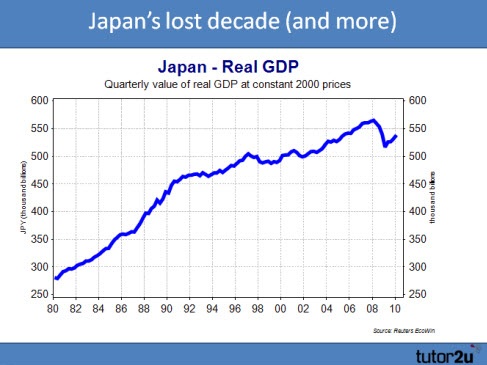 9. These assets, plus its homogeneous culture, makes Japan an island of stability in an increasingly unstable global economy.

10. For these reasons, the yen is considered a “safe haven” currency and yen-denominated bonds as “safe haven” liquid investments.

11. As demand for yen rises, the currency strengthens, weakening the competitiveness of Japanese exports.

12. The “safe haven” status of the yen ends up hurting the Japanese economy’s primary engine, exports.

13. The stronger yen ends up weakening the very attributes that make the yen and Japanese bonds “safe havens.”

14. As the global economy slides into recession, exports decline sharply under the double-whammy of falling demand and a rising currency.

Ironic, to say the least.