America’s largest car firm made $1.5bn in the second quarter of 2012, with European division reporting operating loss of $361m 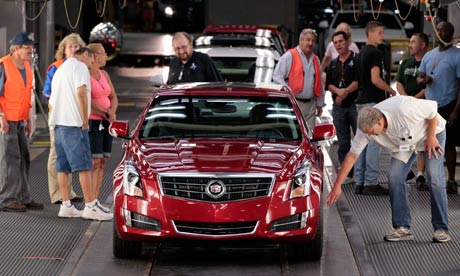 GM’s CEO Dan Akerson said: ‘We have more work to do to offset the headwinds we face.’ Photograph: Jeff Kowalsky/EPA

“Our results in North America were solid, but we clearly have more work to do to offset the headwinds we face, especially in regions like Europe and South America,” said GM chairman and CEO Dan Akerson. “Despite the challenging environment, GM has now achieved 10 consecutive quarters of profitability, which is a milestone the company has not achieved in more than a decade.”

GM’s European division reported an operating loss of $361m, compared with an operating profit of $102m a year ago. GM is attempting to restructure the unit and recently replaced several of its top executives in Europe. The company is planning to close at least one plant in Europe by 2016, but Dan Ammann, GM’s chief financial officer, said there were no immediate plans to announce more job cuts or factory closings in Europe.

In North America, GM reported an operating profit of $1.97bn, which compares to a profit of $2.25bn for the same period a year earlier. The company posted a loss of $19m in South America during the second quarter, and made a profit of $557m in its international division, primarily in China.

While GM’s North America sales remain strong there are signs that the slowdown in the US economy is taking its toll. On Wednesday, GM and Ford announced that sales had slipped in July; GM deliveries fell 6.4% and Ford 3.8%, according to statements. Chrysler increased deliveries by 13%.

GM’s fortunes have recovered dramatically since its emergence from bankruptcy in 2009. The firm said it sold 2.39m cars during the quarter, compared with 2.32m a year ago. GM had $32.6bn in cash reserves and other liquid assets at the end of the quarter.

Its government-backed bailout has become a political hot topic. Mitt Romney has been a persistent critic of the bailout and is running ads that highlight the plight of auto dealerships closed as a condition of the government-managed bankruptcies.

In turn, president Barack Obama has consistently championed the bailouts for saving over a million US jobs and criticised Romney for his 2008 New York Times editorial entitled “Let Detroit Go Bankrupt.”