So get your popcorn ready!

“September will undoubtedly be the crunch time,” one senior euro zone policymaker said. “In nearly 20 years of dealing with EU issues, I’ve never known a state of affairs like we are in now,” one euro zone diplomat said this week. “It really is a very, very difficult fix and it’s far from certain that we’ll be able to find the right way out of it.”

As Europe’s fight with the twin demons of logic and math continues, time is running out. And as eurocrats take their mandatory vacations for a job well done and spend the next two weeks lounging on some Mediterranean island or listening to opera, Europe will enter hibernation mode, courtesy of a slow down in sovereign bond issuance, all of which however will change very quickly once September rolls in which as Reuters describes, “is shaping up as a “make-or-break” month as policymakers run desperately short of options to save the common currency.” It is then that we will find if all that money spent on newsletter promoting active prayer to push the hands of central planners in that direction or the other, was well spent, or just thrown in the same cash black hole which is the final restring place for hundreds of billions in “bailout money” which has achieved nothing but perpetuating the same destructive behavior that it was meant to change.

Reuters explains why September will also be known as the popcorn month:

In that month a German court makes a ruling that could neuter the new euro zone rescue fund, the anti-bailout Dutch vote in elections just as Greece tries to renegotiate its financial lifeline, and decisions need to be made on whether taxpayers suffer huge losses on state loans to Athens.

On top of that, the euro zone has to figure out how to help its next wobbling dominoes, Spain and Italy – or what do if one or both were to topple.

Since the crisis erupted in January 2010, the euro zone has had to rescue relative minnows in Greece, Ireland and Portugal as they lost the ability to fund their budget deficits and debt obligations by borrowing commercially at affordable rates.

Now two much larger economies are in the firing line and policymakers must consider ever more radical solutions.

Following a year of real-time failed rumor, innuendo, speculation, prepackaged ‘bankruptcy that is not a bankruptcy’ negotiations, and much more, Europe has figured out what was patently obvious to everyone. This: 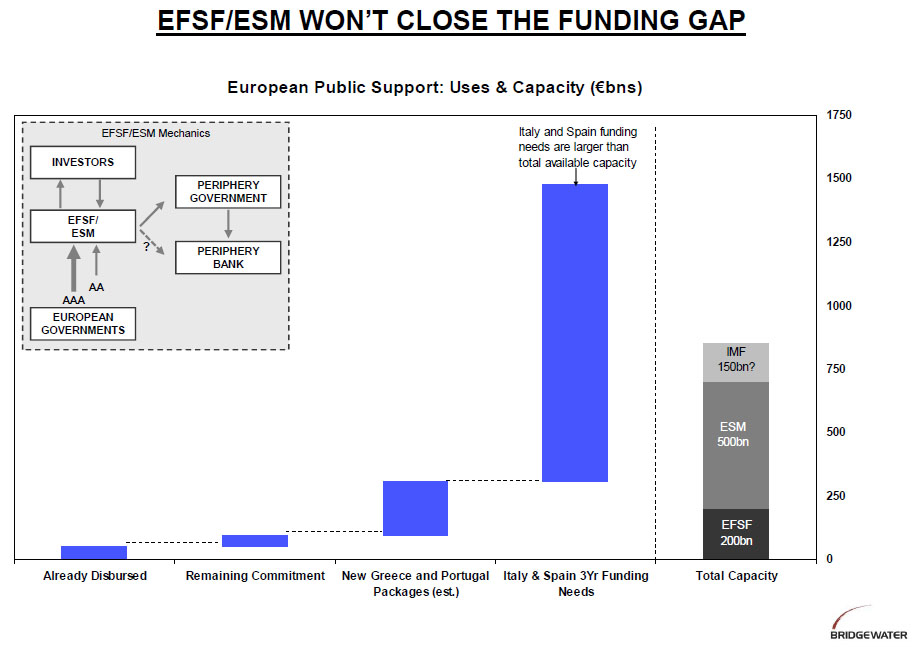 In Reuters’ own words, the life raft is about to go pop:

The euro zone does not seem to have enough cash in the current setup to deal with a scenario of Spain and Italy needing a rescue, and a sense of doom is growing among some policymakers. Fighting the crisis, said the euro zone diplomat, is like trying to keep a life raft above water.

“For two years we’ve been pumping up the life raft, taking decisions that fill it with just enough air to keep it afloat even though it has a leak,” the diplomat said. “But now the leak has got so big that we can’t pump air into the raft quickly enough to keep it afloat.”

Two bailouts in, and one bankruptcy, and Greece is fixed. Not

Compounding the problems, Greece is far behind with reforms to improve its finances and economy so it may need more time, more money and a debt reduction from euro zone governments.

If Greek debt cannot be made sustainable, the country may have to leave the euro zone, sending a shockwave across financial markets and the European economy.

Athens wants two more years than originally planned to cut its budget deficit to below 3 percent of GDP, so as not to impose yet more spending cuts on a country which is already in a depression.

This would mean Greece’s 130 billion euro second bailout package may need to be increased by 20-50 billion euros, according to estimates by some euro zone officials and economists, and there is no appetite in the euro zone to give Greece yet more extra money.

More importantly Greece needs to bring its debt, which is equal to 160 percent of its annual economic output, under control. This means euro zone governments, which own roughly two thirds of it, may need to write part of it off.

Private creditors have already suffered a huge writedown in the value of their Greek debt holdings but so far euro zone taxpayers have not lost a cent on any of the bailouts.

So if Greece “agrees” to more austerity, how long until the rioting paralyzes the economy again, and a new government is elected, one in which Syriza has absolute majority, and the entire June fiasco with Greece potentially leaving the Eurozone out of its own volition is replayed? Not too long it seems. Especially since Schauble, who this weekend has perfected the art of throwing water in people’s faces, just said there will be no more concessions.

But Greece is, once again, just the beginning.

Sept. 12 is a crucial date in the European diary. On that day the German Constitutional Court is scheduled to rule on whether a treaty establishing the euro zone’s permanent bailout fund, the 500 billion euro European Stability Mechanism (ESM), is compatible with the German constitution.

A positive ruling is vital, because Germany is the biggest funder of the ESM, and the euro zone would be powerless to protect Spain or Italy without the ESM.

On the same day, parliamentary elections are held in the Netherlands where popular opposition to spending any more money on bailing out spendthrift euro zone governments is strong. The Dutch vote may complicate talks on a revised second bailout for Greece, which also has to be agreed in September.

Is a ECB impairment next in the cards? And if indeed Draghi takes a haircut on his Greek holdings, how long until he has to do the same with Portugal, Ireland, Spain and Italy? And how long until the EUR is currency only by decree, when even the blindest of the blind realize that the ECB’s balance sheet has a massive capital shortfall, that can only be held together by more printing, something which Germany will hardly be delighted by:

Policymakers are working on “last chance” options to bring Greece’s debts down and keep it in the euro zone, with the ECB and national central banks looking at also taking significant losses on the value of their bond holdings, officials said.

If governments swallowed the bitter pill by also accepting a cut in the value of their contributions to loans already made to Greece, this would break a taboo and could provoke demands for similar treatment from Ireland or Portugal.

Peter Vanden Houte, chief economist at ING bank, said euro governments might be forced to accept a halving of the value of their Greek debt – known in the business as haircut.

“If Greece is to be saved, we must see some debt forgiveness from euro zone governments in the coming years because otherwise Greece is never going to come out of the situation it is in now,” he said. “We are talking about potentially a 50 percent haircut, which would still mean the Greek debt would be (proportionately) around the euro zone average.”

The euro zone would want concessions from Athens. “Most probably in exchange, euro zone partners will be more strict on Greek compliance with structural reforms and may ask Greece to give up some sovereignty,” said Vanden Houte.

In the grand scheme of things, we wonder what is more realistic: Greece handing over the keys to the kingdom to a Belgian, or the ECB getting senior bondholder concessions out of insolvent banks. Frankly, neither. At least not until iTraxx Crossover is over 1000 bps: aka – peak despair.

And then there is Spain and Italy, and the fact that the ESM is insufficient (not to mention still inactive), and the ECB will need to step in. Hope that it would do so, is what sent the market soaring last week. Yesterday, however, Germany made it all too clear that Draghi had made a deal without the devil, and that attempts to bluff Germany into a “certain” outcome just won’t fly.

ECB President Mario Draghi signalled last Thursday the bank was ready to act, indicating it may revive its programme of buying bonds of troubled governments on the secondary market.

“Within our mandate, the ECB is ready to do whatever it takes to preserve the euro. And believe me, it will be enough,” Draghi said. “To the extent that the size of the sovereign premia (borrowing costs) hamper the functioning of the monetary policy transmission channels, they come within our mandate.”

However, Germany has always been hostile to the idea and the Bundesbank said on Friday that it continued to view it “in a critical fashion”.

Spain faces high borrowing costs because investors fear they will not get their money back. The Spanish economy is shrinking, many of its autonomous regions need bailouts from Madrid and banks need the recapitalisation of up to 100 billion euros.

Which, in turn, leaves out those who just bought Spanish bonds, because hope and prayer are a strategy (and remember: Lehman will never fail), out in the cold:

Madrid still has to raise about 50 billion euros on the market by the end of the year. This may be impossible if its funding costs stay well above 7 percent for 10-year bonds.

Draghi’s remarks knocked yields down by more than 40 basis points to below 7 percent on Thursday, but they could quickly climb back if the market does not see firm ECB buying soon.

All this, and much more, is finally coming to a head, as the time for can kicking with hollow promises and words without action is coming to an end: just more than one month from now is when Europe will have to put up or shut up. And we will truly find out how much of a misnomer the “European Union” truly is.

Finally, for those who enjoy a granular walk through for what is in store for Europe, here it is courtesy of Deutsche Bank.