“… the limit of 8000 bq/kg has been surpassed even in facilities processing local garbage in Tokyo, according to the Ministry of the Environment.”

A plan to disperse the waste to incineration facilities across the country, meant to instill national unity, is doing the opposite, and further delaying Japan’s ability to move beyond Fukushima. 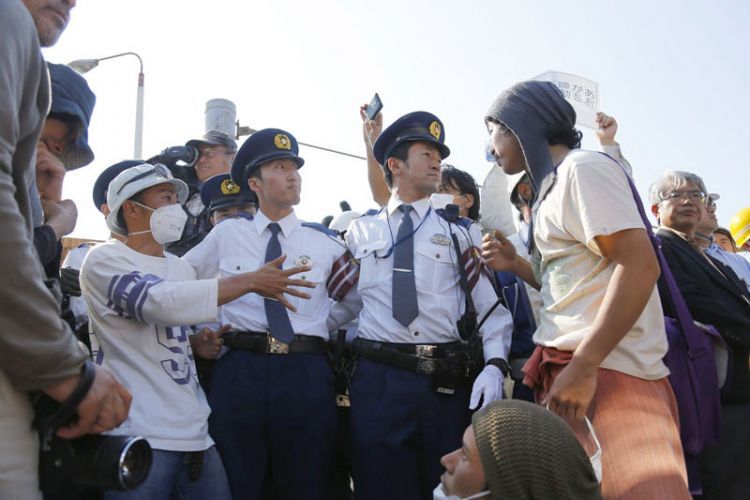 – Japan’s Latest Nuclear Crisis: Getting Rid of the Radioactive Debris (The Atlantic, June 4, 2012):

KITA KYUSHU, Japan — Disposing the more than 20 million tons of rubble caused by the March 11 earthquake and tsunami is proving to be a difficult problem for Japan, not least because much of the rubble has been irradiated by the Fukushima nuclear disaster. The government’s plan — to destroy 4 million tons of potentially radioactive earthquake debris in garbage incinerators around the country — is dividing the nation and further delaying the country’s ability to put Fukushima behind it.

More than a year after the disaster, over 90 percent of the debris from disaster-stricken areas is still sitting around, waiting for disposal. Under a government pledge to clear the rubble entirely by 2014, the Ministry of the Environment is leading an effort to distribute the rubble to municipalities around Japan for speedy incineration and burial. But people across the country have met the plan with strong opposition, objecting that it needlessly spreads radiation to unaffected areas.

Last week, trucks carrying earthquake debris from northeastern Japan arrived in the south-western island of Kyushu, as part of the national government’s plan to disperse and destroy debris. Protestors blocked the road for 8 hours over fears that incinerating the debris would spread radiation to areas that have not yet been contaminated by the nuclear disaster. The waste was burned last Thursday in the first “trial burn” of radioactive tsunami debris to be conducted in this part of Japan.

The protest in front of the main gate of Hiagari Incineration Facility in Kita Kyushu City was the latest in a divisive debate over the effort to ship roughly 20 percent of earthquake debris from the Tohoku region (where Fukushima is located) to municipalities around Japan for incineration. The plan, which calls for shipping the debris as far as the southern most island of Okinawa, has been promoted as a symbol of Japan’s national unity and collective reconstruction effort.

While debris from Fukushima will not be incinerated in the program, due to high radiation levels, municipalities and citizen groups are worried that even debris from neighboring Miyagi and Iwate prefectures could be contaminated enough to be too hazardous to process. Many fear that doing so will not only release radiation into the local atmosphere, but also concentrate it into highly irradiated ash that would be difficult for local municipalities and garbage companies to dispose of safely.

“The government has raised the limit for how radioactive something can be before requiring special disposal by a factor of 80.”

The plan has deeply polarized national opinion. Those in support of “wide area incineration” say it’s necessary to help the Tohoku region, and see their “NIMBY” (Not In My Back Yard) counterparts as selfish and overly concerned about minor levels of radiation. Those against the plan say that the radiation is by no means negligible, and should not be spread to uncontaminated regions. They also point to some of the plan’s odder details, questioning its real intentions.

The debris that was burned in Kita Kyushu on Thursday had been trucked over 620 miles from Ishinomaki City, Miyagi Prefecture, which lies about 70 miles from the stricken nuclear reactors in Fukushima. Radiation data from the test burn was reviewed by a panel, and a comprehensive incineration program is expected to begin sometime in June. Kita Kyushu City has pledged to accept 39,500 tons of debris per year for incineration, and 30 out of the total 47 prefectures across Japan are either engaged in or considering similar programs.

The government insists that its radiation limits ensure that the program will pose no health risks to surrounding residents. Those limits, however, have been significantly relaxed since the disaster at Fukushima. Radioactivity is measured by becquerel per kilogram, or bq/kg. Previously, Japanese regulations required nuclear waste with 100 or more bq/kg of Cesium to be monitored and disposed of in specialized containers. But the new limit for debris in the “wide area incineration” program is 240 to 480 bq/kg. Because radioactive particles accumulate and concentrate in the ash of burned rubble, the material headed for local landfills could be significantly more radioactive. The new government limit for material headed for landfills is 8000 bq/kg, 80 times the pre-Fukushima limit.

Because garbage incinerators inevitably serve as collecting grounds for radiation spread across large areas, in some cases, the limit of 8000 bq/kg has been surpassed even in facilities processing local garbage in Tokyo, according to the Ministry of the Environment. Such stories have exacerbated fears that incinerating debris from areas even closer to Fukushima could produce potentially hazardous irradiated ash.

While the government insists on the necessity of removing rubble from the earthquake region as quickly as possible, critics point out that the government plan calls for 80 percent of the debris to be burned locally, and say that transporting only 20 percent of the feared waste to incinerators around the country makes little sense. After all, if the goal is to remove debris from the area, why is the vast majority of it staying there?

It’s still not clear why the Japanese government has decided against a policy of containing, rather than dispersing, the radioactive debris. Even if radiation levels were safe, as the authorities claim, the financial and political costs of the plan are tremendous. Japanese tabloids and blogs buzz with theories about the state’s true motivation, speculating that the program is meant to bolster struggling municipalities, as well as transportation and sanitation companies, who could use the government cleanup funds as financial stimulus. Japan has allotted approximately $5.5 billion for cleanup efforts in 2012 alone.

Containment would also mean solidifying the already-worrisome invisible border between “contaminated” and “un-contaminated” areas, with the former unfairly stigmatized. This subjective differentiation, called “rumor damage” in Japanese, currently affects everything from land prices to the value of local produce, and has already dealt a crippling blow to the Tohoku economy. Maybe that’s part of the “wide area incineration” motivation: rather than dooming an entire region to long-term “contaminated” status, it makes every region in Japan share the burden of the radiation taboo. If everyone is “contaminated,” then, in a relative sense, no one is.