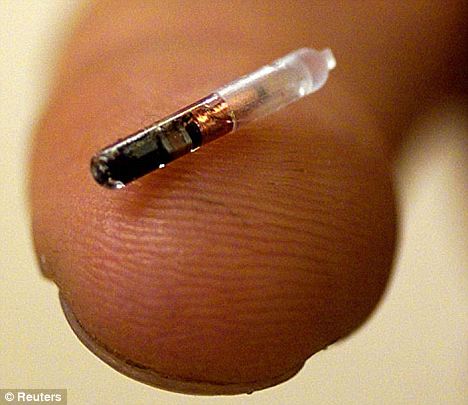 A tiny identity tag microchip for a dog; millions face footing a £35 bill

Microchip for every new pup: Millions face £35 bill as ministers unveil hi-tech scheme to tackle the scourge of dangerous dogs

Millions of dog owners will have to pay for their pets to be fitted with a microchip as part of a controversial crackdown on the menace of dangerous animals.Ministers are due to announce on Monday that every newborn puppy should be microchipped in an operation costing around £35.

The chip will contain details of the dog’s owner and address, which will be stored on a central database to which the police and the RSPCA will have access.

The Government insists the plan will make it easier for the police to trace the owners of violent dogs and ensure they can be prosecuted for not keeping them under control.

But there are concerns that the scheme will only hit responsible dog owners, because many breeders of vicious dogs will not obey the law.

So while owners of gentle breeds such as poodles and golden retrievers are likely to dutifully pay up to have the chips installed under the skin, rogue breeders, who tend to produce rottweilers and pitbull terriers, could continue to evade the law.

Critics say the proposal will also be a bureaucratic nightmare, because of the need to maintain a huge database to store the information on the chips.

Under the plans, to be unveiled by the Department of the Environment, Food and Rural Affairs, only newborn puppies will have to be microchipped.

Some animal welfare groups want to see this gradually extended to cover all of Britain’s eight million dogs.

The Kennel Club and the Dogs’ Trust are among campaigners welcoming the changes, because they say it will help to return lost dogs to their homes.Trevor Cooper, a solicitor from www.doglaw.co.uk, said: ‘This is fantastic on welfare grounds.

It will make it much easier to trace the person responsible for a dog, but on the question of whether it will prevent attacks in the first place, this is not a magic wand.

‘A chip will not make a dog less vicious.

‘This is not a solution to the dangerous dog problem.

But hopefully chipping will make the dog owner more responsible.

‘Those who comply most readily with the law are those who will see the benefit of it. But sadly there will always be some people who do not comply with the law.’

Neil Parish MP, chairman of the All-Party Parliamentary Group on Animal Welfare, welcomed the proposals but did have a warning.

‘If we’re not careful we’re going to make things more difficult for legitimate dog owners, and not solve the real problem of dangerous dogs,’ he said.

‘We have got to find the dogs who are being bred illegally by people who mix breeds to create potentially vicious dogs.

‘It’s not so much the dogs that should be targeted, but the owners who train them to be vicious that must be targeted.’

He said council officers, environmental health staff and police should have extra powers to search for dogs and ensure potentially dangerous animals are microchipped.Victoria Brown, public affairs manager at the Kennel Club, said councils were spending £57million a year on finding homes for lost dogs because there is no way to return them to their owners.

Although she welcomed the plans, she had some concerns.

‘We are worried that this is being sold by ministers as an issue around dangerous dogs,’ she said.

‘If ministers say these chips will allow us to contact you if your dog does something wrong, then people will be frightened to comply.

‘It should instead be presented as a way to enable people to find their much-loved pet again if they go missing.’

The microchipping plan follows a major increase in the number of dangerous dogs seized, and a rise in attacks on children.

In February, peers were told that there were more than seven attacks on guide dogs by other dogs every month.

Lord Taylor, an environment minister, said: ‘We are close to finalising a package of measures to tackle irresponsible dog owners.

‘We see microchipping as part of the measures we can do to address an increasing problem.’

But Lord Renton of Mount Henry, a former Tory minister, urged the Government to think carefully before insisting on compulsory microchipping because many dogs ‘took badly’ to having a chip inserted.

‘Surely anyone who cannot control their dog should not have one,’ he said.

And Philip Davies, Tory MP for Shipley, said: ‘My instinct is that it is likely to end up penalising responsible dog owners.

The danger is that you introduce a new tax, and all the bureaucracy that goes with it, on law-abiding dog owners while making no impression on the irresponsible ones.’

Around 58 per cent of owners have already had their dogs microchipped.

The procedure is usually carried out by a vet and involves a chip around the size of a rice grain being implanted under the skin of the dog, between the shoulder blades, using a needle and syringe.

Once in place, it can be read using a hand-held device and updated when the dog is sold or the owner moves home.