– Elementary school has their students search for hotspot around the school (Fukushima Diary, Mar 28, 2012):

Japanese elementary school have their students measure radiation at a class and one of them found a hotspot of 0.8?Sv/h on the roof of the building.

The school is in Hayama, near Kamakura.

In the end, they removed the contaminated soil and leaves to bury underground.

This is the report of the board of education.

On 2/14/2012, the students of the fifth grade in Hayama elementary school (10 years old) measured radiation around the school building by using the dosemeter given by MEXT. It was the class of environment education, to study radiation. As the result, a student found out the hotspot of 0.8?Sv/h in gutter of the rooftop of the building.

At 16:00, the principal reported it to board of education. 0.7~0.8?Sv/h was measured in the second check. Soil and dead leaves were removed.

After the decontamination, it went down to 0.04~0.05?Sv/h. The removed soil and dead leaves were put into double plastic bags and beried 1m underground.

All the public schools and nursery schools will measure radiation level around gutter etc from now. In case they find hotspot, it shall be decontaminated. 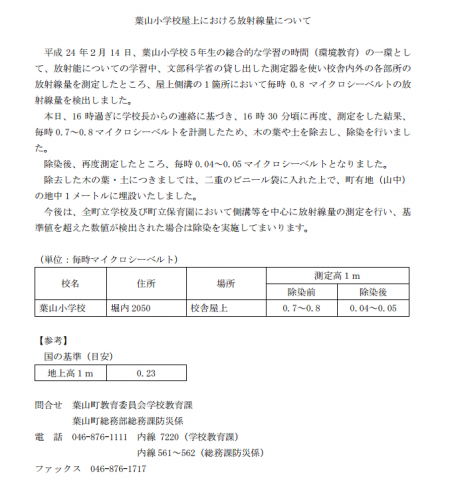