We were speechless when we read this from Bloomberg.

The Bank of Israel will begin today a pilot program to invest a portion of its foreign currency reserves in U.S. equities.

The investment, which in the initial phase will amount to 2 percent of the $77 billion reserves, or about $1.5 billion, will be made through UBS AG and BlackRock Inc. (BLK), Bank of Israel spokesman Yossi Saadon said in a telephone interview today. At a later stage, the investment is expected to increase to 10 percent of the reserves.

A small number of central banks have started investing part of their reserves in equities. About 9 percent of the foreign- exchange reserves of Switzerland’s central bank were invested in shares at the end of the third quarter, the Swiss bank said on its website.

The investment will be made in equity index trackers and will include between 1,500 to 2,000 shares, among them stocks like Apple Inc. (AAPL), Saadon said.

The Bank of Israel today began investing a small part of its $77 billion in foreign currency reserves in US stocks. The central bank’s latest Markets Division report states that the new Bank of Israel Law (5770-2010) allows the Bank of Israel to make equity investments, and that it began to do so today.

The Bank of Israel will invest $1-1.5 billion in US stocks, 2% of its portfolio. The report adds that the Bank of Israel has been investing in public bodies in developed countries since 2010.

The Bank of Israel said that the investments in US stocks would be made through UBS AG (NYSE; SWX: UBS) and BlackRock Inc. (NYSE: BLK) The Bank of Israel’s Markets Division, which specializes in bond investments, will not be handling the equity investments. It added that the traders will have very limited discretion, and that they may only quote leading indices, in order to reduce the risk.

“We have almost no exposure to countries with big problems. We constantly examine where we invest the foreign currency reserves, and I can promise you that you can relax,” Governor of the Bank of Israel Prof. Stanley Fischer said at a closed conference in mid-January.

“The Bank of Israel does not disclose the currency composition of its portfolio, especially not the composition of its equity portfolio,” says the Bank of Israel. At the January conference, Fischer said, “Imagine if we were to begin publishing where you invest, so when you stop buying the bonds of a particular country, and this is published, we’ll get complaints. That is why we do not publish.” He added, “We have an external committee that conducts the examinations. You can assume that we’re aware to the fact that there are problems in certain countries.”

In other words, while the Fed’s charter forbids it from buying US equities outright, it certainly can promise that it will bail out such bosom friends as the Bank of Israel, the Swiss National Bank, and soon everyone else, if and when their investment in Apple should sour.

Luckily, this means that the exponential phase in risk is approaching as everyone will now scramble to frontrun central bank purchases no longer in bonds, but in stocks outright, leading to epic surges in everything risk related, then collapse and force the Fed to print tens of trillions to bail everyone out all over again, rinse repeat, until this chart becomes asymptotic. We say luckily, because it means that the long overdue systemic reset is finally approaching. 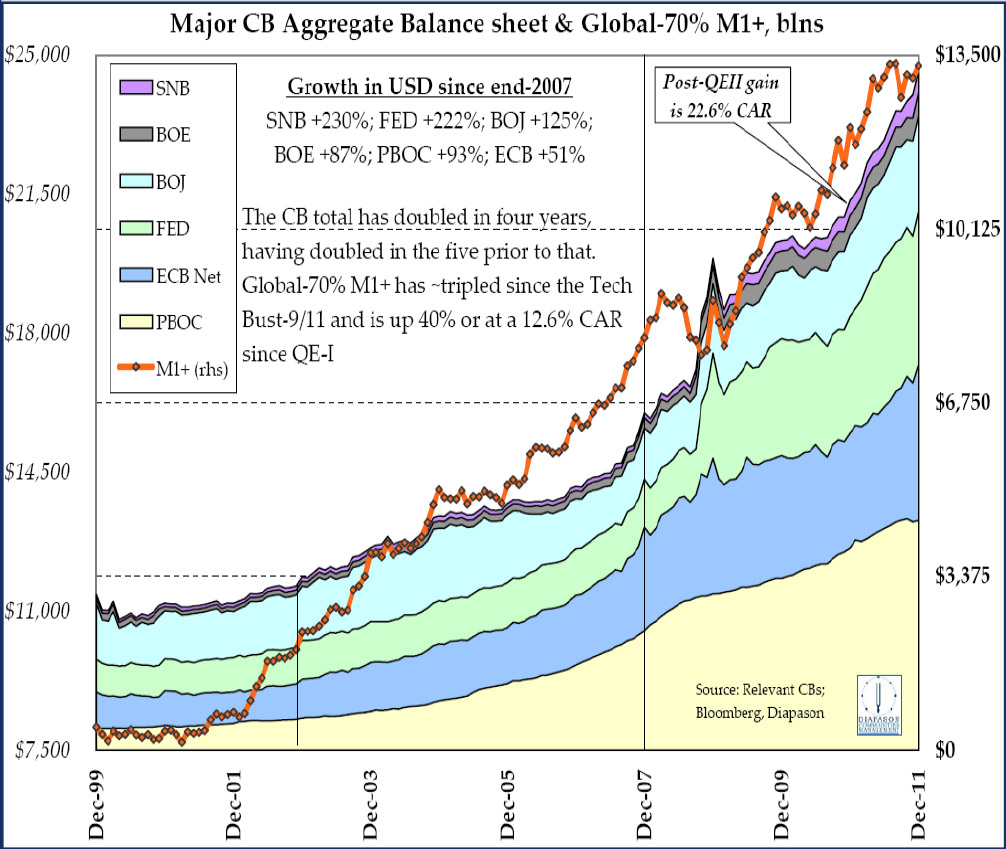