– FBI Says Activists Who Investigate Factory Farms Can Be Prosecuted As TERRORISTS! (Video) 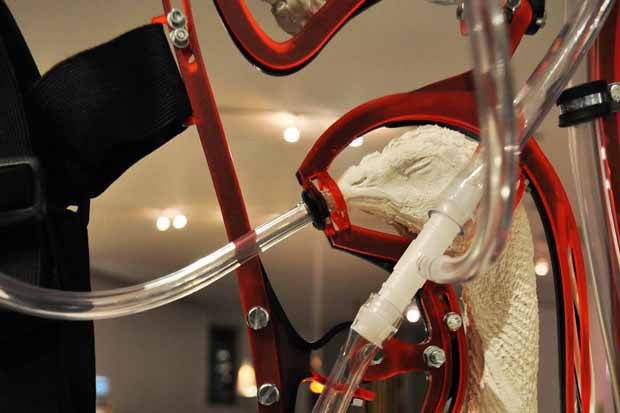 Architecture student André Ford has proposed a new system for the mass production of chicken that removes the birds’ cerebral cortex so that they don’t experience the horrors of being packed together tightly in vertical farms.

Each year, the UK raises and kills around 800 million broiler chickens for their meat. These creatures are grown in vast sheds with no natural light over the course of six to seven weeks. They are bred to grow particularly quickly and often die because their hearts and lungs cannot keep up with their body’s rapid growth.

Philosopher Paul Thompson from Purdue University has suggested ” The Blind Chicken Solution“. He argues that chickens blinded by “accident” have been developed into a strain of laboratory chickens that don’t mind being crowded together as much as normal chickens do. As a result, he argues, we should consider using blind chickens in food production as a solution to the problem of overcrowding in the poultry industry. He argues that it would be more humane to have blind chickens than ones that can see.

Ford goes a step further and proposes a “Headless Chicken Solution”. This would involve removing the cerebral cortex of the chicken to inhibit its sensory perceptions so that it could be produced in more densely-packed conditions without the associated distress. The brain stem for the chicken would be kept intact so that the homeostatic functions continue to operate, allowing it to grow.

Ford proposes this solution for two reasons: to meet the rising demand for meat, particularly poultry, and to improve the welfare of the chickens by desensitising them to the unpleasant reality of their existence.

After this “desensitisation”, the chickens could then be stacked into huge urban farms with around 1,000 chickens hooked up to each large vertical frames — a little like the network of pods the humans are connected to in The Matrix. The feet of the chickens would also be removed in order to pack more in. There could be dozens of these frames in the vertical farming system, which Ford refers to as the Centre for Unconscious Farming. Food, water and air would be delivered via a network of tubes and excrement would be removed in the same way. This technique could achieve a density of around 11.7 chickens per cubic metre instead of the current 3.2 chickens achieved in broiler houses.

A challenge for Ford’s system would be the lack of muscular stimulation. However, Ford proposes using electric shocks similar to that used in other lab meat experiments.

He added: “There are numerous differences between the current dominant production systems and the one I am proposing, but the fundamental difference is the removal of suffering. Whether what I am proposing is an appropriate means to achieve the removal of suffering is open to interpretation. In reality this should be decided at the level of the individual consumer, at the counter, handing over their money and ‘voting’ for their system of preference.”

Ford believes that the Headless Chicken Solution has the same intentions as the lab-grown meats we have seen developed recently. “The intentions are the same — the synthesis of animal protein without the suffering,” he says. However, he believes that the inability to synthesise blood vessels will prove to be a major challenge for those seeking to create 3D chunks of lab meat.

The likeness to The Matrix has not gone unnoticed by Ford. “The similarities are patent, although in The Matrix the dominant species were kind enough to provide the sub-species with a alternate reality, which was far better than the their ‘real’ post-apocalyptic world,” he told us. “This was a lovely gesture by ‘The Machines’, but the chickens in this system will not be privy to such a luxurious appendage to an already elaborate system, especially in this age of austerity.”