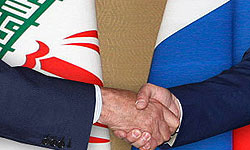 TEHRAN – Iran and Russia have replaced US Dollar with their own currencies in their trade ties, a senior Iranian diplomat announced on Saturday.

Speaking to FNA, Tehran’s Ambassador to Moscow Seyed Reza Sajjadi said that the proposal for replacing US Dollar with Ruble and Rial was raised by Russian President Dmitry Medvedev in a meeting with his Iranian counterpart Mahmoud Ahmadinejad in Astana on the sidelines of the Shanghai Cooperation Organization (SCO) meeting.

“Since then, we have acted on this basis and a part of our interactions is done in Ruble now,” Sajjadi stated, adding that many Iranian traders are using Ruble for their trade deals.

“There is a similar interest in the Russian side,” the envoy stated, adding that that Moscow is against unilateral sanctions on Iran outside the UN Security Council, specially the recent sanctions against Iran’s Central Bank (CBI).

“The move (imposing sanction on the CBI) is unacceptable. Russians have clearly announced that they will not accept these sanctions and Iran’s nuclear issue is resolvable just through negotiations.”

Iranian President Mahmoud Ahmadinejad hit back at the US after Washington introduced new sanctions against Iran’s central bank.

President Ahmadinejad told an annual meeting of senior central bank officials that Iran’s central bank would respond with “force” to the new US sanctions intended to pressure Tehran to abandon its nuclear program.

He said the bank was strong enough to defeat “enemy plans”.

The extra US sanctions aim to squeeze Iran’s oil sales, most of which are processed by the central bank, although many even in the West believe that the move would prove futile.

During the last two years, Iran has been replacing dollar with other currencies in its trade with the outside world.

Iran has replaced dollar in its oil trade with India, China and Japan. Late in November, the Reserve Bank of India (RBI) issued the needed permission to the Central Bank of Iran to open rupee accounts with two Indian banks, namely UCO and IDBI, as a long-lasting solution to the two countries’ payment problems.

Both accounts were opened in the respective banks’ Mumbai branches.

A top official of city-based UCO Bank said while payments for his country’s oil imports would initially be in rupees, it would be then converted into a separate currency, which was yet to be decided by the apex bank.