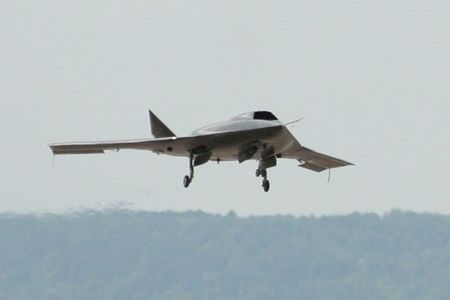 A senior Iranian military official says Iran’s Army has shot down a remote-controlled reconnaissance drone operated by the US military in the eastern part of the country.

The informed source said on Sunday that Iran Army’s electronic warfare unit successfully targeted the American-built RQ-170 Sentinel stealth aircraft after it crossed into Iranian airspace over the border with neighboring Afghanistan.

He added that the US reconnaissance drone has been seized with minimum damage.

The RQ-170 is a stealth unmanned aircraft designed and developed by Lockheed Martin Company.

The US military and the CIA use the drone to launch missile strikes in Afghanistan and in Pakistan’s northwestern tribal region.

The unnamed Iranian military official further added that “due to the clear border violation, the operational and electronic measures taken by the Islamic Republic of Iran’s Armed Forces against invading aircraft will not remain limited to the Iran’s borders.

The report comes as the United States has beefed up its military presence in and around the Persian Gulf region in recent months in the wake of popular uprising in Bahrain.

The US Department of Defense says Washington is closely monitoring the developments in Bahrain, which is the headquarters of the US Navy’s Fifth Fleet and holds some 4,200 US service members.

Iran’s military said on Sunday it had shot down a U.S. reconnaissance drone aircraft in eastern Iran, a military source told state television.

“The spy drone, which has been downed with little damage, was seized by the Iranian armed forces.”

Iran shot down the drone at a time when it is trying to contain foreign reaction to the storming of the British embassy in Tehran on Tuesday, shortly after London announced that it would impose sanctions on Iran’s central bank in connection with Iran’s controversial nuclear enrichment programme.

Britain evacuated its diplomatic staff from Iran and expelled Iranian diplomats in London in retaliation, and several other EU members recalled their ambassadors from Tehran.

The attack dragged Iran’s relations with Europe to a long-time low.

Washington and EU countries have been discussing measures to restrict Iran’s oil exports since the United Nations nuclear watchdog issued a report in November with what it said was evidence that Tehran had worked on designing an atom bomb.

The report says the plane was an RQ170 type drone and is now in the possession of Iran’s armed forces. The Fars news agency is close to the powerful Revolutionary Guard.

Iran is locked in a dispute with the U.S. and its allies over Tehran’s disputed nuclear program, which the West believes is aimed at the development of nuclear weapons. Iran denies the accusations, saying its nuclear program is entirely peaceful.

It appears Iran plans to retaliate:

Iran’s response to the downed U.S. drone’s violation of its airspace will not be limited to the country’s borders, a military source told state television.

“The Iranian military’s response to the American spy drone’s violation of our airspace will not be limited to Iran’s borders any more,” Iran’s Arabic language Al Alam television quoted the military source as saying, without giving details.

Iran said in July it had shot down an unmanned U.S. spy plane over the holy city of Qom, near its Fordu nuclear site.

As a reminder from Stratfor, here is how the US navy was deployed most recently as of Wednesday. Looks like life for the Stennis boys is about to get exciting. 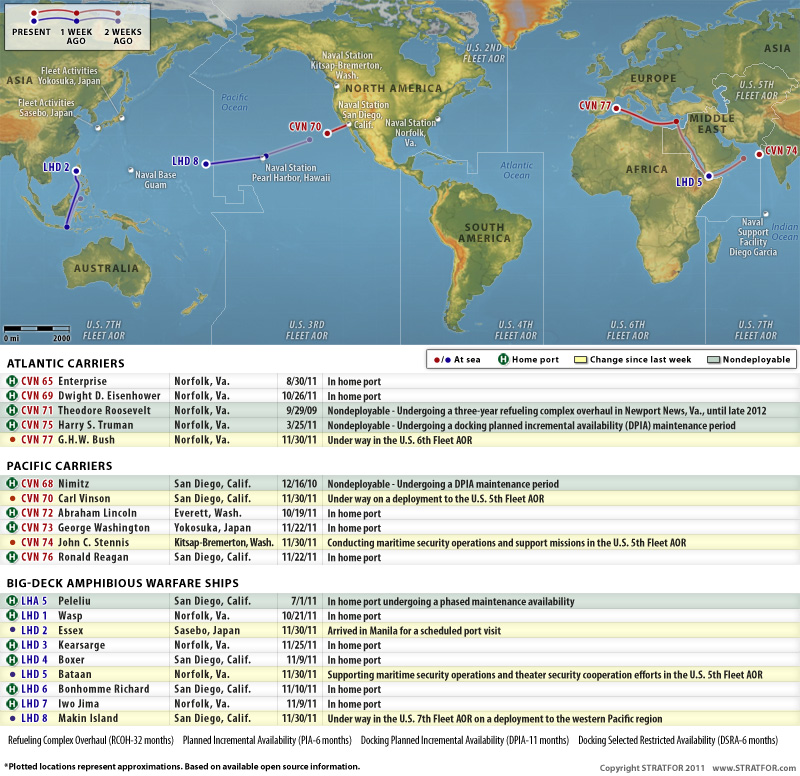