Global warming is a scam, rises in CO2 lag 800 years behind temperature rises and CO2 does not control the climate (also the amount of carbon released by humans is negligible compared to nature). 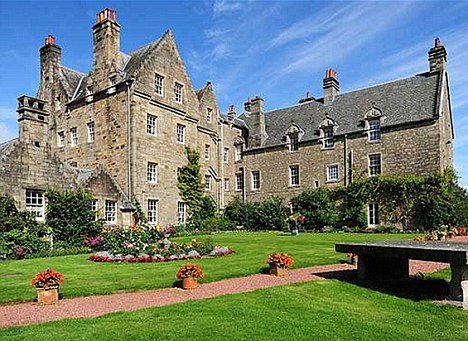 Weekend retreat: Blair Castle, which has 20 bedrooms and a heated outdoor swimming pool

He is the climate change minister who pledged to ‘lead by example’ in the fight against global warming.

But Charles Hendry is facing accusations of hypocrisy after buying himself a 20-bedroom castle – with a potentially massive carbon footprint – as a second home.

Blair Castle in Ayrshire, which went on the market for £2.5million, has three storeys, 16 bathrooms and a heated outdoor swimming pool set in 260 acres of beautiful countryside.

It is likely to rack up colossal energy bills during the cold Scottish winter if Mr Hendry plans to heat all 14 bedrooms, two kitchens and four reception rooms in the main castle.

There is also an additional east wing containing another four bedrooms and a two-bedroom ‘housekeeper’s flat’.

It is a recipe for a huge carbon footprint, even before factoring in Mr Hendry’s drive from his Sussex constituency, which is a 965-mile round trip.

The 52-year-old minister has been criticised for his purchase of the luxury home, as his portfolio includes encouraging homeowners to cut their energy use.

In a speech last September, he said: ‘We have pledged to be the greenest government ever. We must lead by example. Leadership from government departments is something we cannot – and will not – shirk.

‘We are not asking others to do things we will not do ourselves.’

Labour MP John Robertson, who is on the Energy and Climate Change Committee, said last night: ‘This is totally out of touch. As a minister telling people to turn down their heating, this will spark fury. There are a lot of pensioners in my constituency who find it hard to heat one room, let alone 20 rooms.’

Mr Hendry, the Conservative MP for Wealden in Sussex, and wife Sallie already own Wilderness Farm, a luxurious converted farmhouse which they bought in his constituency for £750,000 in 2002.

They are believed to have sold their London home for £4.75million this March.

The minister has claimed he is vigilant about not wasting energy at home, saying recently that he never leaves his television on standby, keeps the thermostat down and has replaced all the lightbulbs in his home with energy-saving ones.

The couple will continue to keep Sussex as their main residence but have said every available weekend and holiday will be spent at their new property around 25 miles from Glasgow. The minister said his wife, who works in events management, will continue to run the castle as a five-star venue for corporate entertainment and weddings, bringing in an estimated £170,000 a year.

Mr Hendry told the Daily Mail last night: ‘You can be assured that we will be looking to make this an outstanding example of how energy-efficiency measures can be used to benefit an old building and also the most appropriate renewable heat technologies to reduce dramatically the building’s carbon footprint. Of course, this is further work that will bring benefits to the local community.’

Mr Hendry and his wife bought the castle from Luke and Caroline Borwick, descendants of the Blair family which has owned the castle for 850 years, but are understood not to have paid the full asking price of £2.5million.

Mr Hendry, whose father’s family are originally from Ayrshire, worked in public relations before becoming an MP, and has served as Tory  party deputy chairman and chief of staff to William Hague.