An explosion at a Revolutionary Guard base in Iran killed a senior commander in charge of the country’s missile development programme, the authorities have said. 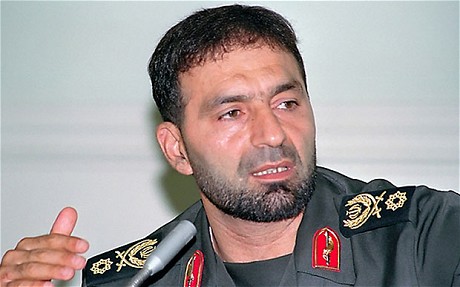 The high-profile status of Brigadier General Hassan Moghaddam will add to speculation that the explosion was an act of sabotage aimed at the country’s nuclear weapons programme Photo: AFP/GETTY

Brigadier General Hassan Moghaddam was said to be “responsible for industrial research aimed at ensuring self-sufficiency of the Revolutionary Guards’ armaments”, a coded way of confirming reports that he was responsible for its missile inventory.

The authorities claimed the explosion was caused by an accident which happened as ammunition was being moved, but the high-profile status of its main victim will add to speculation that it was an act of sabotage aimed at the country’s nuclear weapons programme.

One US-based commentator known to have good sources in Israel’s military community said he had been told it was carried out by the Israeli intelligence service Mossad, co-operating with an exile group, the People’s Mojaheddin of Iran (MEK).

He drew comparisons with an explosion at a base housing Shahab-3 long-range missiles just over a year ago, which killed 18 people and which was also put down by the authorities to a fire in an ammunition depot.

Neither Mossad nor Israel ever claims responsibility for such acts. But Israeli media began speculating immediately as to the nature of the blast, which sent shock-waves from the base at as far away as Tehran 25 miles away to the east. Seventeen people were killed, according to the Revolutionary Guard spokesman, Gen. Ramazan Sharif.

The website of the biggest-selling Israeli newspaper, Yediot Aharonot, said “some assessments” indicated the blast was “the result of a military operation based on intelligence information”.

The US commentator, Richard Silverstein, who has a record of revealing information censored inside Israel, said on his blog that a source had confirmed it as a Mossad operation in collaboration with the MEK. “It is widely known within intelligence circles that the Israelis use the MEK for varied acts of espionage and terror,” he said.

Although such reports are unverifiable, the Iranian nuclear programme has been hit by a series of disasters in the last two years, assumed to be the work of outside agencies, probably Mossad. Last year, a senior nuclear scientist was killed and another injured when their cars were attacked with “sticky bombs” by men on motorbikes.

A highly sophisticated computer worm which caused centrifuges used for enriching uranium to spin out of control was also blamed on Mossad, possibly working with assistance of computer programmers from the United States and Britain.

The explosions last year and on Saturday, if caused deliberately, would appear to be aimed at the Shahab-3, the long-range missile that is geared to strike Israel in retaliation for any raid on the nuclear programme, and which is also suspected of being the intended vehicle for any nuclear warhead.

A report by the International Atomic Energy Agency released last week which renewed calls inside Israel for a pre-emptive strike against Iran’s nuclear facilities focused partly on efforts allegedly being made to fit such a warhead on a missile.

Shahin Gobadi, a spokesman for the MEK, denied “absolutely” that it was involved. “The People’s Mojahedin Organization of Iran (PMOI/MEK) has nothing to do, directly or indirectly, with this explosion,” he said in a statement.

He also noted that the Revolutionary Guard had a reputation for “sloppiness”.

He claimed that Iran’s Supreme Leader, Ayatollah Ali Khamenei, had personally ordered Brig Gen Moghaddam to oversee moving the missiles at the base to a new location in response to the threat of an Israeli strike.

The Iranian authorities denied a more far-fetched claim that the explosion happened as the Guard tried to fit a missile with a nuclear warhead, and insisted there were no suspicious circumstances.

“My colleagues at the Guard were transporting ammunition at one of the depots at the site when an explosion occurred as a result of an accident,” Gen. Sharif said.

As well as the 17 killed, 16 members of the Guard were injured, he said.