The gall and arrogance of the G20 and Euro-nanny finance minister clowns is staggering.

German newspapers report that the G20 discussed asking Germany to pledge its gold to bail out Greece and the Piigs, and to fund the EFSF.

The Bundesbank, Germany’s central bank said “We know this plan and we reject it.”

One might think that would be enough to stop such idiotic talk, but one would be wrong. In spite of Bundesbank opposition, euro zone finance ministers will discuss the idea next week.

The Frankfurter Allgemeine Sonntagszeitung (FAS) reported that Bundesbank reserves — including foreign currency and gold — would be used to increase Germany’s contribution to the crisis fund, the European Financial Stability Facility (EFSF) by more than 15 billion euros ($20 billion).

The European Central Bank (ECB) would own the reserves, according to the paper, citing sources at the G20 meeting held in Cannes this week.

G20 leaders in Cannes discussed the idea that the European System of Central Banks could pawn their total foreign exchange reserves of 50-60 billion euros to a trust of the European crisis fund in the form of special drawing rights from the International Monetary Fund (IMF), the newspapers said.

“We know this plan and we reject it,” a Bundesbank spokesman said.

The newspapers had said the issue was taken off the agenda at the G20 following Bundesbank opposition but that it would be debated on Monday at a Eurogroup meeting of euro zone finance ministers.

Grateful for the Arrogance

In spite of the stupidity of discussing something that is not going to happen, here are three reasons to be grateful they did.

ZeroHedge addresses the question “why will this be debated?“

Why will it be debated? Because when at first you don’t succeed, try, try again. Germany may be crossed off the list, but here is who is next in order of appearance. Sooner or later, Europe will stumble on that one “leader” whose gold is less valuable than their political stability. 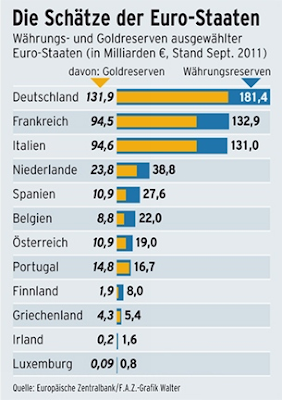 If France and Italy want to expand the EFSF, why don’t they pledge their own gold rather than asking Germany to pledge its gold?

One possible answer is that any country dumb enough to pledge its gold will very quickly lose its AAA rating. However, the Euro-nanny finance minister clowns are probably not bright enough to figure that out.

– Bilderberg Merkel Warns Of War In Europe If Euro Fails

The bailout and the euro will FAIL: